Resurrecting a beloved piece of tech can be a trying process when fighting through the mild heartbreak — doubly so if the product has been discontinued. When their old Sony PRS-T1 e-book reader refused to charge after leaving it on their dashboard during a hot day, [Andrea Gangemi] decided to leverage a little techno-necromancy and hack together a fix.

[Gangemi] found the problem to be a battery failure, but there was nary a replacement to be found. An old Motorola mobile phone battery ended up fitting the purpose nicely. Cracking open the e-book reader, de-soldering the old battery and — after deciphering which pins were which — installing the new one was simply done with a fine, high temperature soldering iron tip and Kapton tape to avoid short-circuiting. But hold on — the new battery wouldn’t charge, and the reader displayed a message saying that the battery was over heating; irony, thou art cruel. 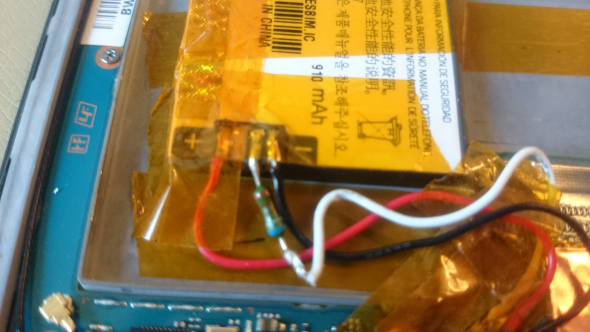 It turns out that the new battery had a different value NTC thermristor which threw off the reader’s safety feature. [Gangemi]’s solution was to solder in a 60K Ohm resistor to offset the NTC value enough to allow the reader to charge — effectively disabling the safety feature in the process. For a low-power device, it’s a small price to pay to have it working good as new.

If you have an old e-book reader kicking around, consider turning it into a message board for your house!

[Thanks for the submission, Andrea Gangemi!]