We fell in love with the Bob robot when we first saw it, and we apparently weren’t alone. There have been a ton of Bob-clones that have refined the basic design. And until Otto, the Spanish Zowi was the coolest that we’d ever seen. 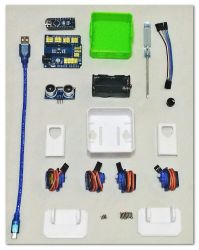 Why is Otto so cool? They’ve tweaked the design so that, with the exception of some fiddly servo screws, everything just snaps together. The printed parts fit easily on a single RepRap bed, so you can practically churn them out. And the rest consists of very cheap commodity parts that you can easily source online. If four hobby servos cost $20, you could get the whole bot done for around $40.

Since this is a Bob clone, the firmware is approximately compatible with the Zowi. Indeed, there have already been people who’ve run Zowi firmware on the Otto (YouTube), adding Bluetooth to make use of Zowi’s cell-phone remote control. Besides the cute-factor, one of the strongest reasons to build yourself a Bob-style robot is the growing code ecosystem, both around Otto and Zowi. So don’t just sit there, get printing and contribute!