Even if you’re not prone to flights of fancy, you might want to keep track of your power line because it can serve as an accurate long-run timebase for projects, or because it can tell you something about the overall health of the grid. 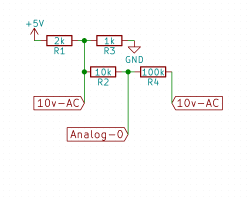 [LDX]’s circuit is as simple as can be. A 10 V AC transformer reduces the mains power down to something reasonable. A resistive divider chops this down further to the range that an Arduino can handle, and then another voltage divider biases the signal to the Arduino’s ADC midpoint. The plus-minus 10 V signal thus swings between 0 and 5 V, just.

SPOILERS! After confirming that there was a higher-frequency wiggle superimposed on top of the power-line frequency, he . got a tip in the comments to his project from someone named [Denver]. The system is called Decabit and it’s used to control street lights, hot water boilers, and other public infrastructure that might want to be coordinated to run when power is cheap or when it gets dark. The PDF that he links to explains it all, so you can take your tinfoil hat right back off.
But we still think it’s a fun project to look into the power lines. Who knows what other people will find? CON-spiracy!

69 thoughts on “Decabit: Or The Conspiracy Theory That Wasn’t”