Right now the wearables market is suffering, even more than the Internet of Things, from the platform problem — people are building platforms, rather than products. This often happens when people, or companies, see a new emerging technology but don’t quite know what to do with it yet. The problem continues until the platforms are good enough, or widespread enough, that people will automatically pick an existing one rather than reinventing the wheel. They start, in other words, to build products. Although it’s happening painfully slowly, the Internet of Things is starting to drag its way out of the platform problem — but the same can’t be said of wearables.

Arguably perhaps, one of the main reasons that the Internet of Things has taken off is Bluetooth LE, and Apple moving it outside of its restrictive MFi program. Bluetooth LE hardware is cheap, readily available, and easier to use than previous Bluetooth standards. It also uses very small amounts of power, and has a data rate sufficient for most sensors. It’s a good fit for the Internet of Things, but widespread adoption didn’t happen until manufacturers could make use of it to offload UI tasks to a more suitable platform — the smartphone — and when Apple moved Bluetooth LE outside of the MFi program it solved what I’ve always referred to as ‘the 50% problem’ which was that only half of the world’s smart phones could talk to sensors and other hardware using it.

What the wearables category needed, and still needs, is something that could similarly drive adoption of simple, cheap, sensors. Something that would allow makers and manufacturers to concentrate function, rather than having to reinvent the wheel for every device, by having to give it its own UI. Which brings us to the smartstrap.

The Smartstrap as a Platform 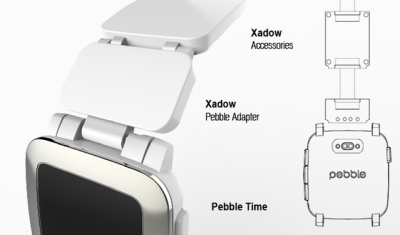 The arrival of the Pebble Time, and the company’s second Kickstarter introduced the smartstrap. The idea was simple, the new watch came with a smart accessory port allowing the straps to connect to the watch, and contain electronics and sensors, that could be interfaced directly with apps running on Pebble Time.

If handled right, smartstrap could easily have proved to be a driver for innovation in the wearable market — allowing manufacturers not only to power their wearables, but to offload UI tasks to a suitable platform, one the user would be carrying with them in any case: the watch they already owned.

Interestingly, the smartstrap was a pretty open standard, and building one was fairly straightforward. Pebble posted mechanical details along with assembly instructions, the only part of the strap that was not available off-the-shelf was the adapter, and Pebble made both STP and STL files available allowing you to print your own, or if you couldn’t be bothered you could always get one from Shapeways.

They also provided a simple suggested circuit—using a single buffer/driver voltage level converter with Zener diodes for ESD protection — to connect a ‘normal’ RX/TX serial connection you might use with an Arduino to the smartstrap.

There are several main areas where I think something like the smart strap could have made a big difference in the current wearables market, enabling manufacturers and makers building a wearable devices by providing a ‘default’ platform.

The first is wearable sensors, for instance medical sensors to measure skin temperature, heart rate, and blood oxygen levels. Despite the apparent success of the quantified self movement there are far fewer Fitbit-like devices than there are watches, and far fewer people willing to clip yet another device to themselves than would be prepared to wear a watch. The relatively long battery life of the Pebble, and its ability to power sensors, would also come into play here especially for applications like sleep tracking.

But when thinking about sensors and the smartstrap it’s important to consider the possibly large installation base. As well as personal sensors it could be possible to use the platform to provide large scale, highly distributed measurements of things like weather and other environmental data.

It’s possible the smart strap could also have provided a vital kick to the indoor location problem. At the moment the smartphone is serving as the default platform for navigation. However it doesn’t necessarily provide the best — or a particularly subtle — UX in that role, especially indoors. You could imaging tactile feedback using the smartstrap for navigation, e.g. turn left, turn right, straight ahead, allowing people to navigate strange buildings more naturally.

In other words, a popular and open smartstrap standard might easily have driven products by being a wearables platform that was “good enough” for people to use instead of having to invent their own.

So Whatever Happened to the Smartstrap?

Pebble set up a $1 million fund to encourage development, and hosted a weekend long hackathon in Boulder, but developer excitement was pretty muted. SeeedStudio brought its Xadow Adaptor to market but, outside of Kickstarter where an NFC payment strap and a GPS strap were funded, few other commercial products were built.

Despite some really interesting one-off devices getting built (one team at the Pebble Hacks Boulder event even built a gramophone dock for the watch) development around the smartstrap platform faltered. It never became a viable option for widespread hobby projects. Without this kind of low-level adoption there simply wasn’t a mechanism to make the smart strap desirable to those who had already adopted the Pebble watch, much less to attract new interest.

Just Ahead of its Time?

Pebble’s next attempt and final at a wearable platform came with its latest Kickstarter and the Pebble Core. As our computing diffuses out into the environment, into wearables and the Internet of Things, it’s realistic to expect that our UI — how we interact with our computing — will also move out away from the ubiquitous smartphone and its screen. The Pebble Core is foreshadowing that trend, essentially a smartphone in a box without a screen, it could serve as the hub of your personal computing. A platform for other wearables and device manufacturers to build around.

With the sale of Pebble to Fitbit, and the likelihood that the Pebble brand will be phased out after the acquisition — Fitbit is after all interested in Pebble’s intellectual property not its devices — it’s possible we won’t see how this attempt at a platform plays out. It’s even possible that the Pebble Core now won’t ship to backers at all. Especially as Fitbit itself isn’t doing all that well.

The Apple Newton is perhaps the most well know poster child for the saying that, behind every successful idea is the same idea done by someone else, just too early. Where Apple failed, at least the first time around, before the iPhone changed everything, Palm succeeded. This time around we know only two things. Firstly that the demise of Pebble and its platform is now mostly assured, and that at least some companies still have faith in the wearables market. Perhaps the next platform will have better luck.

62 thoughts on “The Demise Of Pebble As A Platform”