OSM stands for Oligonucleotide Synthesizer designed for use in Microgravity, meaning that it’s a device that makes arbitrary DNA strands (of moderate length) in space. Cool eh? I’ve been working on this project for the last eight months with a wonderful team of fellow hackers as part of the Stanford Student Space Initiative, and I’d like to share what we’re doing, what we’ve already done, and where we’re going.

Why space? Well, first of all, space is cool. But more seriously, access to arbitrary DNA in space could accelerate research in a plethora of fields, and the ability to genetically engineer bacteria to produce substances (say on a martian colony) could mean the difference between death and a life-saving shot. In short, it’s hard to predict the exact DNA one might need for research or practical use before hand.

First, as Hackaday tends to be a little light on biology terminology, we need to get a little vocabulary out of the way to grease the ways of communication. If you have a Ph.D. in synthetic biology, you might want to skip this section. Otherwise, here are five quick terms that will make your brain bigger so stay with me! 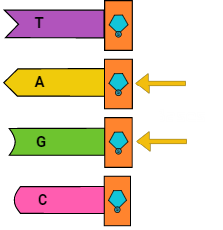 Since DNA is the focus of this project, it’s paramount that one understand DNA before proceeding. But, since most have seen DNA in high school biology courses I’ll keep it short and simple.

First, DNA is a polymer composed of nucleotides. Nucleotides are the building blocks of DNA, and consist of one of four nucleobases — cytosine (C), guanine (G), adenine (A), or thymine (T) — a sugar called deoxyribose, and a phosphate group. Different nucleotides can intermolecularly bond to corresponding nucleotides (A to T; C to G) on a different strand of DNA. If the bases on a strand of DNA are the complements of the bases on another strand, the two polymers can bind and form double-stranded DNA. And, one more note: DNA has two different ends: a three prime (3′) end and a five prime end (5′).

Oligonucleotides are short DNA or RNA molecules and are super useful in general research, genetic testing, and bioengineering. The length of an oligo (short for oligonucleotide) is usually denoted as 30-mer or d30 in the case of an oligo with 30 bases. How short does a strand of DNA have to be to be considered an oligo? Well, back when we were… let’s say not-so-good at DNA synthesis, oligonucleotides were firmly in the 2-50 range. However, with the advent of phosphoramidite (an inorganic DNA synthesis method), oligonucleotides can range from 2-1000+ bases in length.

An oligonucleotide comprised of only one type of base (eg AAAAAA as opposed to AGTCTG) is called a homopolymer.

Terminal Deoxynucleotidyl Transferase, commonly abbreviated to TdT, is a polymerase-like enzyme that can add arbitrary nucleotides to the 3′ end of a DNA strand when certain conditions are met. TdT can append all four nucleotides but shows a preference for guanine (G) and cytosine (C). TdT can be found naturally in immature, pre-B, and pre-T lymphoid cells where it performs genetic diversification for our immune systems by adding bases onto the 3′ (three prime) end of our DNA.

SYBR (pronounced like cyber) is a molecule that binds to DNA forming a DNA-dye-complex that absorbs blue light and emits green light. Moreover, SYBR preferentially binds to double-stranded DNA but will bind single-stranded DNA to a lesser extent.

Goals of Making DNA in Space

Now that we’re speaking the same language, let’s take another look at the goal of making arbitrary DNA in space enzymatically. What exactly does that mean, and why space? Okay, let’s take this word by word:

Adding the ability to manufacture custom DNA in microgravity may mean a huge leap forward in our ability to survive away from Earth. OSM serves as a biohacker’s toolkit for unprdictable problems we will face in new environments when we support life on and around other planets.

In summary, we want to create definable oligonucleotides in the demanding environment of space with a new enzyme-based method. They say set your goals high, right?

Okay, maybe not that high. At least, not initially. Rather than jump in all or nothing, we’ve chosen to take an iterative approach. Now, we are working on launching a “Minimally Viable Product” for a few reasons:

As this is our Minimally Viable Product, we’re taking a small bite out of our overall goal. As such, our MVP will synthesize a homopolymer on the end of an existing oligo rather than create completely arbitrary DNA. We won’t have complete control over its sequence (all in good time) but we will demonstrate a proof of concept of some of our work.

In review, we’re using an enzyme whose purpose is genetic diversification with SYBR Green I, a molecule commonly used for staining gels used in electrophoresis to synthesize DNA in space.

Now, while this sounds simple in practice, synthetic biology always sounds simple. However, in my biology experience, nothing is ever simple. All sorts of data are needed so we can be confident our device will work. What we’ve done so far:

Working with enzymes in space is hard. TdT specifically requires controlled temperatures, buffer solutions, and a non-metal container, all sustained for more than a month in space. Moreover, we need a verification system on board, which means we’ll need fragile filters and visual access to our samples.

Our initial design features a 50μL PDMS (a clear bio-safe silicon-based organic polymer) reaction chamber surrounded by an aluminium heat equalizer heated by Peltier modules. The Peltier modules currently transfer/absorb their heat to/from a generic heatsink rather than something more application specific, as we don’t know what our launch conditions may be. Moreover, a photodiode, filter and LED hug the PDMS reaction chamber, allowing for fluorescence tests to verify experimental success.

As our MVP is just a stepping stone to our ultimate goal, we’ve been working on all sorts of other things. For instance, we’re working on an electrowetting on dielectric device (see right) as a stand-in for conventional microfluidic devices commonly used in space.

We’ve also explored pyrosequencing and synthesis on magnetic beads. Additionally, we talk about DNA so much that we made bare bones DNA visualization software to facilitate conversation. (The DNA pictures in this article were generated by this software.)

However, as far as we’ve come, we’re still flushing out our design and would love any suggestions you might have. Specifically, we’re having problems with finding PCB manufacturers that have sub 1mil minimum trace spacing. Tips, advice and healthy conversation on this are all welcomed in the comments below.