There are two main applications for managing 3D prints and G-Code generation. Cura is a fantastic application that is seeing a lot of development from the heavy hitters in the industry. Initially developed by Ultimaker,  Lulzbot has their own edition of Cura, It’s the default software packaged with thousands of different printers. Slic3r, as well, has seen a lot of development over the years and some interesting hacks. Do you want to print non-planar surfaces? Slic3r can do that. Slic3r and Cura are two sides of the CAM part of the 3D printing coin, although Cura is decidedly the prettier side.

The ability to combine the extensibility of Slic3r with the user interface of Cura has been on our wish list for a while now. It’s finally time. [Josef Prusa] has released PrusaControl, a 3D printing CAM solution that combines the best of Slic3r into a fantastic, great looking package. What are the benefits? What’s it like? Check that out below. 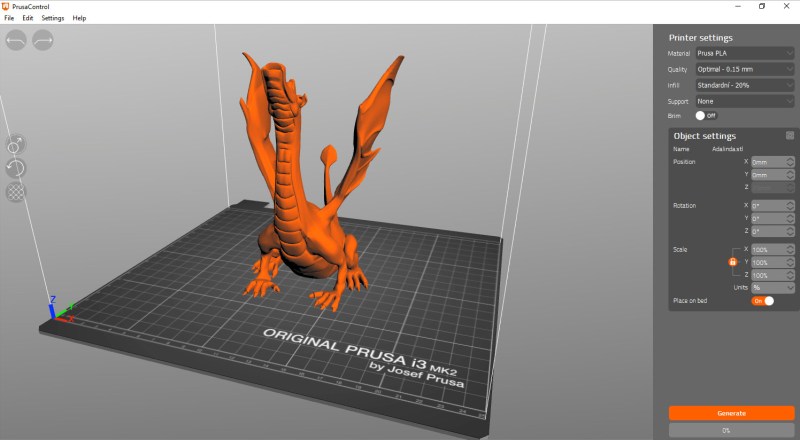 The release of PrusaControl follows just a few months after the release of Slic3r Prusa Edition. The biggest change in this branch of the Slic3r family tree is the addition of variable layer thickness slicing. In short, variable layer slicing allows for very, very high-resolution prints that are only high-resolution where you want a lot of detail.

The variable layer thickness slicing in the Prusa Edition of Slic3r is fantastic. We took a look at one of the first releases, and it does exactly what it says on the tin. In this teardown, I printed a Pokemon that desperately needed low layer height on the top of its head. Using the standard slicer settings for a high-resolution print, I got a printed Pokemon in five hours. Using low-resolution settings, I got a Pokemon in one hour. With the variable layer height settings, I got a fantastic looking print in just over two hours. Variable layer height slicing is one of the killer features of 3D printing. It allows for high resolution while avoiding insanely long print times. The fact that it took so long for such a great feature to make it into one of the standard 3D printing software packages is puzzling.

However, something is rotten in the state of Slic3r. While this may come as a surprise to anyone who has been using it for half a decade, Slic3r is not easy to use. It’s confusing, befuddling, and ugly. No one would ever accuse the GUI of an Open Source program of looking good, but Slic3r is pretty bad.

There are exactly two recommended, free applications used to prepare STLs for 3D printers: Slic3r and Cura (Repetier and ReplicatorG are so 2012, and Simplify3D costs money). Newbies are buying 3D printers by the container load, and manufacturers need an application that is easy to use. Cura will be the default application shipped with all new printers. Its ease of use cuts down on customer support, allowing for a lower cost to the consumer. That’s why Ultimaker loves it, that’s why Lulzbot loves it, and that’s why it’s the slicer recommended by the famous $200 Monoprice printer.

Despite [Prusa]’s position as one of the leading manufacturers of 3D printers, he’s been a Slic3r fan from the beginning. Slic3r is, after all, slightly more extensible with capabilities for modifier meshes, weirder infills, and weird bed shapes. Ease of use means lower support costs, though, so the best solution is a Cura frontend with the Slic3r backend. That’s exactly what PrusaControl is; it takes the slicing engine from Slic3r Prusa Edition and “distils the settings down for the user and put our knowledge to the backend to get the same results.”

Is it for everyone? No, if you’re reading Hackaday, you’re obviously in the 99th percentile of human ambition, capability, and ingenuity. If you’re complaining about a dumbed-down Slic3r, this isn’t for you. PrusaControl is training wheels, and that’s a good thing. We don’t need newcomers to 3D printing to fall on their face all the time.

Given that introduction, what can you do in PrusaControl? Not much, and that’s by design.

The interface is exactly what you would expect from a simplified, Cura-derived slicer. Drop an STL on the PrusaControl window, and the model shows up. You can edit printer settings such as material (various brands of PLA and ABS are included, as are some Taulman and E3D filaments), quality, infill, and if supports should be generated or not. There’s a toggle switch for a brim, and apart from position, rotation, and scale settings, that’s it. PrusaControl doesn’t have the fancy settings. 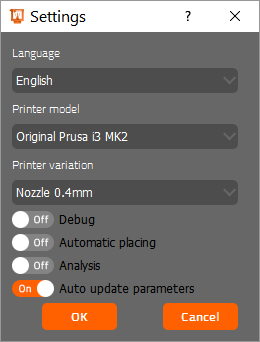 There are a few more options, available from the settings menu. These include the UI language, the model of printer, nozzle diameter, and a few radio buttons for debug. Want to add your printer to that list? You’ll have to edit a few json files. Do you have an enterprising spirit, and have you modified your Prusa i3 for a larger heat bed? You’ll have to edit STL files stored in the depths of your PrusaControl directory.

Is PrusaControl extremely limited? Yes, but that’s the point. You can give anyone a pre-assembled printer and a copy of PrusaControl, and they’ll be printing in fifteen minutes.

3D printing is hard. This may come as a surprise to anyone who has been using a printer since we were making hotends out of nichrome wire. If 3D printing is to grow any more than it already has, the printers and more importantly the software need to be easy to use. If we don’t want a 3D printer to become the 21st century equivalent of the clock on a VCR blinking 12:00, there needs to be an easy to use slicer.

PrusaControl is just that. Yes, it’s limited, but that’s the point.

29 thoughts on “PrusaControl: The Beginner’s Slicer”