Ever hear of the Soviet Luna program? In the west, it was often called Lunik, if you heard about it at all. Luna was a series of unmanned moon probes launched between 1959 and 1976. There were at least 24 of them, and 15 were successful. Most of the failures were not reported or named. Luna craft have a number of firsts, but the one we are interested in is that it may have been the first space vehicle to be stolen — at least temporarily — in a cold war caper worthy of a James Bond novel.

Around 1960, the Soviet Union toured several countries with exhibits of their industrial and technological accomplishments. One of the items on display was the upper stage of a Luna vehicle with windows cut out to show the payload inside. At first, the CIA suspected the vehicle was just a model. But they wanted to be sure.

The story is laid out in a CIA document from 1967 that was only declassified in 1994. Even then, the document has a lot of redactions in it. The paper is sparse on how they managed it, but when the exhibit closed — somehow — a group of intelligence operatives wound up inside the exhibition hall alone for 24 hours.

What they found was surprising. While the engine and most of the avionics were gone, the vehicle was the real article. They took measurements and photos, hoping that analysis would reveal more about the vehicle’s performance characteristics.

Here’s where you start getting into the redacted material. The team was able to get something from the probe — probably machine tooling marks — but there wasn’t enough detail to identify where and how they were made. They decided to get a team specializing in this kind of analysis to examine it more closely.

If you see a picture of a basketball player making a slam dunk and the ball is cut out of the picture, you can probably still guess it is a basketball. In this case, it is obvious from context that the CIA wanted to know the facility that built the capsule. Why? I’ll leave that to your imagination. Charitably, maybe they wanted to break in there, too. Charitably.

The other interesting implication (that could be wrong) is that the CIA apparently had lots of information about tool markings at various Soviet facilities and a well-developed technology for matching those to specific articles. You have to wonder how they would come by this data. There is a reference to a Joint Factory Markings Center so this isn’t some lone expert, but — apparently — a standing group of people studying factory markings. 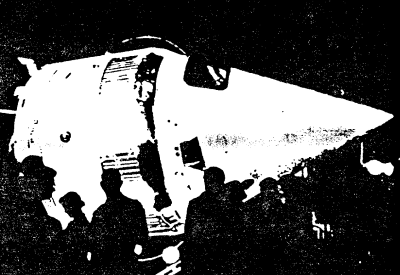 The exhibition moved from town to town on trucks. Again, there are no details about methods, but the CIA intercepted a shipping manifest and found a crate about the size of the probe. Quoting experience, the team wanted to examine the probe either before the show or after. However, by this time the Soviets had a 24-hour guard on the exhibits, so this was not to be.

The four men on the team arrived and bought local clothes. They worked with the local CIA Station to get pictures of the crate and realized that they’d have to enter the 20 foot long and 14-foot high crate via the roof. They bought ladders, ropes, and an assortment of other tools. The CIA then waited for the exhibit to go on the move.

It is interesting to read a simple sentence like “it was arranged to make the Lunik the last truckload of the day…” You have to wonder what the method was to accomplish that. When the truck left, a CIA car was in front of it and behind it. When they were sure the truck had no escorts, it was stopped and the driver was replaced. The original driver was kept in a hotel room overnight — another interesting untold part of the story.

The CIA rented a nearby salvage yard with a ten-foot-high fence surrounding it. Once the truck was there, radio cars patrolled the area to make sure no one would disturb the work. They also had surveillance on the Soviet waiting at the train station to load the crates. He didn’t seem alarmed by the missing crate, ate dinner, and returned to his hotel room.

Finally, the CIA officers allowed the factory marking team to enter the salvage yard. They had to remove part of the roof. They were worried about leaving traces of their break-in, but the crate had been opened so many times that this wasn’t going to be a problem after all.

Dropping ladders in the crate, the team split into two parts. The team at the front removed a window, squeezed inside barefoot, and took pictures. This is pre cell phone cameras, remember, so they sent a roll of film back with one of the radio cars to make sure the pictures came out alright.

The tail section team had to remove 130 metric bolts to gain access to the insides of the engine compartment. There was no engine, but the mounts and tanks would tell them something.

To get access to the payload, they had to cut some wire that had a Soviet seal on them. The wires were cut and given to one of the patrol cars who returned it to the Station so that it could be duplicated immediately. At the end of the evening, an exact copy arrived and the team reassembled the probe. They left at 4 AM. By 5 AM, a driver took the truck away and then turned it back over to the original driver.

You have to wonder why the original driver didn’t report anything. Your imagination runs wild at what must have happened in the hotel room he was kept in overnight. When the railway station Soviet showed up in the morning, the truck was waiting. He didn’t seem surprised and had it loaded onto a train. As far as anyone could tell, the Soviets never knew about this operation.

If you want to read the original account by [Sydney Finer] (and, no, we don’t know if that’s his real name) you can find the original CIA document online. Another good read that is related is the paper “Intelligence for the Space Race” issued in 1961 and declassified in 1994 or 1995.

By the way, the Luna probes had other notable firsts. Luna 1 was the first spacecraft to orbit the sun (it missed). Luna 2 was the first man-made object on the moon (see video below).

Luna 3 took the first photos of the dark side of the moon (see video below). Luna 9 was the first spacecraft to soft land on another planetary body and returned the first close up shots (in stereo) of the moon. The Luna 16 was the first robotic mission to return lunar soil samples in 1970. Along with Luna 20 and 24, they returned about 2/3 of a pound of lunar material to earth.

You can only wonder what the CIA wanted to do with this information. I know that some of the data helped in tracking future flights. You also have to wonder how often the Soviets examined US space hardware.

As a side note, the CIA just released some previously classified material about Sputnik. Some of it is pretty dry, but there are a few interesting tidbits about the evaluation of the threat from the Sputnik program.