The problem with spy planes is they can get shot down. This happened famously when Gary Powers was shot down while flying a U-2 over Russia. The best answer to that is getting higher than your adversary can shoot — and that’s the basic genesis of the famous SR-71 by Lockheed. However, Lockheed proposed several answers, including the D-21. This spy plane had no crew, so while having it shot down — as unlikely as that was — would have been embarrassing, it wouldn’t be as bad as having a pilot on the news confessing to espionage.

The Little Plane that Couldn’t 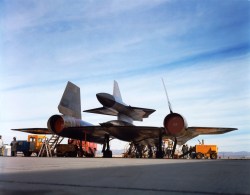 There were 38 D-21’s built. Lockheed skunkworks was responsible, so it is not surprising the craft looks a bit like a tiny SR-71 with swept back delta wings. In fact, the original plan was to launch the plane from a modified SR-71. The plane would streak over its target taking pictures, eject a film bucket — much like a satellite does — and then self destruct. A plane would either snag the film bucket or it could be recovered at sea by a ship.

In 1962, a full-scale mockup was ready, known as the Q-12. The CIA wasn’t very interested, but the air force wanted it not only as a spy plane but as a cruise missile. The 1964 initial tests carrying the thing aloft on a mothership were not promising. At first, the D-21 had aerodynamic covers put on its engines to reduce drag. They found there was no safe way to remove them at Mach 3, so they had to stop flying with the covers.

By 1966 they were trying to actually test launch the D-21. Flying at over Mach 3 at 90,000 feet, the plane was plagued with issues. A hydraulic pump failure took one plane. Another flight was successful, but the film bucket failed to eject.

It was the fourth launch that would convince Lockheed to stop launching from a modified SR-71. The video below shows disturbing footage of the result. The previous launches had the host aircraft make a loop to help separate the two craft. This time they tried from a straight and level flight path. The D-21 had an engine failure which caused it to strike the tail of the SR-71 host. The two crew ejected over the ocean, and the launch control officer, Ray Torrick, drowned before recovery. 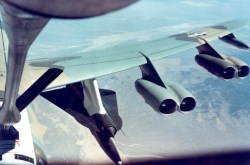 This caused two major changes to the D-21 program. First, a solid rocket booster would push the plane off its carrier. Second, the carrier was to be a Boeing B-52 bomber. The drone would now attach from the top with the bottom carrying the rocket booster which was actually larger than the D-21 (now known as the D-21B).

These changes didn’t do much to change the drone’s luck. The first attempted launch in 1967 saw the drone fall off the carrier early due to a stripped nut. It would take five more attempts before there was a completely successful flight. Of the next five flights, two would be unsuccessful.

By late 1969, the D-21 started its brief operational life. The mission: spy on the Chinese nuclear test site at Lop Nor. The plan was the planes would launch from Guam, fly over Lop Nor, turn around, and fly back over the ocean to deliver the film and self destruct. 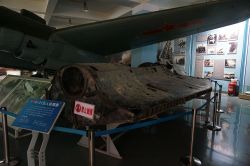 The first mission failed to turn and crashed in the Soviet Union. The second mission worked better but had a fault when trying to eject its film. While the third time was the charm for the D-21, the crew retrieving the film couldn’t say as much. The plane that should have snagged the film bucket in mid-air missed. The Navy destroyer sent to retrieve it in the ocean instead ran it over and the film sunk to the bottom of the ocean. The fourth, and mercifully final, flight crashed over China where it languished for years in a junkyard before going on exhibit at the China Aviation Museum.

By July 1971, the program was done. Satellite imaging was getting better and Nixon had been to China. Of the 38 built, 17 remain in storage at the Air Force boneyard. However, the really interesting thing is what happened to that very first lost D-21.

That first operational flight crashed in what might have been the worst possible place from the United State’s perspective: the Soviet Union. As you might expect, the Soviets gathered up the wreckage and studied it.

The Tupolev Experimental Design Bureau opened project Voron to produce an imitation of the D21. It never flew, but the work provided valuable insights on materials and techniques for supersonic aircraft and missiles. However, by the time Voron would be something to build, the Soviets, too, were betting on spy satellites.

It is amazing how much expense and trouble governments will go through to spy on each other. Of course, all of this was highly classified in its own time. Corona — the first spy satellites — were classified until 1995. Many of the D-21 records were classified until late last year. The last link on that page has some great pictures that are poorly scanned. There are other interesting tidbits including directions on how to deal with public sightings or a crash that is visible to the public.

We always find it interesting to catch up on recently declassified material, especially when it is high tech. Did you know the US stole a Soviet moon lander? But don’t worry, the Russians stole one from the US, too.

All photos are public domain except for: