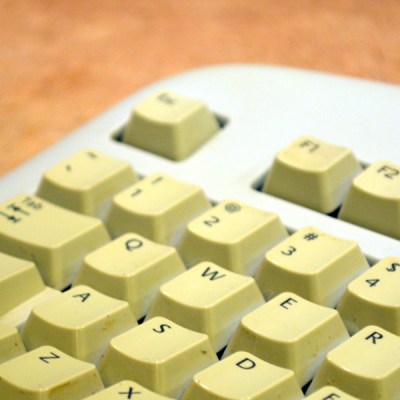 Photodegradation is nature’s way of saying you should be playing more video games indoors instead of being outside. The process is complicated and full of interesting chemistry, but the gist is that the sun puts out a lot of UV radiation, which results in the breaking of the plastic polymer chains and formation of free radicals. Free radicals are atoms or molecules with unpaired electrons that are highly reactive.

Even if the plastic is put away in a box in the basement for a long time, exposure to the sun before boxing can have damaging effects that will cause the material to yellow while in the box. You can see the white keys on this keyboard have turned a sickly yellow since it was taken out of service a decade ago.

Color fade is also a result of UV radiation breaking down the chemical bonds in the dyes. The dye works because its chemical structure reflects only certain wavelengths of light, so when that structure is destroyed, it no longer reflects light the same way.

Photodegradation is a term that refers to the cause, not the effect. Light is doing damage, and not just to color. By breaking down the plastic polymer chains, it’s making the plastic more brittle. This affects PVC pipes and many kinds of rope, and susceptibility to UV radiation should be considered when choosing a material for outdoor use, especially when it’s a rope that is supporting a person.

Just like with other chemical reactions, heat and pressure can speed up the degradation, so even the process of making the plastic can initiate some of the damage that will happen later.

Plastics manufacturers try to combat this effect by putting in additives. These UV stabilizers delay the harmful effects of UV light. The top three UV stabilizers are UV absorbers, quenchers, and HALS, and they are all appropriate for different stages of the photodegradation process. The UV absorber takes the bullets for the plastic, and instead of breaking down it converts it into heat or IR radiation and dissipates it through the polymer matrix. There are lots of UV absorbers, depending on the material and color of the plastic (carbon black is a popular one, but doesn’t work for white or clear plastics). Quenchers are more like doctors in the sense that they save molecules that have been hit with UV light before they can break down. HALS, or Hindered Amine Light Stabilizers, are policemen; they trap free radicals so they can’t do any damage.

It’s common to use all three types of stabilizers in a plastic, but they will only delay the photodegradation. Eventually enough exposure will overwhelm the absorbers, quenchers, and HALS, and the plastic will lose its color and become brittle.

This is another class of additives to plastics, and is another reason why they can yellow over time. One common fire retardant additive is bromine, which is great at keeping the plastic from burning, but not so great at resistance to UV light. The bromine breaks down and becomes free radicals, which then bonds to oxygen. Over time, the bromine migrates towards the surface and the yellowing gets even worse.

As an aside, you shouldn’t laser cut fire retardant plastics because the bromine in it is a halogen that is bad for people and machinery. 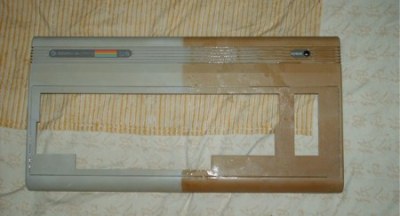 The bad news is that color fade and embrittlement are permanent and can’t be fixed. The good news is that the degradation happens from the outside in, so the yellowing may just be on the surface. For yellowing, there is a technique called retr0brite that has proven successful, and essentially involves using MORE UV light to break apart the bromine-oxygen bonds. Hydrogen peroxide is then used to get in there and fill the broken bonds with hydrogen, making the bromine more stable and reversing the yellowing. Unfortunately, the retr0brite page seems to be disabled, but it can still be accessed through archive.org for more details.

Use only plastics without flame retardant additives, stay away from all windows, and keep your plastic shielded from any source of UV radiation. Or just go about your business and accept that over time, UV radiation destroys everything, including our loved ones, whether they are human or plastic.

62 thoughts on “Yellowing: The Plastic Equivalent Of A Sunburn”