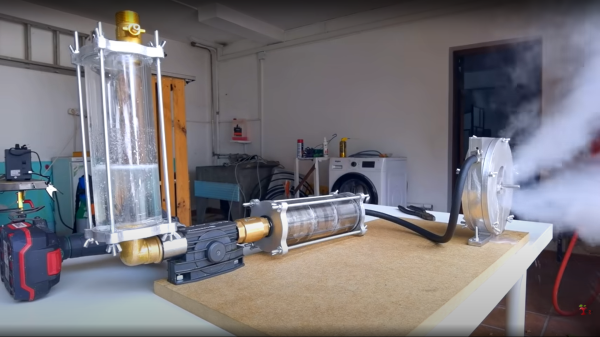 [Integza] never fails to amuse with his numerous (and sometimes really sketchy) attempts to create usable thrust, by pretty much all means possible and the latest video (embedded below) attempting to run a reaction turbine from decomposing hydrogen peroxide, doesn’t fail to disappoint. The inspiration came from the WWII V2 rocket, which used Sodium Permanganate to breakdown Hydrogen Peroxide. This produced high pressure steam, which spun a turbine, which in turn drove the turbopumps that delivered the needed huge quantity of alcohol and liquid oxygen into the combustion chamber.

After an initial test of this permanganate-peroxide reaction proved somewhat disappointing (and messy) he moved on to a more controllable approach — using a catalytic converter from a petrol scooter in place of the messy permanganate. This worked, so the next task was to build the turbine. Naturally, this was 3D printed, and the resulting design appeared to work pretty well with compressed air as the power source. After scaling up the design, and shifting to CNC-machined aluminium, it was starting to look a bit more serious. The final test shows the turbine being put through its paces, running from the new precious metal catalyst setup, but as can be seen from the video, there is work to be done. 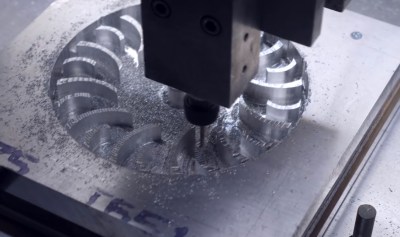 There appears to be a fair amount of liquid peroxide passing through into the turbine, which is obviously not desirable. Perhaps the next changes should be the mount the catalyser vertically, to prevent the liquid from leaving so easily, as well as adding some baffling to control the flow of the liquid, in order to force it to recycle inside the reaction vessel? We can’t wait to see where this goes, hopefully the steam-turbine powered skateboard idea could actually be doable? Who knows? But we’re sure [Integza] will find a way!

With steam power, there’s more than one way to get usable rotational work, like using a reciprocating engine, which can be expanded to a whole machine shop, and whilst boiling water (or catalytically decomposing Hydrogen Peroxide)  provides high pressure gas, how about just using boiling liquid nitrogen? Possibly not.

END_OF_DOCUMENT_TOKEN_TO_BE_REPLACED 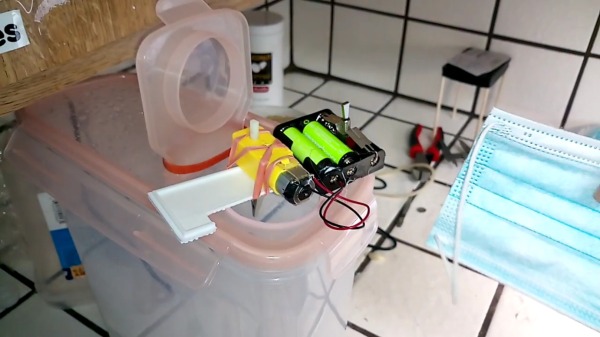 We’ve seen a wide variety of mask sanitization solutions, and now, [spiritplumber] from [Robots Everywhere] brings us a frugal and ingenious design – one that you barely even need tools for. This project might look rough around the edges but looks were never a prerequisite, and as a hacker worth their salt will recognize – this is an answer to “how to design a mask disinfector that anyone can build”.

Local shortages of masks have been threatening communities here and there, doubly so if you need a specific kind of mask that might be out of stock. This design could apply to a whole lot of other things where sterilization is desired, too – improving upon concepts, after all, is our favourite pastime.

The design is simple – a battery-powered motor rotating a mask inside a vat of concentrated H2O2, turned into mist by a cheap ultrasonic misting gadget. As the “turntable” rotates a your PPE of choice, making sure that every crevice is graced with cleaning touch of peroxide, it also causes the H2O2 mist to circulate. Fulfilling most important requirements for a proper sanitization system that more complex devices have been struggling with, this approach has certainly earned its place under the sun.

[Robots Everywhere] have shared a small library of their DIY PPE resources with all of us, and that’s not all they work on – recently, we’ve seen their aeroponics project rejuvenating garlic.

Using hydrogen peroxide vapour for PPE sanitization is a well-tested approach by now, as we’ve seen it deployed back in 2020 on a larger scale as part of an FDA-approved design. And if you only have 3% peroxide at hand, might as well try concentrating it further!

END_OF_DOCUMENT_TOKEN_TO_BE_REPLACED 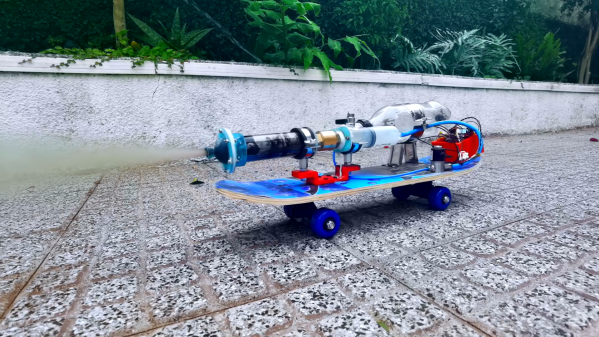 The potassium permanganate catalyst is impregnated into 3D printed porous ceramic parts. The peroxide is then  injected into this matrix via a compressed air mechanism, where it decomposes, creating a jet of water and oxygen that then blasts out of a 3D printed rocket nozzle to generate thrust.

It works surprisingly well, even if it’s a messy and unconventional way to build a rocket. It’s also a lot less fiery than most of [Integza]’s previous projects. Video after the break.

END_OF_DOCUMENT_TOKEN_TO_BE_REPLACED 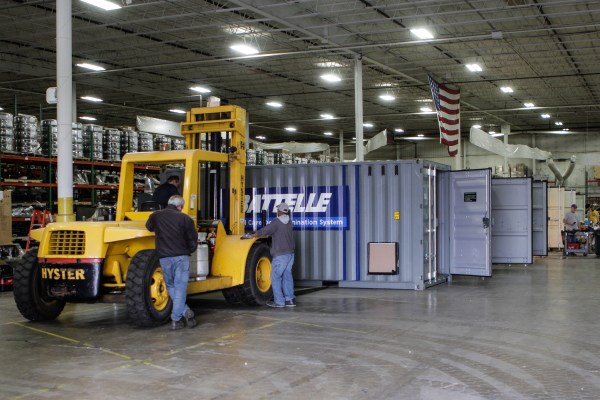 We are hearing so much in the news about shortages of personal protective equipment, or PPE, for healthcare workers. Factories are being asked to perform the impossible when it comes to production be the need is so real, so immediate, and so widespread.

The problem with rapid consumption of PPE is that once it has been exposed to infection, it’s contaminated and can’t be used again. Physically it may be fine, but it retains the capability to infect other people. If there were some way it could be effectively cleaned and decontaminated for re-use, it would reduce the strain on the supply chain and result in a greater availability of PPE for all those who require it.

This is the promise of Battelle’s Critical Care Decontamination System, a shipping-container-sized unit which has received approval from the FDA at break-neck speed.

END_OF_DOCUMENT_TOKEN_TO_BE_REPLACED 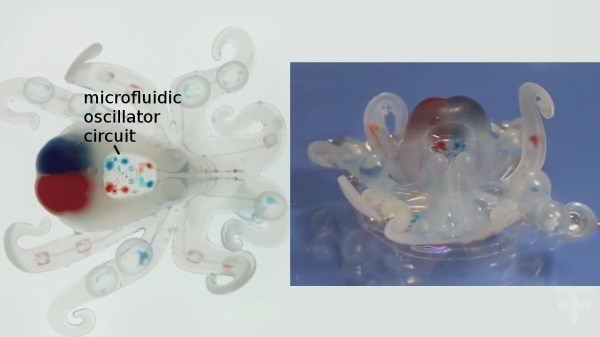 END_OF_DOCUMENT_TOKEN_TO_BE_REPLACED

Hydrogen peroxide – the same stuff you can pick up from a drug store or beauty supply store – is one of those very interesting chemicals that belongs on every maker’s cabinet. At concentrations of about 30%, it’s perfect for etching PCB boards, and at even higher concentrations – about 70% – it can be used as rocket fuel. Unfortunately for the home hacker, it’s very difficult and expensive to obtain peroxide in concentrations above 3% or so. That’s alright with [Charlie], though, because he’s come up with a way to concentrate peroxide and measure the concentration once he’s done.

There are a few YouTube videos of kitchen chemists concentrating peroxide by heating it on a stove to just under 100°C. Because hydrogen peroxide boils at 150°C, they’re simply boiling off the water and increasing the concentration of peroxide. This is a qualitative method, and you’ll never know what concentration you’re getting. [Charlie] rigged up a small-scale with a pipette to measure the weight of his concentrated peroxide per unit of volume, giving him the density of his concoction and thus the concentration.

We have to note that concentrated peroxide is dangerous stuff, but the results of [Charlie]’s lab work aren’t much more dangerous than what hair stylists work with every day. If you’re going for high-test peroxide, good job, that’s awesome, but do be aware of the risks.