I’m utterly exhausted and still in a state of awe. The Hackaday Superconference has grown in so many ways, but one thing remains the same: the spirit of the Hacker Village — an intangible feeling that grows up around all who attend — is bliss to take part in.

There’s really no substitute for having been there in person. I’ll go into detail below and try to share the experience as best I can. But the gist of the atmosphere is this: everyone at Supercon is the type of person you’d want to be stuck in a rowboat with, or partnered with on an engineering project, or to have next to you while trying to save the world. There are no looky-loos at Supercon. It turns out we are all stuck in a rowboat together, we are all working on engineering projects, and we are all trying to save the world. And when we all get together it feels like a drug our pragmatic minds never knew existed. This is the recharge for that sense of urgency that keeps you going all year long.

So yes, you really missed it. But start now. Become friends with all of these people over the next year. Begin building your Supercon community now and it’ll feel like a reunion when it rolls around again next November.

Last weekend marked the third time for the Hackaday Superconference. We hosted it in Pasadena again this year, and added a day! The festivities were supposed to begin at noon on Friday — but by 10:30 AM we already had people on site wanting to pick up a badge and get the hacking started. By the time noon rolled around all the tables were full and we were spilling over to all other parts of Supplyframe headquarters which played host.

I saw all kinds of hacks starting out. [Rich Cameron] (aka [Whosawhatsis]) took the conference logo image file from the badge and overlaid his name in red and quickly had a lineup of people who wanted the same. My nose started warning me that something was getting really hot… the “secret” easter eggs obsfucated by the AA battery holders didn’t take long to uncover and I saw badges converted to capacitive charging and others swapping alkaline batteries for a Lithium-Ion system.

The badge hacking never stopped. A huge swath of the more than 360 total conference attendees did show up to party the night away with delicious catering and an open bar (Supplyframe throws a great party!) yet those irons never went cold. We ended up having to kick people out (around 90 minutes later than expected) and I know a big group of the stragglers headed across the street to carry on at a local bar.

Saturday’s Reunion Plus Mind Expansion (and a Huge Party)

By the time check-in rolled around on Saturday morning there was a healthy line waiting to get in the door. We weren’t quite ready with the venue yet so we took the check-in line to the people, scanning tickets and distributing badges. This meant when we did open the doors it was a rather straight shot out to the breakfast awaiting everyone. Perhaps my favorite addition to the planning this year was an on-site barista. I just wish my friend Dan hadn’t waited until Sunday to tell me about the secret nitro cold brew — yum!

Before long the outdoor area was packed full of people. Of course the badge hacking seats were all claimed, but this congregation was all about catching up with old friends and getting to know the new ones. Getting people to give up their socializing to start the talks off was a hard sell but eventually we did all pile into the talk venues. 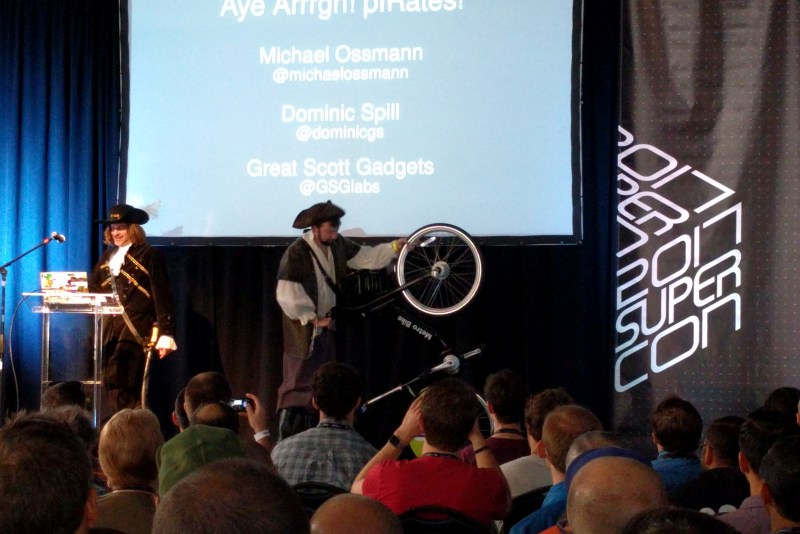 The talks themselves are a huge inspiration generator. With two talks running all day Saturday and Sunday we were able to have 33 different presentations on a wide range of topics. I absolutely loved the way Mike Ossmann and Dominic Spill committed to their talk on IR signal hacking by not only bringing in props like a traffic signal and a bicycle, but turned it up to 11 by dressing as pirates before taking the stage. Christine Sunu gave a wonderful talk on the emotional tricks you can (and should) leverage when building robots and designing human-machine interactions. I could rattle on about the talks all day but watch Hackaday for recaps of the talks as we publish the rest of the videos. 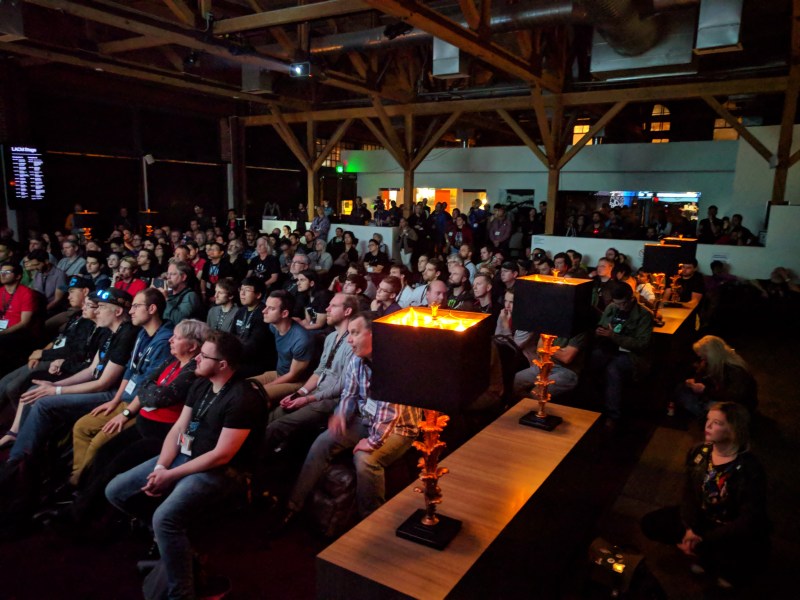 You could hear a pin drop as a standing room only crowd hung on every word of Syd Mead’s keynote. In fact, the image above doesn’t do justice to the hordes of hackers who were piled into the room to hear the Visual Futurist speak. When you think of the future, the images in your mind come directly from Syd Mead’s foundational work from movies like Tron and Bladerunner, to his work in automotive and architectural designs.

The Hackaday Prize Ceremony started immediately after this. There was electricity in the room as we recapped the top 10 finalists, and invited Hackaday Prize judges up on stage to help reveal Grand Prize, Best Product, and 2nd-5th place this year. It was a truly inspiring group of top finalists. We were delighted that three of the winners were at the Supercon with us and able to accept their award in person.

The party that followed was by far our best ever. Miss Jackalope played a set in the Design Lab which had been filled with 6-player foosball, skeeball, pinball, classic coin-op (Galaga and Ms Pacman, of course). What was left of the floorspace was quickly taken over for dancing. And around the corner in the front Rich Hogben had his mixed-reality shooting gallery set up.

We hired a taco truck to provide dinner. LA is well known for its fierce taco truck competition and the food was excellent. Our friend [X] backed his van into the alley and we added CAN bus hacking to our list of activities. Badge hacking was of course still completely packed, and [Will Caruana] broke out the transformer he brought for his Lichtenberg workshop to run just about everything through a high voltage ‘stress test’. The crowd that formed around this was huge, and as I walked home at half-past midnight I heard a cheer from several blocks away that had to have been Hackaday making itself known to the neighborhood.

Sunday was for Old Friends (and a Huge Party)

A second day of superb talks and workshops began and everyone flooded back into the building. However, this certainly was the day that “Hallway-con” took shape. It seemed anytime you wanted to move from one space to the next it was an act of negotiating through spontaneous conversations that were popping up everywhere. And more likely than not you got pulled into one of those fantastic discussions.

The culmination of this final day of the Hackaday Superconference was the badge hacking ceremony. We lined up prizes for people who solved the puzzles (both on the badge and around the con), the Best Film recorded using the badge’s digital camera, and the best hardware and software hacks. We’ll be running a dedicated article on all of these hacks so keep your eye open for that.

Despite three days of enjoyment, nobody wanted to leave. A group that had partied late into Friday and Saturday evening, and ran their brains on turbo during the day with hands-on hacking and new learning just couldn’t get enough. We had suggested a bar across the street for the after party and people turned out in force. When I got there the patio was full. What I didn’t realize was that half of the inside space was Supercon folks as well.

This wasn’t our first Supercon, but it was our best and that has become tradition. The people who come to the Hackaday Superconference really do represent an inclusive community whose membership requires you to have fun, have an open mind, and a strong instinct to learn and to try new things. This is a community that is calling you, and I can’t wait to see you next year. Viva la Supercon!

9 thoughts on “The Hacker Village Of Supercon”