Today we’re used to handheld game consoles like the Nintendo Switch, that let you roam around in 3D worlds which include not only 3D players but more terrain than many people walk around in real life in a week. But back in the early 1980s Nintendo’s handheld offering was the Game & Watch, which used a segmented LCD display. An entire segment could be used to represent the player, with player segments spread throughout the display. To move the player, the previous player segment would be turned off while another adjacent one would be on. That also meant that a console could play only one game. Despite these limitations they were very popular for their time.

[Thomas Tilley] decided to improve on the old Game & Watch in a different way, by making it bigger, much bigger. So big in fact that even many teenage players can’t reach both the button to move left and the button to move right in time, turning it into a highly co-operative two-player game. Judging by the video below, that made playing it double the fun. The game he chose to tackle is the Game & Watch Octopus, or Mysteries of the Sea and Mysteries of the Deep in the UK.

END_OF_DOCUMENT_TOKEN_TO_BE_REPLACED 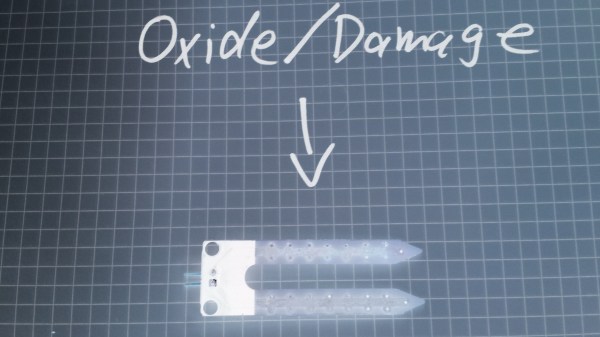 If you compulsively search online for inexpensive microcontroller add-ons, you will see soil moisture measurement kits. [aka] built a greenhouse with a host of hacked hardware including lights and automatic watering. What caught our attention among all these was Step 5 in their instructions where [aka] explains why the cheap soil sensing probes aren’t worth their weight in potting soil. Even worse, they may leave vacationers with a mistaken sense of security over their unattended plants.

The sensing stakes, which come with a small amplifier, work splendidly out of the box, but if you recall, passing current through electrodes via moisture is the recipe for electrolysis and that has a pretty profound effect on metal. [Aka] shows us the effects of electrolysis on these probes and mentions that damaged probes will cease to give useful information which could lead to overworked pumps and flooded helpless plants.

There is an easy solution. Graphite probes are inexpensive to make yourself. Simply harvest them from pencils or buy woodless pencils from the art store. Add some wires and hold them with shrink tube, and you have probes which won’t fail you or your plants.

Here’s some garden automation if this only whet your whistle, and here’s a robotic friend who takes care of the weeds for you. 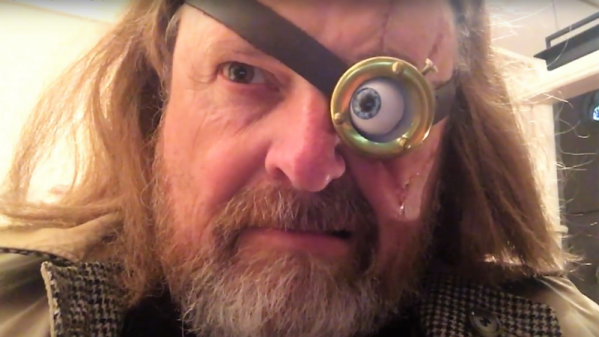 Even when you bear a passing resemblance to the paranoid Auror of the Harry Potter universe, you still really need that wonky and wandering prosthetic eye to really sell that Mad-Eye Moody cosplay, and this one is pretty impressive.

Of course, there’s more to the [daronjay]’s prosthetic peeper than an eBay doll’s eye. There’s the micro-servo that swivels the orb, as well as a Trinket to send the PWM signal and a pocket full of batteries. The fit and finish really tie it together, though, especially considering that it’s made from, well, garbage — a metal food jar lid, a yogurt cup, and the tube of a roll-on antiperspirant. Some brass screws and a leather strap evoke the necessary Potter-verse look, and coupled with what we assume are prosthetic scars, [daronjay] really brings the character to life. We think it would be cool to have the servo eye somehow slaved to the movements of the real eye, with a little randomness thrown in to make it look good.

END_OF_DOCUMENT_TOKEN_TO_BE_REPLACED 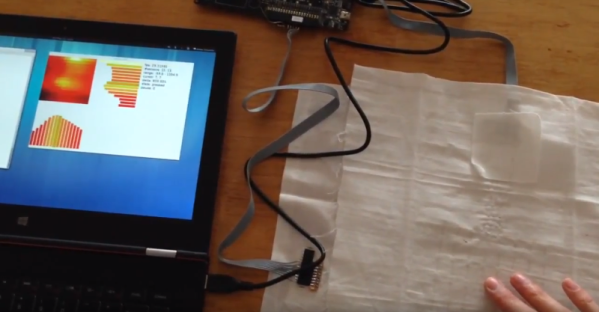 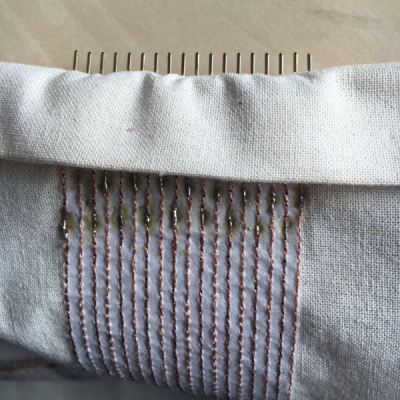 Thanks for the tip, [Melissa]!

[Marko] styles himself as a crazy chemist. His video showing a fast tin plating solution for PCBs (YouTube, see below) doesn’t seem so crazy. We will admit, though, it uses some things that you might have to search for.

The formula calls for stannous chloride — you could probably make this by dissolving tin in hydrochloric acid. There’s also thiourea — the main chemical in silver-cleaning dips like Tarn-X. Sulphuric acid and deionized water round out the recipe.

END_OF_DOCUMENT_TOKEN_TO_BE_REPLACED

Some sounds are capable of evoking instant terror. It might be the shriek of a mountain lion, or a sudden clap of thunder. Whatever your trigger sound, it instantly stimulates something deep in the lizard brain that says: get ready, danger is at hand.

For my part, you can’t get much scarier than the instantly recognizable two-tone alert signal (audio link warning) from the Emergency Broadcast System (EBS). For anyone who grew up watching TV in the 60s and 70s in the US, it was something you heard on at least a weekly basis, with that awful tone followed by a grave announcement that “the broadcasters of your area, in voluntary cooperation with the FCC and other authorities, have developed this system to keep you informed in the event of an emergency.” It was a constant reminder that white-hot death could rain from the sky at any moment, and the idea that the last thing you may ever hear was that tone was sickening.

While I no longer have a five-year-old’s response to that sound, it’s still a powerful reminder of a scary time. And the fact that it’s still in use today, at least partially, seems like a good reason to look at the EBS in a little more depth, and find out the story behind the soundtrack of the end of the world.

END_OF_DOCUMENT_TOKEN_TO_BE_REPLACED 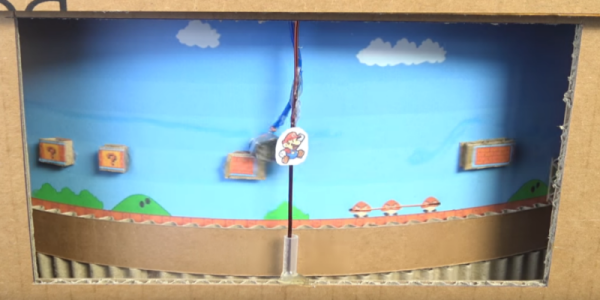 Browsing around the depths of the Internet we came across a super low tech version of Super Mario from [Sata Productions]. The video presents a complete tutorial on how to make a playable, cardboard version of the famous Super Mario game. If you are a fan, you probably going to like this.

You basically need cardboard, a hot glue gun, a ball bearing, a couple of DC motors, some iron BBs, some magnets, batteries, some wires… it sounds just like shopping list for a MacGuyver episode. But it works and it’s playable. It has a wired remote control, you control Mario to move and make him jump up and down in a kind of turning dashboard game. It even has a game over screen when Mario dies. Yes, Mario can die in this cardboard version. If you want to make a custom version you can always print a bigger level and resize the cardboard box.

Super Mario has had its shares of hacks, like this interface hack using a Kinect to control Mario or this super tricky jailbreak hack that allows players to run their own game mods, but this one is just on another level: a low tech approach. It seems like it could be a fun weekend project, especially if you have kids. If you’re not into Super Mario, it’s possible to just print a different game, the supporting platform is pretty generic and could support several simplified platform games.

Check out the video: