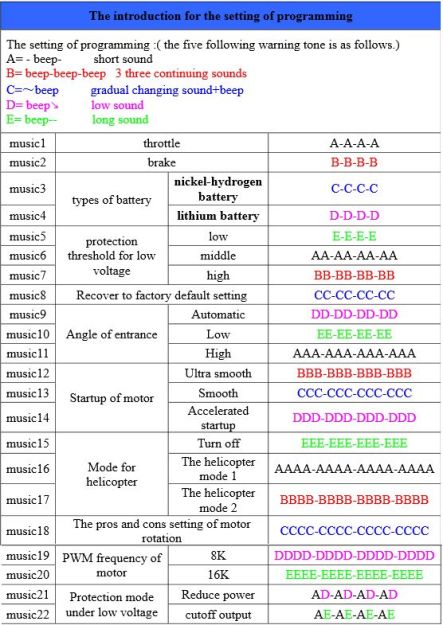 The RC hobby is rife with bad hardware and software. It hails from an era that valued cheapness over openness, with little in the way of standards. Every manufacturer has their own way of doing things.

Like a lot of expensive hobbies, manufacturers have placed no value in openness or customization in RC — maybe complexity was an asset, giving participants a sense of eliteness when they conquer the interface. Basically everyone who couldn’t program their VCR without a manual was excluded from participating in RC.

Let me illustrate the suckiness of commodity RC gear in a nutshell: beep menus. These are multi-level menu systems that use sound as the only feedback mechanism and are almost universally loathed.

A lot of RC gear is difficult to work with because it hails from an era when people really didn’t use computers (let alone mobile devices) to interface with and modify their RC components. Lower-end RC — the cheap stuff — presupposes no computer at all. “Beep” menus are the reality of working with “headless” components like Electronic Speed Controllers (ESCs).

When you go into configuration mode, it starts listing off the menu options, one at a time, with different tones or quantity of beeps signifying different options. You use your control sticks to navigate the menus. It’s imperative that you pay close attention so as not to jump into the wrong menu and start reconfiguring something you’ve already finely tuned.

Beep menus can be navigated through special hardware programming rigs, where LEDs signify the various menu options. There are also software packages that do the same thing, though some on the lower end have really sketchy PC-only applications. Who wants to run an .EXE they downloaded off some mystery website? Not I. And you’re not solving the problem, just enlisting a machine to deal with it on your behalf without any hint of added functionality.

Most RC manufacturers do not want you to hack or modify their equipment in any way, aside from navigating menus. In all fairness, most commodity electronics work the same way. Do you demand to hack the firmware of your toaster? But the key difference between drones and toasters is that there is a huge base of hackers looking to play with RC hardware. Can anything be bigger than drones right now? 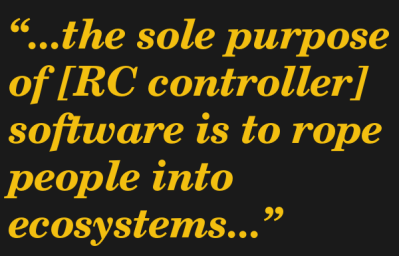 It seems like for commodity RC equipment, the sole purpose of software is to rope people into ecosystems. Permitted modifications are along the lines of reconfiguring sticks based on which one you want for throttle, ailerons, rudder, and elevator. To make matters worse, commodity controllers are designed for specific formats — the quad, the rover, the helicopter, the plane. If you change your format, you have to make modifications to your hardware as well. For instance, the throttle stick doesn’t auto-center the way the rudder/aileron controller does, and some have ratchets to help keep them in place. If you wanted to use that stick for something else you have to disassemble the case and hope the stick can be modified.

All of this is predicated on a plane-centric configuration, but what if you have some sort of project that doesn’t resemble that sort of thing? Forget quadcopters and fixed-wing planes. You should be able to control anything with a RC controller. 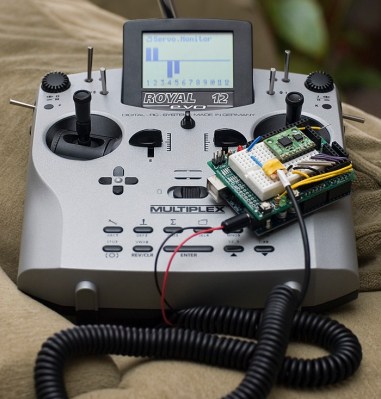 Needless to say, hackers have embraced the challenge of taking these controllers and making them work better. At its simplest level, a transmitter is just some control sticks, switches, and buttons hooked up to a microcontroller and transmitter. Maybe there’s an LCD. When dealing with mystery chips, often it makes more sense to replace just the motherboard and not the hardware. We’re not talking about robust processing power for the most part. Even something as basic as an Arduino UNO has a lot of capability.

There are a lot of RC-control Arduino projects floating around, for instance.  [Ryan Boland] used an oscilloscope to figure out how his transmitter and receiver worked, basing his project on the RC Arduino folks writeup on using an UNO to interpret RC receiver signals. If your microcontroller can listen to analog and digital pins and control ESCs, it can run a drone.

The Hard Work is Already Done

That said, the more commonplace models of transmitter are the ones more likely to be hacked. Having an existing knowledge base of pin diagrams and forum discussions makes everything easier. And there are some fun projects out there. 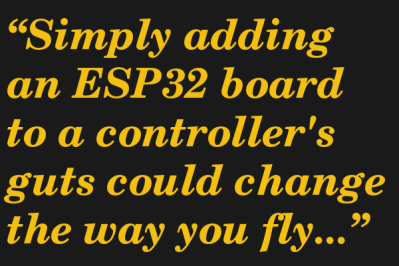 [Cyberman] radically modified his HK-T6A with fine-tuned controls and OLED supported. On the Turnigy side, their 9X controller is one of the most popular, featuring an LCD display and 9 channels. [dave1993] is building his own version of the 9X in a project he calls core9x.

Simply adding an ESP32 board to a controller’s guts could change the way you fly right away. Another useful project is the DIY multiprotocol TX module, which aims to allow transmitters to interact with receivers of different brands, rather than being stuck in the transmitter manufacturer’s ecosystem.

However, not everyone wants to go to all that trouble. It turns out there’s an even easier way: reflash the firmware! A lot of limitations placed on radios are software driven. For instance, a 3-channel radio could have the same processor and RF module as a 9-channel radio.

A lot of medium-plus quality radios have fairly robust chips, meaning that it makes more sense to reflash the microcontroller’s firmware while it’s still in the case. OpenTX is such a project, with firmware created for ARM-based transmitters, including the popular Turnigy 9x. It even has been chosen by FrSky to be the new operating system of their $200 Taranis 9x radio, proving that open source can work with industry.

OpenLRS is another open source firmware project, focusing on OrangeRX and Hawkeye transmitters.  Meanwhile, DeviationTX focuses on Walkera Devo radios. Another cool project seeks to reflash the FlySky’s M0+ chip — my favorite part of these projects is where the participants laboriously map all the microcontroller’s pins — 64 on the M0+’s Freescale MKL16Z64VLH4.

Reflashing makes it possible to switch RF modules on the radio, change the number and purpose of channels, and all those other things that help regular folks control one configuration of drone but that hackers find terribly limiting.

Let’s get back to the central question. Can RC controllers remain relevant? 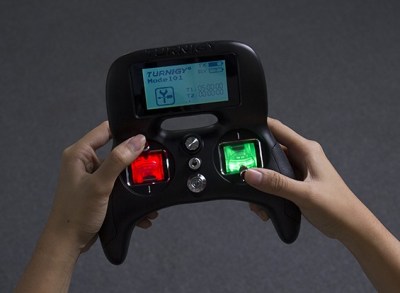 It’s possible that old school transmitters are just a little stodgy. Skill with the sticks has taken a backseat to flight-controller-driven flight (drone racing excluded) and as components continue to shrink, some of the larger boxes begin to resemble an old school remote control where the quality is based on how many buttons it has, not the utility of the interface.

Laptops and mobile devices have expanded their role in drone control, highlighting the fact that video is playing an increasing role in the business. In response, Turnigy created the game controller-style radio like a Turnigy Evolution (seen to the right). It has a big screen, it’s light and handy, and it’s perfect for FPV. It has few of the buttons and switches associated with landing gear and lights and so forth, relying on a touch screen for those features. It has a five-model memory, allowing you to switch between models. It has a USB port so it can control flight simulators and charge its batteries. It’s only $40 on Hobby King, making it a tempting purchase.

That said, the Evolution packs the usual factory firmware and remains closed. As nifty as the Evolution might be for that price point, it still won’t be able to reach its full potential as long as it’s locked up. If only these radio manufacturers take a hint from so many companies that have to come to embrace open source hardware and software! Lend your voice to this, let us know the important ways open source controller firmware could change the way we fly by leaving a comment below.