The bouyancy engine Alex speaks about is located in the nose of the glider. He was clever to choose medical syringes as an off-the-shelf option for moving water in and out of the glider to affect boyancy. They’re cheaply and readily available, and designed for moving liquids in exactly the way needed for the project. Alex collects six of them together and moves the plungers in union with a single machine screw at the center. After comparing tests between this and a peristaltic pump design he found that the syringe design operates more efficiently and to us it appears to be much less complicated to build.

This platform is designed to be used for autonomous tasks like data acquisition over large areas in the ocean. Since it doesn’t use active locomotion it can do its job unattended for days at a time. Two fixed fins on the glider convert downward motion to forward lateral motion when the nose of the glider is filled with or purged of water.

The current revision of the design is complete, and Alex is now looking for an opportunity to do some proper open water testing to figure out the limits and capabilities of the system. This will answer some questions like how the bouyancy system will hold up to the pressure, how much more efficiency can be gained by deeper dives, and how well a balance shifting system will work for turning the vessel.

The Origin Story of Alex Williams 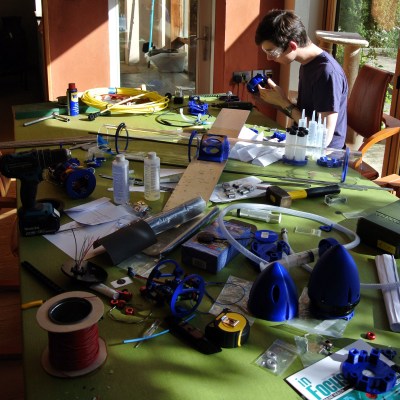 Alex shared some of his background during his interview and hearing about his path is absolutely fascinating. When he started working on the Open Source Underwater Glider he was doing his A-levels (in the UK this is the final year of education before college). His fabrication skills are self-taught, and he cites LEGO as his entry into engineering. He’s been doing 3D modeling for years. Alex got started in modelling with Blender, honed his skill on SolidWorks, and most recently transitioned to using Onshape.

Alex has been studying engineering at college this year but the coursework was mostly theoretical. Having thrown so much of himself into this project has shown him that he needs an engineering school that puts emphasis on practical study (in other words: building stuff). If you know the perfect program, please get in touch with Alex. We think any college would be lucky to have him in the student body.

The most amazing part of this project is the level of openness and documentation Alex has achieved. He has a plan to test and improve upon the current design. The $50,000 grand prize will certainly help open some doors, but ultimately he needs to take the prototype out for open water testing and there the level of complexity will grow very rapidly.

The most successful open source and open hardware projects don’t hinge on one person, but leverage the excitement, experience, and support of teams of people. We’ve already seen folks with vast experience in this realm lending their support in the comments of Alex’s project page. If you are interested in this project, reach out to Alex and let him know. Let’s build up a community for this project and continue the work to Build Something that Matters.

10 thoughts on “An Interview With Alex Williams, Grand Prize Winner”