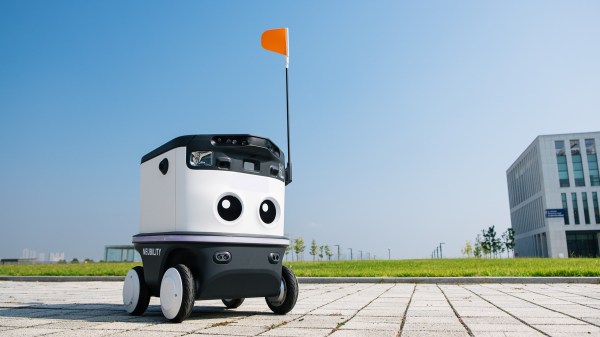 While online shopping was already very popular in South Korea, it has become even more so as people stay home more during the pandemic. Several robotic delivery services have launched around the city, such as 7-Eleven using the Neubie robot by Neubility, the GS25 convenience store using LG’s CLOi ServeBot, and the Baemin food delivery service using the Delidrive robot. 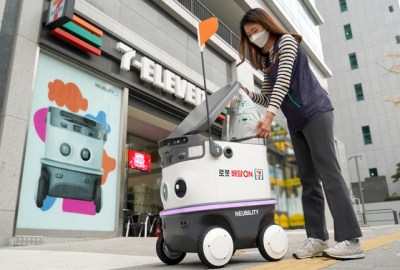 Love it or hate it, in the dense population of big cities like Seoul the vast majority of people live in apartment complexes. This lends itself well to these robot delivery projects. In fact, many of these pilot projects are only available in one apartment complex, which can consist of ten to twenty 15+ story buildings. Training your robot to navigate the sidewalks, operating the doors, calling the elevators, and buzzing the customer’s home intercom is an easier task when dealing with only one campus.

Some projects are more ambitious, like another Neubility system operating on the Yonsei University Songdo City campus. You can order fried chicken and have it delivered by a Neubie robot, which comes to your address along the sidewalk at a brisk 5 to 6 km/h. There are some issues, however. First of all, government regulations haven’t quite kept up with the technology. These services are basically operating case-by-case, temporary waiver basis. They are not allowed to operate on the streets, and when driving on the sidewalks they have to avoid bumping into people.

We wrote about a prototype RC truck delivery system last year, and covered Amazon drones and Automating Freight Delivery as well. These all show promise, but are not mainstream yet. The vast majority of your orders are still delivered by a person. Will these automated delivery services eventually replace humans? Let us know your thoughts in the comments below.

The availability of cheap and powerful RC motors and electronics has made it possible for almost anyone to build an RC flying machine. Software is usually the bigger challenge, which has led to the development of open-source packages like BetaFlight and Ardupilot. These packages are very powerful, but not easy to modify if you have unconventional requirements. [Nicholas Rehm] faced this challenge while doing his master’s degree, so he created dRehmFlight, a customizable flight controller for VTOL aircraft. Overview video after the break.

[Nicholas] has been building unique VTOL aircraft for close to a decade, and he specifically wanted flight stabilization software that is easy to modify and experiment with. Looking at the dRehmFlight code, we think he was successful. The main flight controller package is a single file of fewer than 1600 lines. It’s well commented and easy to figure out, even for an inexperienced programmer. A detailed PDF manual is also available, with full descriptions for all the functions and important variables, and a couple of tutorials to get you started. Libraries for interfacing with accelerometers and RC gear is also included. It runs on a 600 Mhz Teensy 4.0, and all the programming can be done from the Arduino IDE.

[Nicholas] has repeatedly demonstrated the capabilities of dRehmFlight with several unique aircraft, like the belly flopping RC Starship we covered a while ago, a VTOL quad rotor biplane, VTOL F35, and the cyclocopter seen in the header image. dRehmFlight might not have the racing drone performance of BetaFlight, or advanced autopilot features of Ardupilot, but it’s perfect for getting unconventional aircraft off the ground. END_OF_DOCUMENT_TOKEN_TO_BE_REPLACED 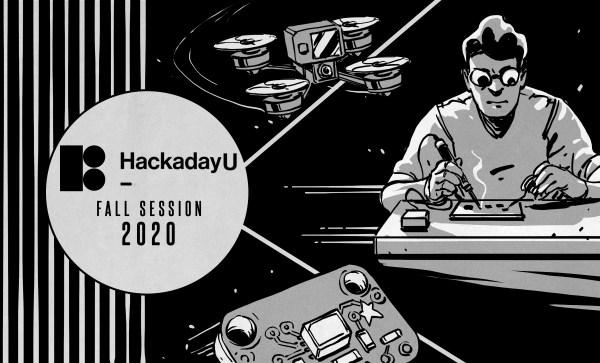 The fall lineup of HackadayU courses was just announced, get your tickets now!

Each course is led by expert instructors who have refined their topics into a set of four live, interactive classes plus one Q&A session we like to call Office Hours. Topics range from leveling up your Linux skills and learning about serial buses to building interactive art and getting into first-person view (FPV) drone flight.

Checkout the course titles, instructors, and details listed below. If you’d like to hear about each class from the instructors themselves, their teaser videos are embedded after the break.

HackadayU courses are “pay-as-you-wish”. To help ensure the live seats don’t go to waste, the minimum donation for each class is $1. Proceeds go to charity and we’re happy to report a donation of $4,200 going to Steam Coders from the summer session of HackadayU. A new charity will be chosen for the fall classes, details to follow.

Each class will be recorded and made available once they’ve been edited. You can take a look at the excellent Reverse Engineering with Ghidra series right now. Videos of the Quantum Computing and KiCad + FreeCAD courses are coming soon.

END_OF_DOCUMENT_TOKEN_TO_BE_REPLACED 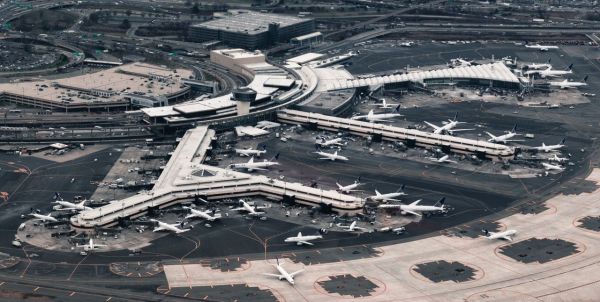 Yesterday Alphabet (formerly known as Google) announced that their Wing project is launching delivery services per drone in Finland, specifically in a part of Helsinki. This comes more than a month after starting a similar pilot program in North Canberra, Australia. The drone design Wing has opted for consists not of the traditional quadcopter design, but a hybrid plane/helicopter design, with two big propellers for forward motion, along with a dozen small propellers on the top of the dual body design, presumably to give it maximum range while still allowing the craft to hover.

With a weight of 5 kg and a wingspan of about a meter, Wing’s drones are capable of lifting and carrying a payload of about 1.5 kg. This puts it into a category of drones far beyond of what hobbyists tend to fly on a regular basis, and worse, it involves Beyond Visual Line Of Sight (BVLOS for short) flying, which is frowned upon by the FAA and similar regulatory bodies. What Google/Alphabet figures that can enable them to make this kind of service a commercial reality is called Unmanned aircraft system Traffic Management (UTM).

UTM is essentially complementary to the existing air traffic control systems, allowing drones to integrate into these flows of manned airplanes without endangering either. Over the past years, it’s been part of NASA’s duty to develop the systems and infrastructure that would be required to make UTM a reality. Working together with the FAA and companies such as Amazon and Alphabet, the hope is that before long it’ll be as normal to send a drone into the skies for deliveries and more as it is today to have passenger and cargo planes with human pilots take to the skies.

END_OF_DOCUMENT_TOKEN_TO_BE_REPLACED 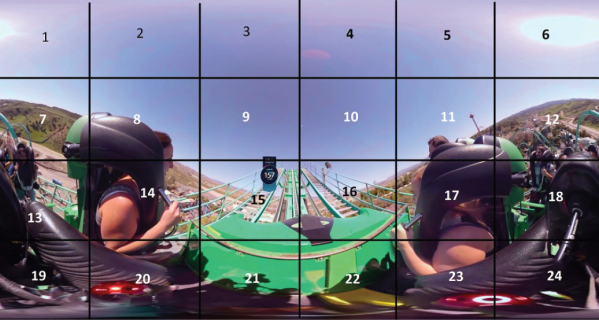 END_OF_DOCUMENT_TOKEN_TO_BE_REPLACED

MIDI, the Musical Instrument Digital Interface, was released in 1983 in a truly bizarre association between musical instrument manufacturers. At no other time, before or since, has there been such cooperation between different manufacturers to define a standard. Since then, the MIDI spec has been expanded with SysEx messages, the ability to dump samples via MIDI, redefining the tuning of instruments via MIDI to support non-Western music, and somewhere deep in the spec, karaoke machines.

Now there’s a new update to the MIDI spec (Gearnews link, here’s the official midi.org announcement but their website requires registration and is a hot garbage fire). At this year’s NAMM, the place where MIDI was first demonstrated decades ago,  the MIDI Manufacturers Association announced an update to MIDI that makes instruments and controllers smarter, and almost self-learning.

There are three new bits to the new update to the MIDI spec. The first is Profile Configuration, a way to auto-configure complex controller mappings, described as, ‘MIDI Learn on steroids’. The second update is Property Exchange, and allows MIDI devices to set device properties like, ‘product name, configuration settings, controller names, and patch data’. This is effectively setting metadata in controllers and devices. The third new bit is Protocol Negotiation, a way to automatically push future, next-gen protocols over a DIN-5 connector.

What does this all mean? Drones. No, I’m serious. The MIDI association is tinkering around with some Tiny Whoops and Phantoms, and posted a video of drones being controlled by a MIDI controller. Play a glissando up, and the drone goes up. You can check out a video of that below.