I was in Pasadena CA for the Hackaday Superconference, and got to spend some quality time at the Supplyframe Design Lab. Resident Engineer Dan Hienzsch said I could have a few hours, and asked me what I wanted to make. The constraints were that it had to be small enough to fit into checked luggage, but had to be cool enough to warrant taking up Dan’s time, with bonus points for me learning some new skills. I have a decent wood shop at home, and while my 3D printer farm isn’t as pro as the Design Lab’s, I know the ropes. This left one obvious choice: something Jolly Wrencher on the industrial Tormach three-axis CNC metal mill. 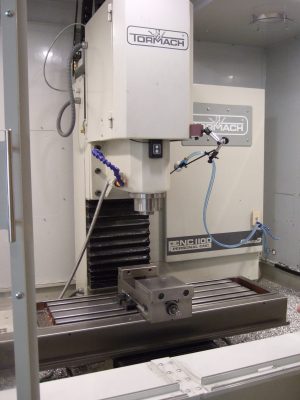 A CNC mill is an awesome tool, but it’s not an omniscient metal-eating robot that you can just hand a design file to. If you thought that having a CNC mill would turn you into a no-experience-needed metal-cutting monster, you’d be sorely mistaken.

Of course the machine is able to cut arbitrary shapes with a precision that would be extremely demanding if done by hand, but the craft of the operator is no less a factor than with a manual mill in making sure that things don’t go sideways. Dan’s good judgment, experience, and input was needed every step of the way. Honestly, I was surprised by how similar the whole procedure was to manual milling. So if you want to know what it’s like to sit on the shoulder of a serious CNC mill operator, read on!

I said “Dan, Jolly Wrencher in Aluminum!” and when I came in the next morning, he had already been secretly working behind my back. The SVG file that he had of the Wrencher was actually composed of tiny line segments rather than smooth Bezier curves. Attempting to match all of the resulting infinitesimal sharp corners would drive the CAD software (Fusion 360) batty. So instead, Dan traced over the original image with entirely new, smooth curves and came up with something indistinguishable from the original to my eye, but much easier for the computer to handle.

With the desired outline set, we had to pick our tooling. Here, there is a trade-off between being true to the input file and getting the piece made in a short time. If Dan chose too large a cutting head on the mill, the fine details would be impossible to cut out — in particular the points of the wrenches have interior corners, and the sharpness of these is limited by the bit’s diameter. Doing the whole piece with the finest head would look better, but it would take forever. Thus the usual strategy is to make a rough pass to hog out the bulk of the aluminum, and then make finer passes with the smaller tool. But how big is big, and how small is small? And are two passes enough, or should we go to three? 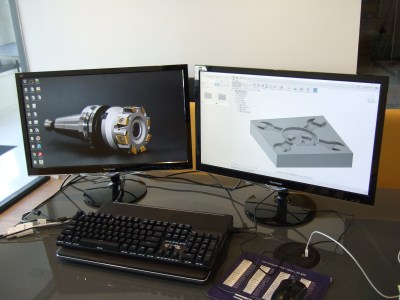 n the end, this is a judgement call. Switching out the toolheads is very quick on the Tormach, but it doesn’t do it automatically. That meant that we had to be around at just the right time to swap them out. In that sense, fewer tool changes are better than more. Dan picked the first-stage mill to just fit between the Wrencher’s eyes and the edge of the skull, but didn’t sweat the small details in the tips of the wrenches. A second pass with a finer tool would handle them. A final pass with a chamfering bit was added just for show: because I like the look of curving chamfered edges, and could never do this so nicely by hand.

The CAM software also wanted to know an overwhelming number of details about the actual cutting, but most of these had good previous values due to Dan’s experience cutting aluminum with these particular toolheads. Still, he cavalierly set the feed rate about double what it probably should be, and said we’d be “riding the jog wheel” to get it right.

Even before we’d flipped the machine’s big red on switch, Dan had already made a number of judgement calls that depend on his knowledge of the software, the machine, the tools, and the material that we’re cutting. A newbie, like myself, would have already lost the game, CNC be damned.

We uploaded the CAM files and started up the Tormach’s warm-up and self-lubrication procedures. Dan made sure that it was sending out a fine mist of cutting fluid, and then we started looking for scrap aluminum bar. The skull was planned to be about 4″ (call it 10 cm) square, and the shop had some slightly larger bar stock that just needed cutting. Good lubrication and a clean and sharp metal blade on the chop saw made quick work of a hefty bar of aluminum, but this was essentially just like you’d do it at home with some cutting fluid and a hack saw. Only faster.

Bar stock isn’t necessarily square, and the surfaces don’t look good anyway, so once the mill had warmed up, Dan put in the fly cutter head and we trued up the stock. Though he was using the CNC mill to make the cuts, this was an almost entirely manual procedure. First, he cut a reference edge by going progressively deeper until he took off all the original metal. Then he flipped it around and repeated the procedure. With two parallel edges, and good precision square blocks, he cut the remaining faces to be square. In all cases, it was a process of lowering the fly cutter slowly until it just hit the (guestimated) high point on the face, and working down pass by pass until everything is shiny. How much to take off? How fast to feed? Operator experience. CNC doesn’t help you here.

In the end, our block measured 4.001″ by 3.985″ — not bad, but a slightly wonky first cut with the chop saw resulted in us needing to take off too much on one edge to get it clean. It’s a paperweight anyway, so all that matters is getting the Wrencher centered. Enter operator experience again. Dan had set up the CAM file with the machine’s zero point in the dead center of the Wrencher’s head. This means that as long as we could point the CNC machine to the center of our aluminum stock, we wouldn’t have to worry about that nagging 0.015″ (0.4 mm) that one side is shorter than the other — everything will work out symmetric by design.

The Tormach has a 3D distance probe tip, which is probably the coolest thing I’ve seen. You chuck it in the machine and it measures in the X, Y, and Z axes. This made finding the exact width and height of the piece in all dimensions a piece of cake, and allowed Dan to tell the machine where the top surface of the center of our piece was. Up until this point, everything was 100% manual, but now that the machine is oriented, the CNC can help out. 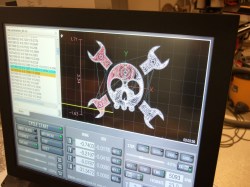 Swapping in the first cutting tool, did he just press play? Well, kinda. The Tormach has individual speed controls for cutting speed and travel speed. The first order of business was to double-check our zero setting by moving the mill down to the work piece at about 10% travel speed and with the cutting feed speed set to 0%. This let us verify that the mill stopped exactly where it should. If he had made a mistake, it could have run the mill into the metal at a dangerous depth or an insane feed speed, breaking bits or worse. Sanity checks like this are key.

He then raised up the cutting feed speed slowly; remember that he had set the feed speed too high intentionally during the CAM stage. We watched the mill spiral down to the correct cutting depth, and then start off on its pattern. He slowly cranked up the feed until it was moving at a decent pace. How much material should it take off per second? Just like with a manual mill, it’s a matter of experience. He listened to the machine, watched the chips flying off, and checked the quality of the cut throughout. Fully automatic CNC? The opposite.

The roughing pass was done in a jiffy, and we changed out the tool for the detail mill. Again, we repeated the same procedure of slowly edging the tool down to the surface of the aluminum. Did it stop where it was supposed to? Is the toolhead the length that the machine thinks it is? Affirmative to both, but it’s a good double-check. Dan then slowly jogged the machine up to operating speed again.

Watching the mill do its work is mesmerizing, as any of you with a 3D printer know, and I ended up watching aluminum chips fly while I could have been outside drinking coffee. But these fifteen minutes of full automation were over too soon. One more tool change, to the chamfering bit, and another couple of minutes of machine time and the Jolly Paperweight was finished. The swirlies from the center of the mill’s flutes make it look almost like a sugar skull. It was glorious!

Of course, the Aluminum Wrencher was a quick-and-dirty, one-off project. If we were producing these in multiples, we would write down the ideal feed speeds and maybe skip the manual jog-wheeling for the next iterations. But all in all, fairly heavy operator involvement and judgement was involved for 60% of the time. Planning the work, squaring up the stock, and even guiding the machine through the steps that it already “knew” required an operator who is familiar with machining from a manual perspective, and who could think through the next steps while planning the present. 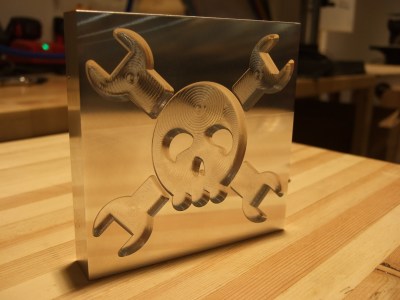 While traditional metalworkers might wake up in the middle of the night sweating bullets about the robots taking work out of their hands, and maybe that’s right in mass production, it’s certainly not the case that someone who’s never had metalworking experience can just walk up to one of these CNC wonders, hand it an image, and press play. After watching Dan and the Tormach cut me a Wrencher, I’d say that learning the ropes on a manual mill isn’t sufficient to become a master of the CNC, but it’s absolutely necessary.

But I’m just a CNC-milling noob. What do you folks say? How much of your bag-of-manual-metalworking tricks transfers over the world of CNC?

Thanks a ton to Dan and everyone at the Design Lab for your hospitality!

42 thoughts on “CNC Milling Is More Manual Than You Think”