Just how much metaphorical juice is in a coin cell battery? It turns out that this seemingly simple question is impossible to answer — at least without a lot of additional information. The problem is that the total usable energy in a battery depends on how you try to get that energy out, and that is especially true of coin cells.

For instance, ask any manufacturer of the common 3 V lithium 2032 batteries, and they’ll tell you that it’s got 230 mAh. That figure is essentially constant across brands and across individual cells, and if you pull a constant 0.2 mA from the battery, at room temperature and pressure, you’ll get a bit more than the expected 1,150 hours before it dips below the arbitrary voltage threshold of 2.0 V. Just as it says on the tin.

What if you want to do anything else with a coin cell? Run an LED for a decade? Pull all the energy out right now and attempt to start a car? We had these sorts of extreme antics in mind when we created the Coin Cell Challenge, but even if you just want to do something mundane like run a low-power radio sensor node for more than a day, you’re going to need to learn something about the way coin cells behave in the real world. And to do that, you’re going to need to get beyond the milliamp hour rating. Let’s see how deep this rabbit hole goes.

A coin cell battery is essentially a metal jar of chemistry constructed so that one side wants to give up electrons and the other side wants to take them in. You could imagine measuring the capacity by counting up the number of electrons that want to trade places before their willingness to move, measured in volts, drops below a certain threshold. It’ll be a big number, but that’s why we have the coulomb, a unit of charge equivalent to roughly 6.24 x 1018 electrons’ worth. Or you could use the ampere, a measure of flow of charge equal to one coulomb per second, and multiply by time to get back to a total charge. One amp-hour is exactly 3,600 coulombs.

And no matter which definition physicists decide is primary, a milliamp hour isn’t a bad way to think of the amount of charge in a coin cell. For a 230 mAh cell, you’re probably going to get 460 hours at half a milliamp of draw, and you are also likely to get something near 230 hours at 1 mA. But will you get ten hours at 23 mA? 0.23 hours at 1 A? The answer is “no”. Pretty soon, the milliamp hour rating gets stretched to breaking, and the reason is internal resistance.

Batteries have a reluctance to trade too many electrons too fast, reflected as a resistance. Try to pull too much current from a battery, and it obeys Ohm’s Law:

So you’ll be able to draw more total energy from a battery if you pull it out slowly, breaking the simple multiplicative milliamp-hours relationship. Not coincidentally, manufacturers tend to rate the batteries at fairly low average currents: from a fifth to a half of a milliamp.

But there are two more wrinkles in the internal resistance story before we’re through. Batteries can support short bursts of current output before the internal resistance rises. Equivalently, they can supply short bursts of current before the voltage drops to its steady state value. That means that you’ll get more total energy out of a battery if you give it some time to recoup between high current pulses. This excellent white paper (PDF), written by folks at Nordic Semiconductor and Energizer, has some great experimental data. The takeaway is to let your batteries rest for 25 ms or more between pulses if you can help it. 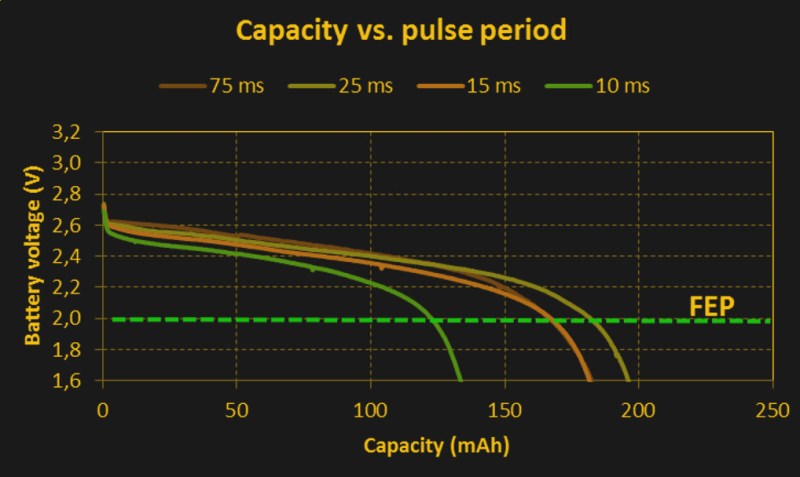 Finally, internal resistance is also a function of charge state, being lower in the beginning and increasing as the battery’s supply of mobile electrons is depleted. Toward the end of the battery’s maximum rated capacity, as this internal resistance increases, you simply might not be able to pull out the multi-milliamp peak currents that were previously feasible without the voltage sagging and potentially browning out your device. This further shortens the useable life for higher currents.

That wraps up the physics-slash-chemistry lesson. As you can see, there’s a lot involved in getting the maximum bounce per ounce out of a coin cell; the milliamp hour rating comes from one simple usage pattern that might not have anything at all to do with your application, and there are design tradeoffs aplenty. We’d bet that there are even more odd behaviors lurking around some dark corners.

The Long Run or Burning Bright

If you want to get the most out of a coin cell, you’ll go low and slow. And if that’s not a possibility, peaky current patterns with longer pauses between peaks is almost as good, but you should think about brownouts near the end of the battery’s life. Either way, it absolutely pays to treat the rated capacity as a maximum that’s only specified at the rated current. And if you’re designing for reliability, you’ll still want to do some worst-case analysis and testing, and note that different manufacturers specify different rated currents — be sure to check the data sheet. Of course, what’s best for battery capacity may not be best for your project, and there’s something to be said for just making it work at all, efficiency be damned.

But that’s what we think is fun about working with coin cells. They provide very limited resources, so that every choice matters. Using coin cells forces you to focus on your power budget in a way that tossing a rechargeable lithium-ion battery pack into a box doesn’t. We hope that the lessons learned in the coin-cell playground will be more broadly applicable, and that you’ll all share what you find. If you find anything fun, enter it in the challenge or just let us know.