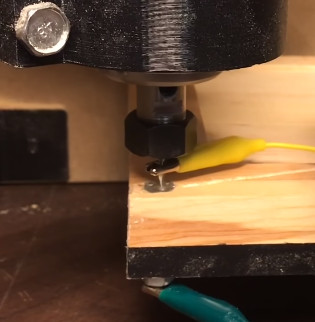 To level off the work surface, he then commanded the mill to cut out a solid rectangle to a depth of 2 mm. This makes sure that the bottom of the rectangle is perfectly flat in relation to the bit, as well as making a convenient pocket to hold the PCB still during the milling process. As an advantage of this milling process, the PCB can be used as soon as it’s done getting cut: no acid bath required. A fact [Chuck] demonstrates by soldering his components and showing off the working circuit he just designed.

At home PCB production is easily one of the most common projects we see submitted to Hackaday, a testament to how sorely the community is in need of the perfect solution. From lasers to inkjet printing, all sorts of methods are being investigated to turn this particular piece of the dream workbench into a reality.

10 thoughts on “PCB Production On The Sienci Mill One”