Today’s computers have to processes huge numbers of pixels, video data, audio data, neural networks, and long key encryption. Because of this, video cards have become what in the old days would have been called vector processors. That is, they are optimized to do operations on multiple data items in parallel. There are a few standards for using the video card processing for computation and today I’m going to show you how simple it is to use CUDA — the NVIDIA proprietary library for this task. You can also use OpenCL which works with many different kinds of hardware, but I’ll show you that it is a bit more verbose.

One of the things that’s great about being an adult is you are allowed to eat dessert first if you want to. In that spirit, I’m going to show you two bits of code that will demonstrate just how simple using CUDA can be. First, here’s a piece of code known as a “kernel” that will run on the GPU.

There are a few things to note:

So how do you call this kernel? Simple:

Naturally, the devil is in the details, but it really is that simple. The kernel, in this case, multiplies each element in x by the corresponding element in y and leaves the result in x. The example will process 1024 data items using one block of threads, and the block contains 1024 threads.

You’ll also want to wait for the threads to finish at some point. One way to do that is to call cudaDeviceSynchronize().

By the way, I’m using C because I like it, but you can use other languages too. For example, the video from NVidia, below, shows how they do the same thing with Python.

The details are a bit uglier, of course, especially if you want to maximize performance. CUDA abstracts the video hardware from you. That’s a good thing because you don’t have to adapt your problem to specific video adapters. If you really want to know the details of the GPU you are using, you can query it via the API or use the deviceQuery example that comes with the developer’s kit (more on that shortly).

For example, here’s a portion of the output of deviceQuery for my setup:

Some of this is hard to figure out until you learn more, but the key items are there are nine multiprocessors, each with 128 cores. The clock is about 1.8 GHz and there’s a lot of memory. The other important parameter is that a block can have up to 1024 threads. 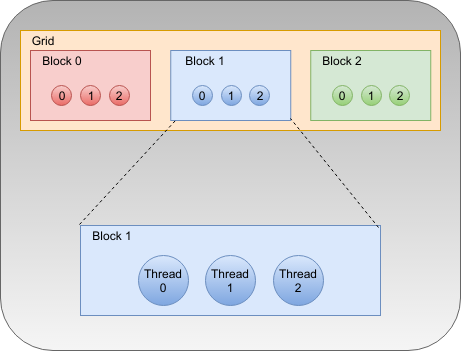 So remember the line above that said scale<<>>? That runs the scale kernel with a grid containing one block and the block has 1024 threads in it. Confused? It will get clearer as you try using it, but the idea is to group threads that can share resources and run them in parallel for better performance. CUDA makes what you ask for work on the hardware you have up to some limits (like the 1024 threads per block, in this case).

One of the things we can do, then, is make our kernels smarter. The simple example kernel I showed you earlier processed exactly one data item per thread. If you have enough threads to handle your data set, then that’s fine. Usually, that’s not the case, though. You probably have a very large dataset and you need to do the processing in chunks.

Let’s look at a dumb but illustrative example. Suppose I have ten data items to process. This is dumb because using the GPU for ten items is probably not effective due to the overhead of setting things up. But bear with me.

Since I have a lot of multiprocessors, it is no problem to ask CUDA to do one block that contains ten threads. However, you could also ask for two blocks of five. In fact, you could ask for one block of 100 and it will dutifully create 100 threads. Your kernel would need to ignore all of them that would cause you to access data out of bounds. CUDA is smart, but it isn’t that smart.

The real power, however, is when you specify fewer threads than you have items. This will require a grid with more than one block and a properly written kernel can compute multiple values.

Consider this kernel, which uses what is known as a grid stride loop:

This does the same calculations but in a loop. The base variable is the index of the first data item to process. The incr variable holds how far away the next item is. If your grid only has one block, this will degenerate to a single execution. For example, if n is 10 and we have one block of ten threads, then each thread will get a unique base (from 0 to 9) and an increment of ten. Since adding ten to any of the base numbers will exceed n, the loop will only execute once in each thread.

Of course, you could also ask for a block size of one and ten blocks which would have each thread in its own block. Depending on what you are doing, all of these cases have different performance ramifications. To better understand that, I’ve written a simple example program you can experiment with.

Assuming you have an NVidia graphics card, the first thing you have to do is install the CUDA libraries. You might have a version in your Linux repository but skip that. It is probably as old as dirt. You can also install for Windows (see video, below) or Mac. Once you have that set up, you might want to build the examples, especially the deviceQuery one to make sure everything works and examine your particular hardware.

You have to run the CUDA source files, which by convention have a .cu extension, through nvcc instead of your system C compiler. This lets CUDA interpret the special things like the angle brackets around a kernel invocation.

I’ve posted a very simple example on GitHub. You can use it to do some tests on both CPU and GPU processing. The code creates some memory regions and initializes them. It also optionally does the calculation using conventional CPU code. Then it also uses one of two kernels to do the same math on the GPU. One kernel is what you would use for benchmarking or normal use. The other one has some debugging output that will help you see what’s happening but will not be good for execution timing.

Normally, you will pick CPU or GPU, but if you do both, the program will compare the results to see if there are any errors. It can optionally also dump a few words out of the arrays so you can see that something happened. I didn’t do a lot of error checking, so that’s handy for debugging because you’ll see the results aren’t what you expect if an error occurred.

Here’s the help text from the program:

So to do the tests to show how blocks and grids work with ten items, for example, try these commands:

To generate large datasets, you can make n negative and it will take it as a power of two. For example, -4 will create 16 samples.

Although it isn’t super scientific, you can use any method (like time on Linux) to time the execution of the program when using GPU or CPU. You might be surprised that the GPU code doesn’t execute much faster than the CPU and, in fact, it is often slower. That’s because our kernel is pretty simple and modern CPUs have their own tricks for doing processing on arrays. You’ll have to venture into more complex kernels to see much benefit. Keep in mind there is some overhead to set up all the memory transfers, depending on your hardware.

You can also use nvprof — included with the CUDA software — to get a lot of detailed information about things running on the GPU. Try putting nvprof in front of the two example gocuda lines above. You’ll see a report that shows how much time was spent copying memory, calling APIs, and executing your kernel. You’ll probably get better results if you leave off the “p” and “d” options, too.

OpenCL has a lot of the same objectives as CUDA, but it works differently. Some of this is necessary since it handles many more devices (including non-NVidia hardware). I won’t comment much on the complexity, but I will note that you can find a simple example on GitHub, and I think you’ll agree that if you don’t know either system, the CUDA example is a lot easier to understand.

There’s lots more to learn, but that’s enough for one sitting. You might skim the documentation to get some ideas. You can compile just in time, if your code is more dynamic and there are plenty of ways to organize memory and threads. The real challenge is getting the best performance by sharing memory and optimizing thread usage. It is somewhat like chess. You can learn the moves, but becoming a good player takes more than that.

Don’t have NVidia hardware? You can even do CUDA in the cloud now. You can check out the video for NVidia’s setup instructions.

Just remember when you create a program that processes a few megabytes of image or sound data, that you are controlling a supercomputer that would have made [Seymour Cray’s] mouth water back in 1976.