By far, the most convincing argument for ‘crypto’ meaning ‘cryptography’ comes from cryptoisnotcryptocurrency.com. The argument and conclusion are laid bare on a red background and the emoticon of incredulity. ‘Crypto’ does not mean cryptocurrency, it means cryptography. A helpful link to a Google search of ‘cryptography’ reinforces this argument. 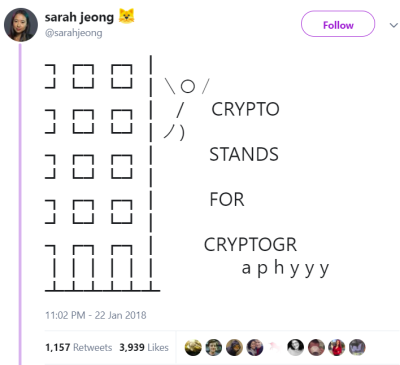 Others have weighed in. [sarah jeong], senior writer for The Verge has given her opinion. ‘Crypto’ means ‘cryptography’. [Matthew Green], who teaches cryptography at Johns Hopkins, says this is the hill he will die on.

[Lorenzo Franceschi-Bicchierai] writing for Motherboard, shares this opinion. He’s written about cryptography for a few years now, and is even a fan of [Stephen Levy]’s 2001 book, Crypto. “‘Crypto’ does not mean cryptocurrency.”, says Franceschi-Bicchierai, and he has the evidence to prove it. If you search Google, Merrium-Webster, or even the OED for the word ‘crypto’, there is only one conclusion to be made: ‘crypto’ means ‘cryptography’.

Even if all the experts and journalists in the world agree, it doesn’t make them right. ‘Crypto’ doesn’t mean ‘cryptography’, because ‘crypto’ is a prefix, and can be applied to many words. For example, writers for Vice and Motherboard are cryptofascists because they dictate the use of language to others. Cryptosporidium is a parasite whose spore has a hard outer shell, allowing it to remain outside the body and resist chlorination. It can lie dormant for many months — hidden, if you will. Cryptomnesia, a word with two Greek roots, is a forgotten memory remembered again.

The word ‘crypto’ comes from the Greek word kruptós, meaning ‘hidden’ or ‘secret’. For the past three thousand years ‘Crypto’, or however you spell that sequence of syllables, has meant hidden. ‘Crypto’ is simply a prefix. It does not mean ‘cryptography’, because ‘cryptography’ means hidden writing, and ‘cryptocurrency’ means secret money (or secret Lambos for those most invested in the culture). Think of it as English’s take on German’s compound nouns; words can be appended to each other to derive new meanings.

So what is this article about? An argument over a prefix. No doubt the argument will continue just like our defense of the word hack. But in this case ‘Crypto’ really does mean hidden. ‘Crypto’ has meant hidden since the time of Homer, and it’s not going to change just because of Bitcoin.

71 thoughts on “What Does ‘Crypto’ Actually Mean?”