Among the rows of digital dinosaurs, one blinking front panel stood out. It certainly looked the part of a retro computer; with banks of blinking LEDs and multicolored paddle switches. But upon closer inspection, the laser cut wooden front panel betrays the fact that this machine is an impostor. It may have the appearance of a machine from the heady days where home computers looked like they could have doubled as a prop on the bridge of Kirk’s Enterprise, but it’s actually a product of much more modern provenance. 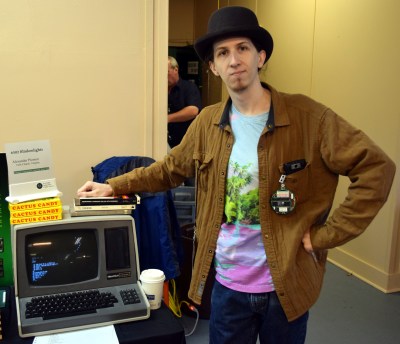 It’s called the Cactus, a love letter to the homebrew microcomputers of the 1970’s, designed and built by somebody at least 20 years too young to have experienced them the first time around. Alexander Pierson created the Cactus not because he had fond memories of putting together an Altair 8800 in 1975, but because he’s fascinated with the retro computer experience: the look of the front panel, the satisfying clunk of era-appropriate switches, and the idea that the computer’s inner workings aren’t an abstract black box but rather something you can interact with and study. Judging by all the attention the Cactus got at VCF East XIII, he’s not the only one.

Let’s take a look at everything Alexander poured into this retrocomputer build.

Best of Both Worlds

On paper, the Cactus is a pretty simple idea. Take the venerable 6502 8-bit microprocessor that powered (in some form or another) legendary home computers such as the Apple II and Commodore 64, and give it the classic front panel interface of the microcomputers that came before it. The appeal of such a computer is easy to see. You get the classic look and experience of the early kit computers, but with a more modern (relatively speaking) processor and capabilities.

It’s hardly the first time somebody’s wanted such a machine. We’ve seen people add “blinkenlights” to the Z80 in the past, so why not the beloved 6502? After all, it only missed the era of the blinkenlights by a few years. Plus, there’s already an incredible amount of information and prior art out there when dealing with the 6502. As with some other 6502 projects we’ve seen, the core design of the Cactus is based on the work of Grant Searle, with some inspiration from Quinn Dunki’s Veronica.

The front panel interface is similar to 1970’s era microcomputers, though it does have a few anachronistic niceties. For one, the data and address bus are clearly separated with different color LEDs and separate sets of switches. This makes it a bit easier to operate for the novice, though obviously does increase the part count and amount of wiring for the panel. In addition, the front panel is isolated from the actual data bus through a series of flip-flops, allowing for what [Alexander] calls a “temporary workspace”.

But perhaps the biggest advantage of a modern homebrew computer with a front panel interface: you can actually touch it. While there were plenty of Altair and IMSAI machines to look at, very few of their owners were inviting people to sit down and fiddle with them. Something about being 40+ years old and worth thousands of dollars kept the owners of said machines never more than a step or two away from them, oddly enough.

But Alexander literally had seats lined up in front of the Cactus and invited anyone to try their hand at examining the machine’s RAM or using the attached Heathkit H89 terminal to run BASIC programs. I spent a few minutes flipping switches on the Cactus, and while the infectious excitement of its proud creator sitting next to me may have had something to do with it, I can report it’s definitely a blast to use.

The Cactus features a backplane layout that contains seven hand-wired cards. The CPU, RAM, and EPROM cards make up the 6502 system itself, and the rest of the cards are dedicated to front panel operations. While nothing on the Cactus could be called extravagant, there are a few areas where Alexander went with higher end components than what would strictly be historically accurate. Such as using the WDC 65C02 processor (a CMOS version of the 6502) and a single 32K SRAM chip rather than loads of DRAM.

When Alexander walked me through the layout of the Cactus, he did mention more cards are planned for the future. Eventually he’d like to add capabilities such as more serial ports, an audio card, and perhaps even a video card. He’s even got ideas for things like tape drives and core memory, but they would be more educational experiments than practical equipment.

Alexander stresses that the Cactus isn’t finished, and that his journey is really only just beginning. He spent months researching and planning before he started piecing together the earliest versions of the Cactus, and that was already over a year ago. This project is as much about the experience as it is the end goal for him, and it’s obvious he’s in no hurry to stop working on his creation. It doesn’t take long to realize that he’s a classic perfectionist, and the idea of the Cactus being “Done” may well elude him forever as he continually finds new ways to improve the system.

Which is somewhat at odds with what many people, myself included, asked him at VCF: “When can I buy a kit?” Alexander says selling the Cactus was never the goal, but with such an outpouring of interest during the show he admits it’s something he needs to consider. Here’s to hoping we see a few more Cacti spring up by the next time VCF East rolls around.

19 thoughts on “VCF East: Cactus, Retro Because It Wants To Be”