With few exceptions, it seemed like every 3D printer at the first inaugural East Coast RepRap Festival (ERRF) was using a hotend built by E3D. There’s nothing inherently wrong with that; E3D makes solid open source products, and they deserve all the success they can get. But that being said, competition drives innovation, so we’re particularly interested anytime we see a new hotend that isn’t just an E3D V6 clone.

The Mosquito from Slice Enginerring is definitely no E3D clone. In fact, it doesn’t look much like any 3D printer hotend you’ve ever seen before. Tiny and spindly, the look of the hotend certainly invokes its namesake. But despite its fragile appearance, this hotend can ramp up to a monstrous 500 C, making it effectively a bolt-on upgrade for your existing machine that will allow you to print in exotic materials such as PEEK.

We spent a little time talking with Slice Engineering co-founder [Dan], and while there’s probably not much risk it’s going to dethrone E3D as the RepRap community’s favorite hotend, it might be worth considering if you’re thinking of putting together a high-performance printer.

A New Way to Keep Cool 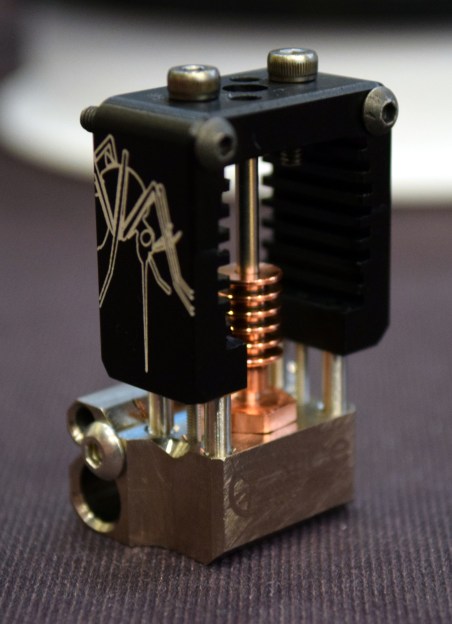 The most jarring feature of the Mosquito is the fact that it doesn’t have the traditional heatsink that we’re used to seeing with metal hotends. Generally speaking, hotends like the E3D V6 have a large cylindrical heatsink which is designed to keep the high temperatures of the heater from creeping up and softening the filament before it can be forced down into the melt zone.

The problem is that with traditional hotends, the heatsink (and the internal heatbreak) is effectively a structural component. It’s what the heater itself mounts to, so it must be relatively large and heavy. That extra mass means it can absorb more heat, so therefore it needs a way to cool off; hence the fins.

When designing the Mosquito hotend [Dan] and co-founder [Chris] wondered if there wasn’t a better way to do it. Rather than attach the heater to the heatsink, the Mosquito simply deletes it. The structural elements of the hotend, what actually attaches it to the printer, are kept separate from the path the filament takes. Since the thin tube containing the filament has very little thermal mass, it doesn’t get nearly as warm. A small fan blowing on the tube is all it takes to keep the filament from softening up.

The end result is a hotend which keeps the heat where it needs to be, and everything else cool to the touch. As part of their demonstration, [Dan] had a FLIR camera setup on a Mosquito running at operating temperature; making the sharp separation between the hot and cool sections of the device clearly evident. 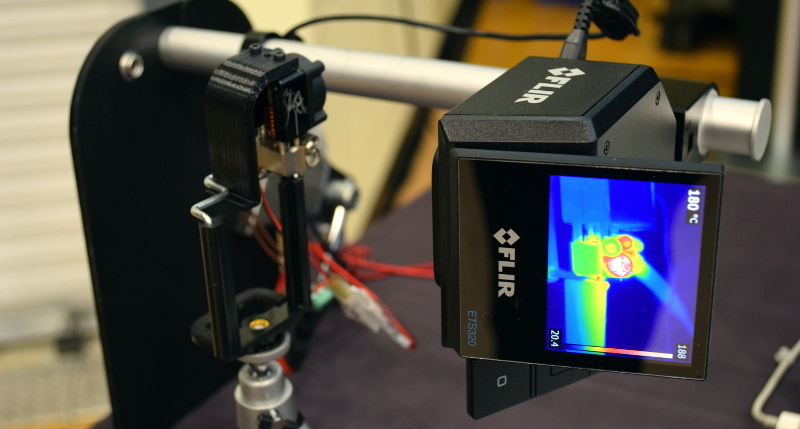 While the Mosquito might look pretty wild, [Dan] assured us that compatibility with existing printers was always part of the design. The heater core comes in 12 V and 24 V options, and the high performance thermistor can maintain accuracy through the Mosquito’s entire temperature range without having to resort to any kind of trickery like dual sensors. Electrically, the Mosquito is essentially plug-and-play on any desktop 3D printer. Though your firmware may need some tweaking to allow the kind of temperatures the Mosquito can reach.

There are a number of common bolt patterns built into the Mosquito, so you should be able to attach it to your existing printer without too much trouble. While a Bowden setup might be the most practical given the size and shape of the Mosquito, Slice Engineering has made available STLs for printable adapters that will let users connect their hotend to E3D Titan and Bondtech direct extruders.

If there’s one downside of the Mosquito, it’s the cost. Being American made you expect to take a hit in the wallet, but at the current pricing a Mosquito with heater core and thermistor (they have to be bought separately) comes out to $210 USD; three times the cost of the E3D V6. Granted the Mosquito is capable of higher temperatures out of the box. But with supplemental cooling and an upgraded thermistor, the E3D V6 could reach those temperatures and still cost less. Assuming your time isn’t worth anything, anyway.

The Mosquito is undeniably well engineered, impeccably manufactured, and arguably more capable out of the box than any other consumer-level hotend on the market. But money talks, and it will be interesting to see if the market will bear an American made “luxury” hotend in a sea of cheap E3D clones.

26 thoughts on “ERRF 18: Slice Engineering Shows Off The Mosquito”