The Laser and the Film 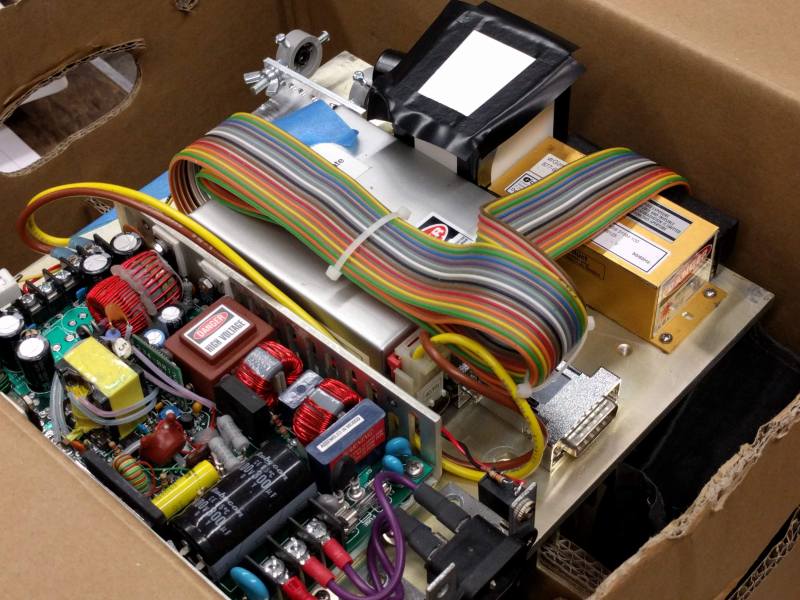 Tommy is using a 100 mW laser meant for a machine that etches aluminum printing plates for offset printers. He described this as “a laser printer on steroids”. Apparently a bunch of these hit the used market and the cost was reasonable. I didn’t get more info than this and my eBay-fu failed me but if you have more info please leave a comment below.

Here we see the laser inside its cardboard enclosure (click for the full size image). The laser module is the gold box to the right. The beam shines to the left, through the white box that has electrical tape on it, through two lenses that spread the size of the beam, and out of a hole in the box which is just out of frame (top edge of this image). The module in the middle connects to the control circuitry for the laser, and to the left is a power supply board. 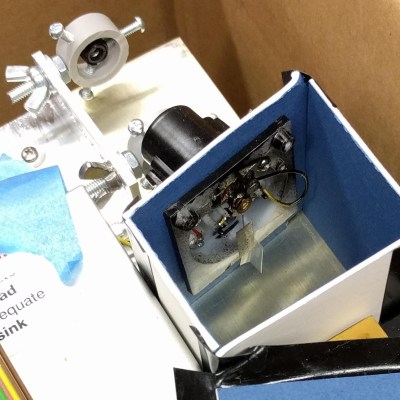 Here you can see the inside of that white box which houses a shutter system for the laser. It takes about 10 minutes for it to adequately warm up and the diode is on the entire time. A shutter is necessary to ensure the film is exposed only when the beam has reached full power.

This shutter is an excellent hack. Tommy pulled the needle mechanism from an analog voltmeter and attached a mirror to the needle. The mirror itself is a hack; he used that shiny silver material that you find if you disassemble a retail store anti-theft tag. This is a very cool choice since it is both adequately shiny and light-weight. The meter’s needle can be moved aside simply by injecting a bit of voltage.

When the shutter is open the beam shines through two lenses. These are responsible for directing the beam and diffusing it. I wondered if the beam needed to scan over the subject being photographed. But at a range of around 30 feet, the beam will cover the entirety of the film, exposing it in one shot. 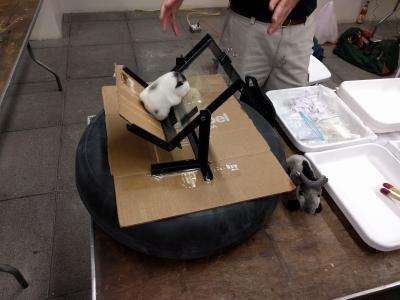 The film apparatus itself is another set of cool hacks. Optics are highly prone to vibrations, and any movement more than 1/4 of a wavelength is enough to blur the exposure. To account for this, the jig that holds the film sits atop an automotive inner tube — an air cushion to isolate the jig from any vibrations transmitted through the floor and up the table.

The photo here shows a stuffed animal as the subject of the hologram, but it does not show the film itself which is normally held up against the glass to the right of the subject. This is at an angle to the incoming beam, call it 45 degrees. The angle isn’t crucial, you could expose the film straight on. But if you did, the light source necessary to reveal the hologram in the final product would also need to come straight on. Exposure at an angle allows you to look directly at the film and place the light source at an angle to it so that your head isn’t in the way of the light. This is what Tommy is demonstrating in the image at the top of this article.

Tommy purchases his film, which is much higher resolution than traditional  photographic film, from a person who makes their living as a holographer and sells the film on the side. The development process is similar to traditional photography, conducted in a darkroom using chemical baths.

Unfortunately Tommy hasn’t written about this holography equipment before, but he plans to do so on his homepage. Already up is a delightful collection of his other, more involved holography experiments. I also enjoyed check out the webcam of his shop which has a pleasingly mad-scientist feel to it! I’m going to keep my eye on this link for more details. Until then, check out the two-page guide he put together for the workshop.

28 thoughts on “HOPE XII: Make Your Own Holograms”