The Kepler spacecraft is in the final moments of its life. NASA isn’t quite sure when they’ll say their last goodbye to the space telescope which has confirmed the existence of thousands of exoplanets since its launch in 2009, but most estimates give it a few months at best. The prognosis is simple: she’s out of gas. Without propellant for its thrusters, Kepler can’t orient itself, and that means it can’t point its antenna to Earth to communicate.

Now far as spacecraft failures go, propellant depletion isn’t exactly unexpected. After all, it can’t pull into the nearest service station to top off the tanks. What makes the fact that Kepler will finally have to cease operations for such a mundane reason interesting is that the roughly $600 million dollar space telescope has already “died” once before. Back in 2013, NASA announced Kepler was irreparably damaged following a series of critical system failures that had started the previous year.

But thanks to what was perhaps some of the best last-ditch effort hacking NASA has done since they brought the crew of Apollo 13 home safely, a novel way of getting the spacecraft back under control was implemented. While it was never quite the same, Kepler was able to continue on with modified mission parameters and to date has delivered so much raw data that scientists will be analyzing it for years to come. Not bad for a dead bird.

Before Kepler goes dark for good, let’s take a look at how NASA managed to resurrect this planet hunting space telescope and greatly expand our knowledge of the planets in our galaxy.

To understand the problems Kepler ran into, it’s important to understand how Kepler searches for planets. The telescope watches a section of the sky and carefully notes the dimming and flickering of individual stars. While on Earth the stars appear to twinkle due to refraction as the light passes through our atmosphere, in deep space the light from stars should be constant unless it’s physically blocked by something. Operating under this principle, Kepler looks for disruption in the light from a star which can indicate that there’s a planet in orbit around it. With careful observation it’s possible to determine the size and number of planets around each star; allowing us to virtually image distant solar systems.

As you might expect, for this to work Kepler must be able to control its orientation in space very carefully. The stars need to remain relatively stationary from the perspective of the telescope to minimize false positives. As anyone who does astrophotography here on Earth can tell you, there are ways to compensate for drift and noise to get clearer images of the sky. But for the best results the camera really needs to be locked onto the stars as closely as possible.

To maintain its orientation, Kepler was outfitted with thrusters and four reaction wheels: flywheels that are used to store angular momentum and apply torque on the spacecraft. Thrusters are ideal when large changes to the spacecraft’s orientation are required, with the reaction wheels reserved for small and precise adjustments. Unfortunately, in 2012 one of Kepler’s reaction wheels started having problems. This left three remaining, which was enough to continue on with the mission, but in 2013 another wheel shut down. With only two functioning reaction wheels the spacecraft was unable to precisely align itself during observations, effectively ending its original mission.

At this point the mission had already accomplished its scientific goals. Even if Kepler never looked at another star again it would have still been a huge success. But as the spacecraft was still largely functional, NASA started looking for a way to utilize it with a revised scientific mission the agency referred to as K2.

NASA realized that with only half of the reaction wheels operational, there was no way for Kepler to equally apply torque in all dimensions. Trying to use the two remaining wheels would simply cause the spacecraft to tumble. What NASA needed was a way to apply some sort of pressure on the craft which the remaining reaction wheels could push against. The solution came from a rather surprising place: the sun. 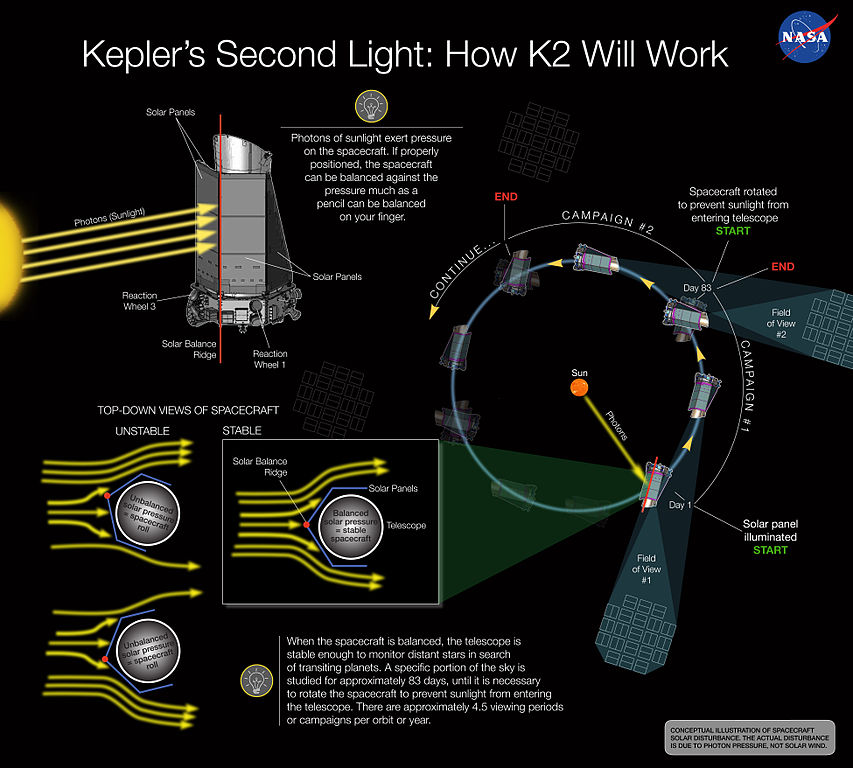 The fix NASA came up with exploits the fact that photons striking the spacecraft exert a constant, if slight, force. By carefully maneuvering Kepler to face the sun in the proper orientation, the two remaining reaction wheels can be used to apply torque in opposition of the solar pressure. Once equilibrium is reached, the spacecraft is balanced well enough that it can continue making observations.

It’s not a perfect solution. Positioning Kepler with this method consumes more thruster propellant than would normally be required, and there’s been a considerable drop in sensitivity due to the fact that this careful balancing act isn’t quite as stable as when orientation was being controlled by all four reaction wheels. But even still, the Kepler K2 mission has managed to collect invaluable scientific data over the last four years from a spacecraft that many wrote off as dead.

Had all four reaction wheels remained operable, Kepler probably wouldn’t be running out of propellant right now. Ironically, the increased propellant utilization necessary to keep Kepler positioned relative to the solar wind has, in a way, hastened the end of the mission. But considering the alternative was to have shut Kepler down in 2013 when it first started tumbling through space, it was a supremely successful hack.

As it stands, NASA isn’t 100% sure how much propellant Kepler still has in the tanks. Believe it or not, there’s no way to tell with the sensors onboard. They can estimate based on how much was in the tanks when it left Earth and how many burns they’ve done, and that tells them they are getting down to the wire. But until they command the thrusters to fire and nothing happens, there’s really no way to know for sure if the tanks are dry. Accordingly, NASA is limiting thruster usage as much as possible.

When the thrusters start sputtering and NASA knows Kepler is in the final moments of its life, they will command it to point its high-gain antenna to Earth and make one last broadcast of all the data its collected before powering down forever. Kepler’s orbit is far out enough that it will never return to Earth or get close enough to anything else in the solar system to be a problem. It will likely spend the rest of eternity as a deep space monument to human ingenuity and our insatiable need to explore.