To turn that “No” into a “Yes”, last summer a team of JPL interns were tasked to translate ROV-E into a rover that could be built by a class of high school students. Assembled from parts anyone could buy, using only tools that one would expect to find in a school shop. The project budget of $2,500 is a tiny fraction of ROV-E’s aerospace-grade price tag. While still on the high side for an individual, it could be reasonably compared to the expense of school group activities like a marching band or a sports team. After JPL interns delivered the initial prototype, the instructions were further refined and put through several beta test builds with people outside of JPL for additional feedback. (Disclosure: [Roger Cheng] was on one of the beta test teams.) Now it is available to all the teachers who have ever asked if they could build their own rover. 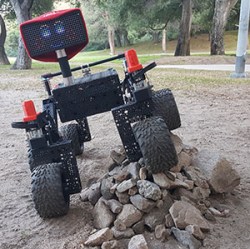 For their money and effort, the school will end up with a rover that demonstrates the six-wheel rocker-bogie suspension system used by all JPL Mars rovers. The flexible structural construction pieces allow students to easily experiment with changing suspension layout, and see firsthand how their changes affect a rover’s ability to traverse terrain. The motor controllers leave plenty of headroom for the students to build sophisticated robot software, offering closed-loop control of velocity and position communicated over a shared serial bus. A Raspberry Pi 3 is recommended as the brains of the rover, because of its vast ecosystem of software tools and libraries with which to build that software.

Though designed for education, it is not limited to schools so any of us are free to build our own. In the spirit of open source, we are welcome to follow the instructions and build the rover as-is or devise improvements of our own design. There’s a web forum set up for community discussion and support, and don’t forget to add all of our rovers to the ranks on Hackaday.io! We love rovers of all kinds – from simple PVC pipes to mind-blowing LEGO creations.