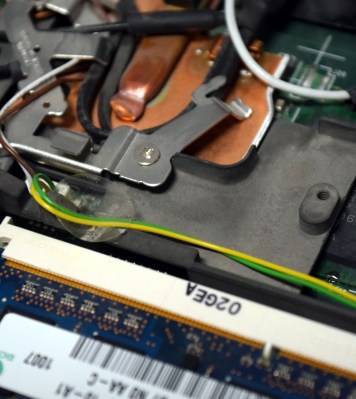 Cutting the frame instead of pulling the motherboard would be much faster, but did pose a few worrying problems. A major concern was the copious amounts of magnesium dust that taking a rotary tool to the frame would dump onto the motherboard. Granted magnesium isn’t a terribly great conductor, but it might still wreak havoc on the board if it worked its way into sensitive areas. The instructions also mentioned disconnecting all of the components from the board, which obviously I wouldn’t be doing either.

But above all, the biggest risk in this attempt would be the human element. There’s precious little space between the laptop’s frame and the motherboard itself, and the smallest mistake could gouge the PCB or destroy one of the components on it. If the cutting wheel even just taps anything beyond the frame itself, it could be game over.

Long story short, you shouldn’t go this route unless you can afford to lose the laptop if things don’t go well. If you have any strong feelings about this particular T400, or actually need to have a working machine after all is said and done, you might just want to spend the time to follow the official installation procedure.

With a cutting wheel chucked up in the Dremel, the frame material gives way pretty quickly. I had to keep the speed fairly low and the pressure light, or else I was worried I’d blow right through it and dig into the motherboard. The metallic dust produced gets everywhere, and even if you’re normally too macho for eye protection, you’d be a fool not to use them for this. In fact, a dust mask would be a good idea as well.

The right hand cut is easy enough to make, and a relatively forgiving area to start with. I did end up digging into the plastic of the memory socket, but luckily it was one of the few things you can hit in there without doing any damage. On the left side, things get tricky. I was able to make a straight cut across the top of the chip with the wheel, but then had to widen the opening with a carbide burr to make enough room for the clip to attach.

After verifying I had enough clearance to get the clip on, I took the T400 outside and started hitting it with compressed air from as many angles as I could. I easily spent as much time blowing the magnesium dust out of every nook and cranny of the case as I did actually making the cuts. The process can be helped along by removing the optical and hard drive, as that will give you another opening to blow air through. Since there was really no way to tell when this phase of the process was done, I basically just keep going until my patience ran out.

While on the subject of shooting compressed air into electronics, I should mention my compressor has a coalescing filter on it to take moisture and oils out of the air before it reaches the blow gun. An unfiltered compressor can spray all sorts of atomized liquids and contaminates out, so you want to be very careful about the source of air you plan on using if you want to clean something like a motherboard.

Our own Bryan Cockfield wrote up an illuminating first hand account about the highs and lows of flashing LibreBoot which is a must-read for anyone looking to take the plunge, so I won’t go over it all again here. Suffice it to say, the process isn’t exactly beginner friendly. From getting the programmer wired up to modifying the LibreBoot ROM file with your machine’s MAC address, it’s a path only to be walked by the true disciples of Saint IGNUcius.

That being said, the process went pretty smoothly. For my programmer I used a Raspberry Pi 3B+ and didn’t need an external power supply. I had a bit of trouble getting the clip attached onto the chip securely, but once it was on there tight enough that the flashrom tool could see it, it stayed connected until the process was complete.

The entire flash took just shy of 10 minutes with this setup, which compared to some of the horror stories I had read on forums, was a relief.

In the end, the process was a success. The T400 didn’t short out due to insidious magnesium particles (at least, not yet), and I was able to boot up to a USB flash drive to start the installation of Arch Linux. Start to finish it took a fraction of the time it would have to strip the machine down and build it back up. As for the experience of using LibreBoot itself, there’s definitely a learning curve. It still seems strange to me that there’s no configuration options anymore, the computer just boots directly into GRUB.

LibreBoot devotees will tell you that it increases performance and extends battery life, but I can’t speak to that because I never really used the computer before installing it. One thing I can tell you for certain is that if you’ve got a ThinkPad T400 with a locked BIOS, a Dremel, and nothing to lose, there is a light at the end of the tunnel.