Libreboot is a piece of free software that replaces proprietary BIOS firmware on some modern computers. This has, surprisingly, become increasingly difficult to do as Intel ramps up deployment of the Intel Management Engine. In a nutshell, the IME is a separate processor that can monitor or even take over everything happening in a computer and send that information out over the network to anyone (or any company) that has control of it. It does so without any knowledge of the user and is (obviously) a huge security vulnerability. Since Intel’s competitors do similar things, there’s almost no escape unless you can replace the IME with something like libreboot or coreboot.

Not as Easy as You’d Think 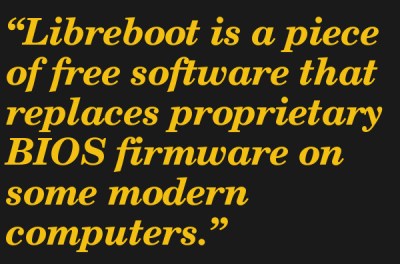 When I started researching libreboot, I assumed that it would be a simple process: download it and run some installer on my computer that would re-flash the BIOS. It couldn’t take any more than a half hour! Especially since the original article simply said “install libreboot” as if it was something that a child could do in between naps. The reality of what I was about to dive into, however, was much different.

First of all, libreboot only works on a handful of older ThinkPads. Newer models have fallen victim to a new strategy by Intel of checking the firmware loaded on the BIOS chip and disabling the computer if an unapproved firmware is discovered. Apparently Intel thinks that fixing security flaws or modifying something that you own is ridiculous and unacceptable. Anyway, I picked up an eight-year-old X200 on eBay for $65 shipped. I’m a simple guy who enjoys simple but reliable things even if they’re getting along in years, so the age of the computer wasn’t too much of a concern for me. Thinking I was doing pretty well for myself, I took a look at the installation instructions for the new firmware.

This is a step I probably should have taken before ordering the computer. Not that it would have stopped me from doing this, but it probably would have given me a better idea of what I should expect from this process. First of all, I found out that to flash the chip, disassembly and soldering would be required. The firmware has to be programmed directly. Anytime something like this is done, bricking the device is a real possibility. At least I would only be out $65.

Then, I learned that the BeagleBone Black is the preferred device to use to flash the new firmware to the ThinkPad. I have three Raspberry Pis lying around, but I went ahead and suspiciously ordered a BeagleBone for $40. Couldn’t hurt, I told myself, and I’ll have a new tool to use for other stuff in the future. But it did seem weird that there wasn’t an option to use a Raspberry Pi.

The next hurdle was figuring out exactly what type of firmware chip I had in my laptop, because there are different SOIC clips for different types of chips, and the only way to find out which sized chip I had was to get the laptop and take it apart. This set me back a few days (and another $10) waiting on the correct clip to arrive. During this process I also learned that there is no free software that will run on Intel’s proprietary WiFi card in these computers, so I also ordered an Atheros card to install ($15) since I had the laptop taken apart already.

Moving along, the BeagleBone had to be configured in a very particular way. I had never interacted with one of these before, and it’s not quite as straightforward as a Raspberry Pi. This process took me a few hours over the course of two days. I also learned through a third-party tutorial that Libreboot actually can be flashed with a Raspberry Pi, but this is one (among many) situations where the libreboot folks will go to great lengths to use free and open source software when they can. The BeagleBone fits their requirements, the Pi does not, and they do not mention this. I could easily have saved myself the $40 and used a Pi, but in the spirit of libreboot (and the fact that I was too far along to switch) I pressed on.

Most of the problem I had setting up the BeagleBone is with libreboot’s files and instructions. For example, at one point I had to patch the libreboot ROM file with a MAC address descriptor specific to the Ethernet card in my laptop. It wasn’t immediately clear which script out of the many provided would do this. Even then, the different ROMs that are available were all in a single folder, and unless you realize this immediately you’ll fill the memory of the BeagleBone when you unzip the archive. In general, it felt like I needed multiple degrees in computer science to make sense of their instructions on the first try. This can be a common plague of free software: alienating people through documentation that doesn’t relate to those with less knowledge and experience. And I’m not exactly an amateur, either. I have a degree in electrical engineering and passable knowledge of what’s going on, but even then I felt like I was blindly charging through a dark jungle of jargon.

Anyway, the BeagleBone Black I received didn’t have a display output (that I could find; I’ve never used one before and might have been missing something) and I had some difficulty getting it to work over the USB link to my Mac. That meant getting it on the network via Ethernet, and since my router is in the kitchen I set up shop there. After soldering some wires to the SOC clip, I was finally ready to start flashing some firmware. At this point, I’ve had the X200 for almost three weeks, all spent waiting on parts I couldn’t have known I needed and programming the BeagleBone to act as a programmer.

The actual flashing only took me about an hour and a half, though. Once I figured out which ROM to use and hooked up my 3.3V power supply (luckily I had one of these cobbled together already) it was a fairly simple process to back up the factory ROM, verify it, and start flashing libreboot. There was one major hiccup at this point, though. I attempted this process four times, and each time the new firmware couldn’t be verified. Error messages appeared everywhere, which is not something you’d want to see at this point in the process. The BeagleBone wrote the firmware successfully but afterwards, for some reason, couldn’t verify it. After getting a little anxious that I might have failed after all of this work, I decided to stick the battery in the laptop to see if it would boot up. I saw the picture of Tux and Gnu hanging out on my BIOS screen, and made the executive decision that libreboot was successfully installed. I went ahead and installed Ubuntu to make sure everything would work correctly since I already had an Ubuntu live-USB stick lying around. Even the new WiFi card seems to work well (except it doesn’t have a 5 GHz antenna like the Intel card did, but that’s not too big of a deal).

Free software aficionados will note that Ubuntu isn’t really the pinnacle of the free software movement. It’s been criticized for including proprietary software, binary blobs, and other issues. That being said, after the initial Ubuntu test installation, I did try to install Trisquel (crashed during the install because it got confused that the X200 doesn’t have an optical drive), a version of Arch called Parabola (wouldn’t boot from a USB stick) and another Debian-based distribution called gNewSense (you have to chuckle at the terrible name), but I found all of them to be difficult to install, unusable, or both.

For now, I’m happy just to have neutralized Intel’s Big Brother and I’ll probably keep using Ubuntu until the libre distributions have improved a little more (or I get really bored one day and decide to try again). Even though the process to install libreboot was tedious, it is possible. I would recommend having a libreboot computer to anyone who cares about privacy, security, or freedom. Even if you don’t want to throw your Apple in the garbage.

58 thoughts on “Harrowing Story Of Installing Libreboot On ThinkPad”