Some of the most satisfying projects of all are the ones that do something visual. All the network routers, data loggers, and thermostats are great. But we are visual creatures and even a humble blinking LED is enough to give you a little rush even compared to finding a large prime number. We wanted to see what our community could do visually with a Raspberry Pi so we challenged you with the Visualize it with Pi contest.

As always, the competition was brisk, with a lot of great projects. This contest showed off the trend towards using LED modules and assemblies to add visuals to projects. Why not? They are cheap enough and a well-integrated module can make a project simple to wire and integrate.

We didn’t see as many media-related projects as you might expect, although there was one tied into Stranger Things, one to Tron, and the virtual reality lighting project did have some Star Wars images. Projects ranged from the practical storage box labels to the whimsical lemonade bottle that strobes to the beat of the music. If none of that is hardcore enough for you, there was even a Raspberry Pi-controlled radio telescope. You can find all the entries over on Hackaday.io. Now let’s see which entries managed to turn the head of the judging panel.

We have to say that [makeTVee’s] title doesn’t do this project justice. Playing Tetris on some LEDs is fun, but there’s more to it than that. We guess “giant wall-mounted Wi-Fi-controlled retro game console” seemed like too much of a mouthful. Have a look at the video below to get an idea of what this one’s all about.

We liked the attention to detail and, of course, the size. This isn’t just a one-trick pony, either. You can play snake or pong and — of course — roll your own. The construction alone is wall-worthy and the project documentation is great, too.

The International Space Station has been in the news a lot the last few weeks. Tracking the station is no big deal these days, but how do you show the data about where exactly to look? [Bornach] wanted to use an LED ring but found they didn’t make them as large as he needed to get good resolution. Spinning LEDs would take slip rings or some other scheme to get data and power to the spinning part. Instead, this project uses LEDs and a spinning mirror connected to a stepper motor. The result is a longitude display with different colors and line lengths representing the latitude of humanity’s city in space.

The whole thing only takes 36 LEDs although as you might expect only a few of them are visible to the mirror at any given point in its rotation. [Bornach] plans to use Hall effect sensors to make the display act like a compass. There’s also plans to add more LEDs and even project it on existing surfaces like walls. Can’t wait to see some of those!

We almost feel like we had a part in inspiring [Solenoid’s] IoT LED Matrix display. The 32×32 RGB LED matrix used was won in a previous Hackday contest! The Raspberry Pi is a Node-RED server and uses MQTT. It streams data to an ESP32 that drives the LED matrix. Of course, the display could accept data from any server. 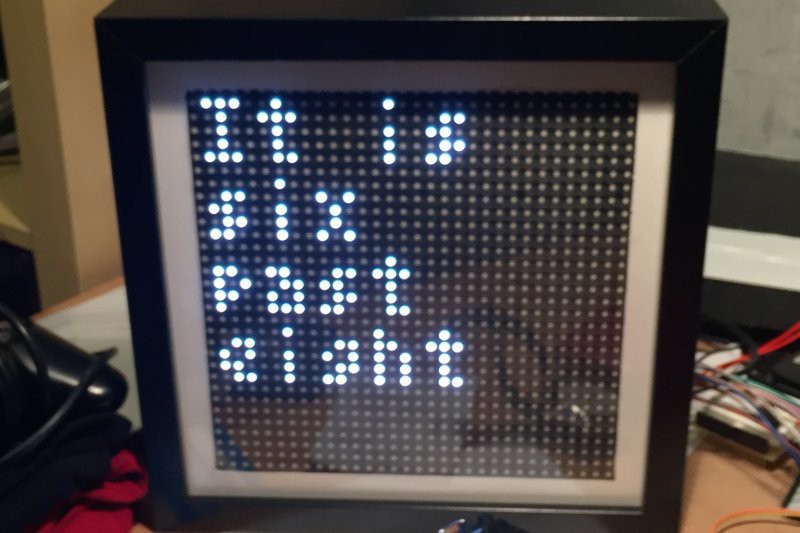 Node-RED is certainly cool and this would be a good project to get your feet wet with it. The documentation is good and in addition to a word clock, there’s even a Jolly Wrencher to throw up on the screen. With MQTT spreading everywhere, you are sure to find a use for a display like this one.

It is hard to imagine how you can improve a bottle of lemonade. But [Aileen Xi] managed it by making a bottle with a sound detector to pick up a musical beat and show the beat with lighting effects.

The Pi in the design, by the way, is a Pi Zero and there’s an ADS1015 analog converter, too. The project works but there are improvements planned including a sensitivity control and better packaging of the components with the bottle.

We are always impressed with what our Hackers can come up with and while these were the judge’s top picks,  there were plenty of other great projects competing too. From guitar hero to desk clocks, if you take a few minutes to browse, you are sure to find something you’ll enjoy.

Congratulations to the winners and all the entrants for coming up with some amazing Pi projects. As you might expect, the prizes included some LED rings and strips to help light up their next entries! Be sure to watch for our upcoming contests, too. You have to enter to win.

One thought on “Contest Results: Raspberry Pis Put On A Show”