A weekend for people who love hardware, by people who love hardware. It’s a simple recipe and it makes a delicious event that we call the Hackaday Superconference. If you made it to Pasadena last weekend, I’m sure going back to work on Monday was difficult after three days of far too little sleep and way too much fun. (It was for me.) If you didn’t make it to the con, set a reminder for July 1st to start watching for next year’s early bird tickets. Don’t believe me? Okay, let’s step through the hype of a weekend we’ll all remember.

Check out the recap video above and then join me after the break for a photo-heavy expose of the weekend’s highlights.

I think it’s really important to start an overview of Supercon by talking about the culture. We have amazing organized events led by people who are world-class in their fields: see the talk section below. But that wouldn’t matter if the vibe of the Supercon didn’t also meet those expectations.

Checkin began at 9am on Friday

We call the community of Supercon the Hacker Village. This is place of inclusion and acceptance. One of the first things I saw on Friday morning was a gentleman wearing a wooden cutting board on a string around his neck — the substrate for a custom Raspberry Pi powered badge. This is seen as perfectly normal. Want to wear your custom synthesizer around as a belt buckle? Perfectly normal. In fact it’s exactly the sort of thing I want to see at a conference; people who do the things they’re passionate about and are happy to share the story.

Surface plotter in the badge in just a couple of hours

Grab a seat on the sofa and form up into teams to solve the badge puzzle challenge, to set up the compiler toolchain for reprogramming, or to resurrect your rusty BASIC programming skills? All normal.

Tentacle workshop getting under way

Heck, we had an animatronic tentacle workshop going on next door to a LoRaWAN workshop. Once those wrapped up it was an emotive module wearable workshop next to a Logic Noise workshop. This was all while a room packed with tables and soldering irons for badge hacking and trying to solder the smallest of surface mount components in the least amount of time. And that was just Friday, before the talks started. 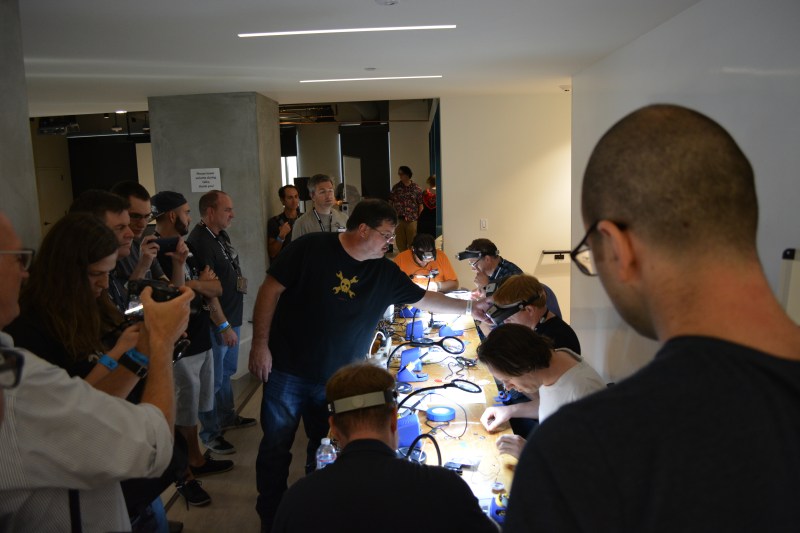 I must say that one of the coolest sights for me was the crowd gathered around the SMD Soldering Challenge to spectate as people soldered — how often do you get to enjoy that!

The evening brought the Supercon launch party. New this year was a poster session featuring a collection of excellent Hackaday Prize entries and a chance to meet the people who created them. On the patio, people started unpacking projects they brought along. Will Caruana cobbled together a High-Voltage Operation game that really shocks you when you touch the sides. Bart Dring brought along a TWANG game that he built, along with several interesting CNC creations!

Andrew Bakhit gets the party going with the opening set

There was a live set remixing all of the original music Rich Hogben composed for Hackaday events over the last five years. Opening for Rich, Andrew Bakhit — you may also know him as the man behind Drummin’ Tesla — set the mood.

Would you believe that this was still just the first day?

The venue for Saturday and Sunday is a combination of the Supplyframe DesignLab and the Los Angeles College of Music. Together they’re one building, but the cool thing for us is that they share a private gated alley out back which we appropriate with tents, tables, solder fumes, good eats, and a lifesaving coffee bar.

Badge hacking in the alley

Still fun, even in the back of the line

Front of the line Saturday before doors open

Badgelife Exhibit was a place where everyone congregated

Bill Gross and Erin Kennedy chat after the Keynote

There were a few people who never left the badge hacking area until they were forced to pack up on Sunday evening because the rental company needed to take the tents down. The amount of gear coming out of backpacks and roller bags was awesome. We had pre-ordered parts for adding onto the badges, but that supply was definitely dwarfed by what people brought along with them, and it was really nice to see so many people sharing their supplies with one another to help bring a hack to fruition.

DJ Jackalope at the Prize after party

Group photo after the Hackaday Prize

Workshops continued through the weekend, shoulder to shoulder with badge hacking and the SMD Challenge. The Hackaday Prize party packed the alley from one brick wall to the other, while DJ Jackalope played a set in DesignLab amid pinball, foosball, and yes, even dancing. The destructive tolerance testing (yep, let’s go with that) began very late in the evening as the high-voltage supply for a neon sign came out, and the leftover dry ice from The Coolest Workshop was reappropriated. [Krux]’s hard-drive platter flinger made people driving down the alley come over and ask what was going on.

We saw wearables of all kinds displayed proudly. And a NASA robot (probably an unofficial one) showed up to hang out around the coffee bar. There was a blimp/kite hanging out, and a microscope soldering station popped up spontaneously along with iPhone circuit boards to practice on sub-millimeter solder joints.

Your Best Chance to Relive It: The Talks

With over 50 talks and workshops, the organized program of Supercon was beyond my wildest expectations. Thank you to everyone who submitted a proposal this year. It was a nerve-wracking experience for our selection panel as we easily had three times the number of qualified submissions for the available time.

The good news is that we recorded all of the talks. There are two stages at Supercon, one is live-streamed and those talks are already available to watch on the Hackaday YouTube channel. The other stage was recorded and will require editing before we can get the talks posted. Follow us on YouTube so that those are added to your feed as they become available.

Personally, I didn’t get to see very many of the talks live so I have a lot of catch up videos on my list. I was Emcee for Kitty Yeung, Sam Zeloof, and Sprite_TM and was giddy about each of their presentations. It’s easy to be intimidated by how great they all were as presenters — but turn that around and try to learn the tricks they use to make their talks awesome. I also caught Bill Gross’ keynote on Saturday morning which was an eye-opener packed with hard-won advice on what to do with a good idea to turn it into a successful startup without breaking that good idea along the way. Also check out Erika Earl’s talk which I think takes the cake on clever titles: How to Stay Grounded When You Have Zero Potential.

I could co on forever but this article is already running long. There’s one more thing I need to say:

We brag about this being the ultimate hardware conference. I believe that’s a truthful boast and I hope those of you who were there can back me up on that claim in the comments below. It’s branded with the Hackaday name, and it’s planned and organized by a dedicated staff who moved mountains to make it spectacular, but it’s really the participants who make it outstanding.

You bring the talks. You bring the hacks. You bring the knowledge and the brilliant conversations. This is the fourth year for Supercon, and it really feels like the event now belongs to the community. There’s a growing group of people who’ve been to past Supercons, and without whom it just wouldn’t be the same, and this year’s new faces will be next year’s old friends. Let’s make it even more amazing next year!

7 thoughts on “It Happened At Supercon: Six Days Of Fun In A Three Day Con”