LED Wristwatches are Hard to Come By 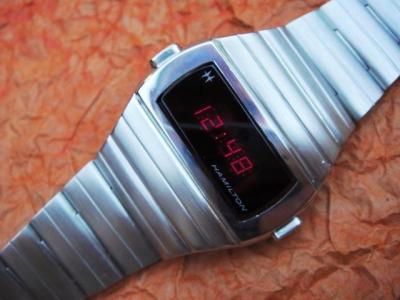 These early digital watches consume copious amounts of power, burning through batteries every three to six months even when used lightly. Most LED watches feature day, date, month, seconds, and perpetual calendar. Some even feature alpha-numeric segments for displaying the day. It is tough to find working LED VDWs. Plan to either pay a fair market value for a working one or to buy numerous modules (module is the name for the VDW movement) or complete watches to make one work. Given this scarcity, if you can get an LED working you will become king of the geeks.

I bought this watch, made by National Semiconductor, as new old stock (NOS). It was completely dead and suffered from battery corrosion that went so far as to damage bond wires going to the IC. I ended up buying two additional watches to make this one work.

If you want to wear something different consider a mid to late 70’s LCD VDW. These watches are fairly inexpensive and easy to service, most of the time requiring only cleaning of battery and button contact terminals.

With 1970’s VDWs you can find everything from perpetual calendars, chronographs, alarms, to world timers. In the 1970’s the digital watch cases were over-built, big, metal, and heavy. These bold designs hold up well today.

The legendary tech companies of our youth have only one thing in common; they each made digital watches in the 1970’s. Apparently, the sale price and the cost of goods aligned with the business plans of these behemoths of tech including; Commodore Computer, National Semiconductor, Texas Instruments, and Fairchild Semiconductor.

Michael J. Fox wore one in the most iconic electrical engineering move of all time, Back to the Future. In the film he wore the Casio CA-50. Surprisingly enough you can buy one new today for $18-24.

If that’s not cool enough then consider the late 70’s calculator watches, many of which feature stainless steel buttons. Of all the watches in my collection the one pictured below gets the most attention. I like to tell my young daughters that this watch has an ‘elf keyboard’ on it. 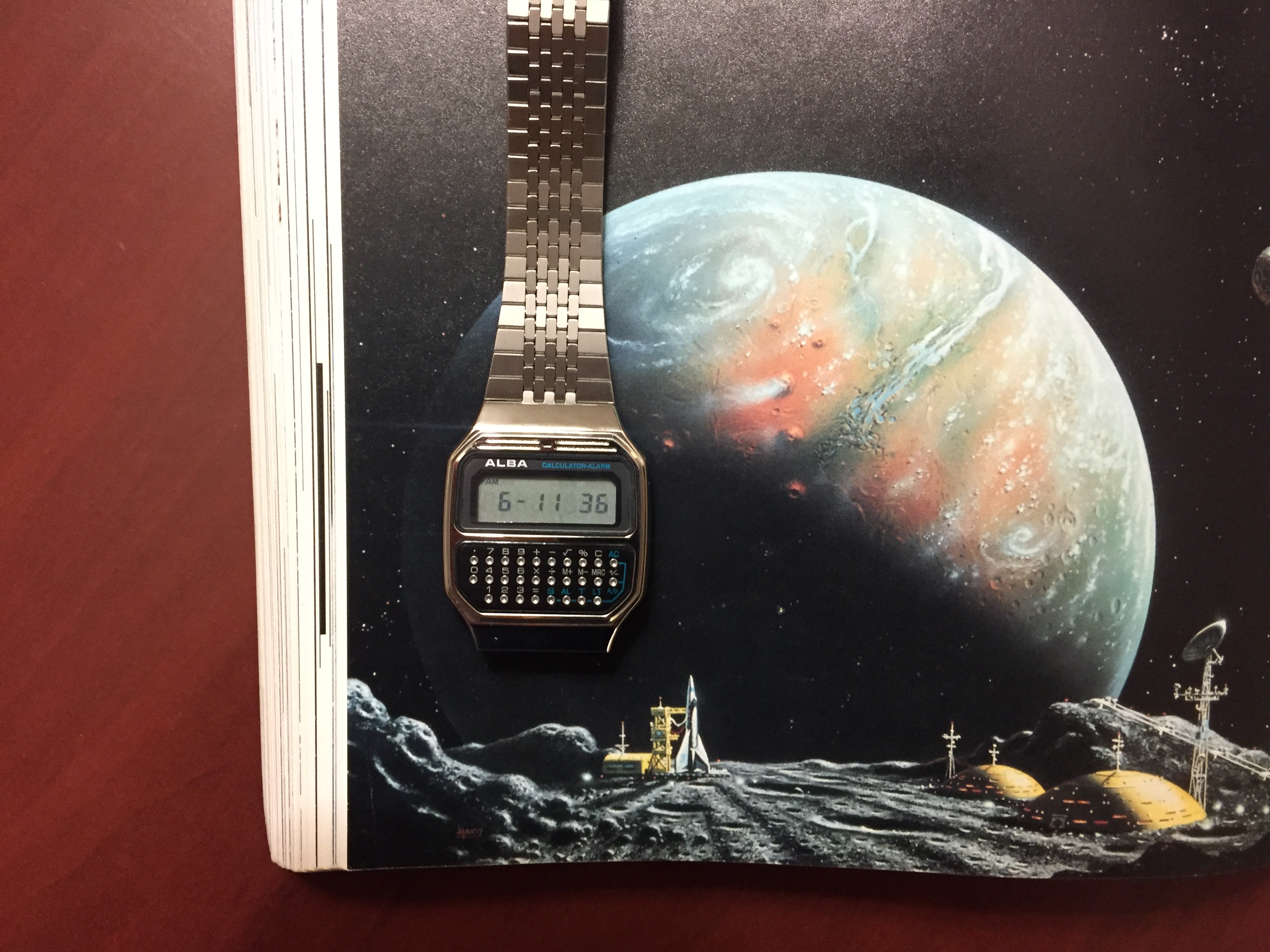 But if you think that simple multiply, divide, add, and subtraction watches are not enough for your needs then you should consider stepping up to a scientific calculator watch like the Casio CFX-200 shown below. Look at all of those buttons! 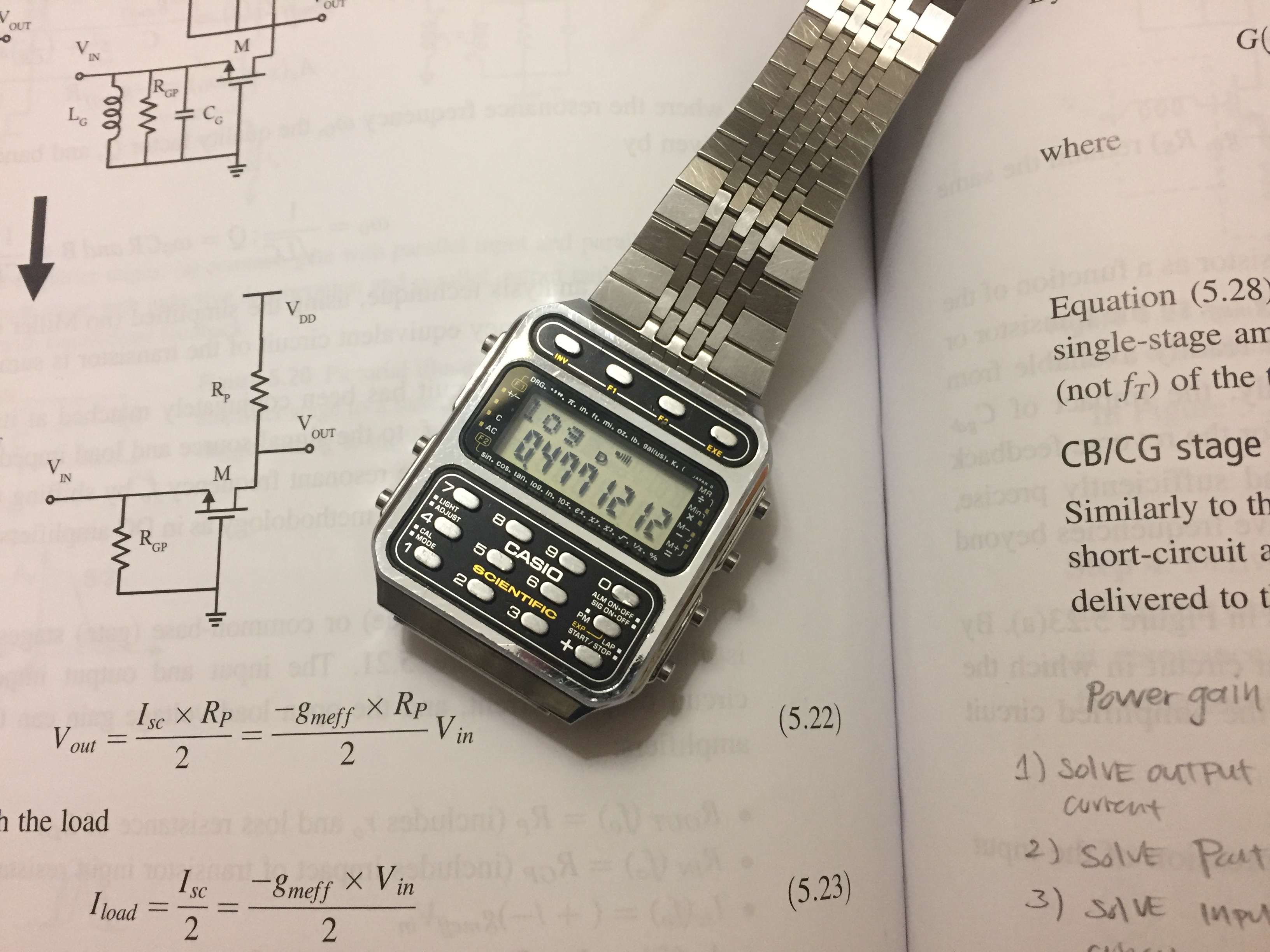 BASIC was the programming language of the 1980’s and if you wanted to run a BASIC program on your wrist there was only one way to do it; with a Seiko UC-2000 and 3000 series watches:

Every serious VDW collector must have one of these in her/his collection. The Seiko UC-2000 is still ahead of its time, not even the Apple watch can run BASIC programs yet.

King of VDW, the Ana-Digi

The king of all VDW is the Analog-Digital (so-called ‘Ana-Digi’). The Ana-Digi features both a digital display and an analog display on the same watch. The best part about it is that the analog display is electronically synchronized to the digital display, they both tick in unison! A technological tour-de-force of both digital and mechanical watchmaking.

The watch collecting and repair community has traditionally been focused on mechanical time pieces, but recently Tibi Fleseriu has generated a tremendous interest and following in VDW through his YouTube channel. Like many others in this growing hobby, I discovered the world of VDW through Tibi’s channel.

Tibi’s interest in VDW started at a young age,

What got me started in VDWs is that I’ve always been a watch guy but never into mechanical watches, I was into the likes of altimeter watches and compass watches so some nerdy electronic device in your watch “It tells time but also does this…”. I eventually wanted to add a digital watch in the collection but wasn’t pleased with today’s new products so I ended up in looking what was in the hay day of digital watches. And here I am 5 years later with an obsession :). Moreover I have always been into electronics especially early miniaturization technology.

She/He is a watch enthusiast foremost but he is not one to aspire to Rolexes, JLCs or Patke Phillippes
She/He does not aspire to what we call “haut horology” pieces

She/He usually has a side hobby or more involving vintage electronics, gaming or computing
She/He likes to tinker or at least knows a little more than changing a battery on a watch
She/He is a nerd whether we are talking watches or electronics
She/He had some part of his life in the 70s to 90s

Sound familiar? You have a home in the VDW community.

How to Repair a VDW

There is no way around it, sooner or later your watch will break or you will want a piece that requires repair to make it run.  Fortunately most VDW repairs are well within the abilities of the readers of Hackaday. As a reference, you will want to get a copy of The Digital Watch Repair Manual which is the best repair manual on repairing digital watches. Once you have familiarized yourself with how VDWs work I suggest you watch this video on how to service a common VDW, most VDW repairs are not even this involved:

Combine both traditional mechanical watchmaking skills and now you can repair an Ana-Digi as shown in this video. And here is how to repair the Sieko UC-2000 who’s most common problem is damage to the inductive communications coil used to load and read data to/from the watch.

Once you have found your VDW muse and are itching to buy one for your collection, here are my suggestions;

Buy a new one:

The easiest way to get into VDW is to buy a new one. Casio continues to manufacture numerous models unchanged since the 1980’s including the calculator watch CA53W, the ubiquitous F91W, the ‘Casino Royale’ and others. With a new watch you will not have to worry about getting it wet or doing repairs.

Get the experience of owning a new watch from the 1970’s. Millions of digital watches were manufactured and some of these were never sold. These watches were shelved, never to be uncovered again until the advent of online auction sites. Today you can find many examples of NOS VDW watches.

There’s nothing like the character of a used watch. As strange as it may sound, watch collectors like to leave the scratches on the case and the gouges in the crystal of their vintage pieces because it tells a story. In other words, the wear on your watch is akin to the wear on a good pair of jeans. So do not worry about the scratches and scuffs. A fully operational watch with wear is a desirable look these days.

The Future of VDW

The value of things vintage watch has skyrocketed in recent years.  I cannot even buy late 40’s Bulova movements without paying about 4x what I had 7 or 8 years ago. Similarly, digital watches are on the verge of mass-interest by the greater watch community. According to Tibi:

These gems are in finite numbers, they don’t make them anymore at least not the way they used to. Mechanical watches are still being produced today in many forms and prices but digital watches not so much…

For the first time as hackers and electrical engineers we can be at the forefront of fashion. Wearing a VDW is an achievement because you’re able to make it run again. It’s a statement as well as a conversation piece because nobody wears 1970’s and 80’s digital watches anymore. For these reasons and more let’s not forget to wear our digital watches.