The Watch Inspired By 2001: A Space Odyssey 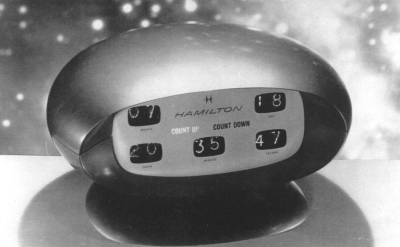 The next era of digital watches came in 1966 when Stanley Kubrick hired Hamilton Watch Company in Lancaster, Pennsylvania to make a futuristic clock for his upcoming movie, 2001: A Space Odyssey. The resulting clock was shaped like a squashed sphere and displayed time using digits from small Nixie tubes.

The clock never made it into the movie but it inspired its makers, John M. Bergey and Richard S. Walton, to work on a digital watch. They’d also worked together in Hamilton’s Military Division on an electronically timed fuse, technology which they’d thought about applying to watches and clocks.

Meanwhile, also in 1966, George H. Thiess founded a company in Texas called Electro/Data which produced solid-state microwave components and subsystems. Thiess had a dream of developing an accurate watch and devoted a small portion of the company’s resources to the project. After making a few prototype clocks as research for developing the watch, they hired Willie Crabtree from Texas Instruments to work on it as a project engineer and by 1969, had a prototype clock which used the new HP 5082-7000 LED module (PDF) for the digits.

By this time, Hamilton had also developed a digital clock but lacked the resources to scale it down to a watch. They contacted Electro/Data and by December 1969, the companies had an agreement to work on a digital watch together.

The watch they’d come up with was called Pulsar, named for the type of star which sweeps a beam of electromagnetic radiation across space at a precise rate of rotation.

By April 4th, 1972 they had a limited edition of 400 18-carat gold Pulsar watches selling for $2,100 — $12,500 in 2018 dollars. The watch used a quartz crystal for counting time and red LED’s for the display. To save power, the time was not always displayed. Instead, you’d press a button which would show the time for just over a second and if you continued to press, the display would change to show the seconds counting up.

However, there were problems with the 44-IC main computing module supplied by Electro/Data resulting in a recall. Eventually, Hamilton ended up making their own. There were also battery issues with the first watch, leading to the use of 2 specially made silver-oxide button cells, expected to last for a year of up to 25 readouts a day.

The state-of-the-art for LCDs in the 1960s required a constant current, a voltage which was too high for batteries, and a mirror which limited the viewing angle. All that changed in the early 1970s with the TN-effect (Twisted Nematic field effect) which requires low voltage, low power, and no mirror.

By 1972, four-digit watches using these new low-power LCDs hit the market, and six-digits followed from Seiko in 1973. Even Intel got involved through a watch company they’d bought called Microma. Unlike the more power-hungry LED watches, these LCD ones could be always on, though often pressing a button turned on a small light for reading the digits in the dark.

Casio and Texas Instruments entered the market, producing large quantities. In 1976, Texas Instruments sold 18 million alone and soon the price fell below $20. Eventually, TI introduced one with a plastic watchband for just $9.95. As you’d expect, numerous companies weren’t able to compete and either stopped producing digital watches or closed down.

It may surprise many to learn that smartwatches are not a new thing. The very first digital watch, the Pulsar, was thought of by its makers as a time computer and Hamilton’s subsidiary for making them was called Time Computer, Inc. They even released a limited edition 18 carat gold Pulsar with a built-in calculator selling for $3,500 with plans for a $600 stainless steel one. But it was in the 1980s that addons really hit the market.

Seiko came out with a TV watch. The TV display used a transflective LCD which worked with external light, the brighter the better. To watch TV, you plugged it into a receiver which fit in a pocket. The cable going to the headphones doubled as an antenna.

Casio produced a variety of watches with different features such as a built-in calculator, a thermometer, one with a 1,500-word dictionary for Japanese-to-English translation, and even one which could dial your home phone number. Citizen had one with voice control, and both Seiko and Timex released wristwatches which interfaced with computers.

But advancements in commercial digital watches had peaked. After this point most just told the time and date. That is until mobile phones came along.

Mobile phones have displayed the time ever since their early days, bringing on a brief era when many wrists went bare. As watches wore out or broke there was no need to buy new ones. Younger generations grew up with mobile phones and had never even worn watches, neither analog nor digital.

Only folks who’d worn them all their lives had watches, or as in my case, had one which cost more to repair than the watch itself but kept it going for sentimental reasons. It seemed for a while as though the watch would eventually die out altogether.

The Rebirth Of The Watch

While mobile phones, and especially in their modern form, the smartphone, seemingly killed the watch, they were also partly responsible for its rebirth as the modern smartwatch.

One reason for the rebirth is that to look at a text message which just arrived or to check the time on a smartphone, you have to pull it out of a pocket or pick it up off a table. In a meeting, it’s less conspicuous to just twist your wrist and glance at something there. On a bicycle, there’s no need to stop and haul out a phone to check if a text message requires attention when a quick glance at your wrist will do.

Another reason is that smartphones brought on advancements in technology which were also useful for watches. Those include more robust glass, better touchscreens, displays, and operating systems for small devices.

As with a lot of new products, a few modern smartwatches appeared but they didn’t really take off until the Pebble came along in 2012. Pebble raised a record $10.3 million on Kickstarter, showing that there was a sizeable market. It had a black and white ultra-low-power transflective LCD with a backlight, vibrator, accelerometer, and a battery life between four and seven days. There were over 1,000 apps on the pebble app store and it could communicate with a smartphone for that convenient glance to see why your smartphone is ringing. Unfortunately, the Pebble ceased production in 2016 when the company was bought by Fitbit for its IP.

Pebble’s success spurred on the introduction of many more smartwatches but the most notable was the Apple Watch in 2014, even though its main effect was arguably that it introduced more consumers to the market.

The jury’s still out on just how ubiquitous the smartwatch will become. For many, checking the time on a smartphone will remain the way while niches will continue to exist such as wrist-mounted health monitors. There does seem to be a resurgence in the number of people wearing analog watches, perhaps as the low tech alternative to hauling out a smartphone to check the time or because they’ve simply become fashionable again.

As someone who wore an analog watch for almost 50 years (except for the 70s when I wore a digital one), I stopped wearing my beloved Cardinal when the strap last broke and now use my smartphone when I’m away from the computer. Did you use a digital watch back in the day? Or perhaps you had one with a calculator? Or was a smartwatch your introduction to the digitized wrist? This being Hackaday, we’re of course expecting a few of the answers to be a DIY smartwatch, like this wooden one, or maybe a hacked Pebble.

94 thoughts on “Inventing The Digital Watch Again And Again And…”