There has been an argument raging for years over whether you should design circuit boards with 45-degree corners or 90-degree corners. Why make them with corners at all? This breathtaking circuit board art is from a digital watch circa 1975. 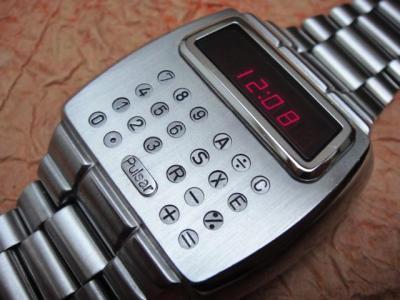 The Pulsar Calculator Watch was the first of its kind and came along with a stylus to operate the miniscule buttons. The circuit board traces would have been laid out by hand, explaining the gentle curves rather than straight lines. The chip-on-board construction is wild, with the silicon die bonded directly to those traces on multiple chips in this image. There is also a mercury tilt sensor on this model that would have switched the display off when not being held up to view the time (or calculate your tip at the Ritz).

We found working models of this watch for sale online for about $225-350. That’s a steal considering the original list price for these is reported to be $550 ($2600 considering inflation).

The beauty of the PCB artwork is hidden away, not just inside the watch case, but obscured by the plastic battery housing to which those tabs on the right are soldered. Think of how many geeks were lucky enough to have one of these and never realized the beauty within. If you’re looking to unlock more of these hidden masterpieces, check out [Greg Charvat’s] article on collecting and restoring digital wristwatches.

Like many of us, [Artistikk] is inspired by astronauts and space travel in general. To keep the inspiration coming, he made the Cosmo Clock — a sleek little clock that changes color whenever an astronaut is launched into space.

As awesome as space is, we’re inspired by the amount of Earth-saving reuse going on in this project. The actual time-telling is coming from a recycled wristwatch movement. [Artistikk] cut a bigger set of hands for it out of a plastic container, and used the lid from another container for the clock’s body.

The launch inquiries are handled by an ESP8266, which uses a Blynk app and some IFTTT magic to get notified whenever NASA yeets an astronaut into space. Then the ESP generates random RGB values and sends them to a single RGB LED. The clock body is small enough that a single LED is bright enough to light up all the parts that aren’t blacked out with thick paper. In case you’re wondering, the pattern around the edge isn’t random, it’s Morse code for ‘sky’, but you probably already knew that, right? Make a dash past the break to take the tour.

Clocks that wind up in space are much more complicated. Check out this tear-down of the clock from a late-90s Soyuz spacecraft.

END_OF_DOCUMENT_TOKEN_TO_BE_REPLACED

Sporting a new wristwatch to school for the first time is a great moment in a kid’s life. When it’s a custom digital-analog watch made by your dad, it’s another thing altogether.

As [Chris O’Riley] relates, the watch he built for his son [Vlad] started out as a simple timer for daily toothbrushing, a chore to which any busy lad pays short shrift unless given the proper incentive. That morphed into an idea for a general purpose analog timepiece with LEDs taking the place of hands. [Chris] decided that five-minute resolution was enough for a nine-year-old, which greatly reduced the number of LEDs needed. An ATtiny841 tells a 28-channel I2C driver which LEDs to light up, and an RTC chip keeps [Vlad] on schedule. The beautiful PCB lives inside a CNC machined aluminum case; we actually commented to [Chris] that the acrylic prototype looked great by itself, but [Vlad] wanted metal. The watch has no external buttons; rather, the slightly flexible polycarbonate crystal bears against a PCB-mounted pushbutton to control functions.

With a snappy wristband, [Vlad] will be rolling fancy on the schoolyard. It’s a great looking piece that needed a wide range of skills to execute, as all watches do. Check out some other watch builds, like this lovely pure analog, another digital-analog hybrid, or this pocket watch that packs an Enigma machine inside.

END_OF_DOCUMENT_TOKEN_TO_BE_REPLACED

Sometimes silence is the best compliment to a DIY project, and that doesn’t just apply to homemade lockjaw toffee. When a watch is so well-made that it looks like one from a jewelry store, it is easy to keep quiet. [ColinMerkel] took many pictures of his fourth wristwatch attempt but “attempt” is his word because we call this a success. This time around he didn’t forget the crown for adjusting the time so all the pieces were in place.

His second “attempt” at wristwatch making was featured here and it had a classical elegance. Here, the proverbial game has been stepped up. Instead of using stock steel, the body is constructed of 303 stainless steel. The watch dial will definitely draw compliments if its DIY nature is revealed, which is equally mathematical and charming. Pictures of this process were enough to convey the build without words which is always a bonus if you only want a quick look or English isn’t your first choice for language.

Not only is [Colin] an upstanding horologist, he has a reputation with aftermarket door security and a looping guitar pedal.