Because encryption doesn’t work if your keys are just sitting out in the open, system designers have come up with ingenious solutions to prevent evil hackers form accessing these keys. One of the best solutions is the hardware enclave, a tiny bit of silicon that protects keys and other bits of information. Apple has an entire line of chips, Intel has hardware extensions, and all of these are black box solutions. They do work, but we have no idea if there are any vulnerabilities. If you can’t study it, it’s just an article of faith that these hardware enclaves will keep working.

Now, there might be another option. RISC-V researchers are busy creating an Open Source hardware enclave. This is an Open Source project to build secure hardware enclaves to store cryptographic keys and other secret information, and they’re doing it in a way that can be accessed and studied. Trust but verify, yes, and that’s why this is the most innovative hardware development in the last decade.

What is an enclave?

Although as a somewhat new technology, processor enclaves have been around for ages. The first one to reach the public consciousness would be the Secure Enclave Processor (SEP) found in the iPhone 5S. This generation of iPhone introduced several important technological advancements, including Touch ID, the innovative and revolutionary M7 motion coprocessor, and the SEP security coprocessor itself. The iPhone 5S was a technological milestone, and the new at the time SEP stored fingerprint data and cryptographic keys beyond the reach of the actual SOC found in the iPhone.

The iPhone 5S SEP was designed to perform secure services for the rest of the SOC, primarily relating to the Touch ID functionality. Apple’s revolutionary use of a secure enclave processor was extended with the 2016 release of the Touch Bar MacBook Pro and the use of the Apple T1 chip. The T1 chip was again used for TouchID functionality, and demonstrates that Apple is the king of vertical integration.

But Apple isn’t the only company working on secure enclaves for their computing products. Intel has developed the SGX extension which allows for hardware-assisted security enclaves. These enclaves give developers the ability to hide cryptographic keys and the components for digital rights management inside a hardware-protected bit of silicon. AMD, too, has hardware enclaves with the Secure Encrypted Virtualization (SEV). ARM has Trusted Execution environments. While the Intel, AMD, and ARM enclaves are bits of silicon on other bits of silicon — distinct from Apple’s approach of putting a hardware enclave on an entirely new chip — the idea remains the same. You want to put secure stuff in secure environments, and enclaves allow you to do that.

Unfortunately, these hardware enclaves are black boxes, and while they do provide a small attack surface, there are problems. AMD’s SEV is already known to have serious security weaknesses, and it is believed SEV does not offer protection from malicious hypervisors, only from accidental hypervisor vulnerabilities. Intel’s Management engine, while not explicitly a hardware enclave, has been shown to be vulnerable to attack. The problem is that these hardware enclaves are black boxes, and security through obscurity does not work at all.

At last week’s RISC-V Summit, researchers at UC Berkeley released their plans for the Keystone Enclave, an Open Source secure enclave based on the RISC-V (PDF). Keystone is a project to build a Trusted Execution Environment (TEE) with secure hardware enclaves based on the RISC-V architecture, the same architecture that’s going into completely Open Source microcontrollers and (soon) Systems on a Chip. 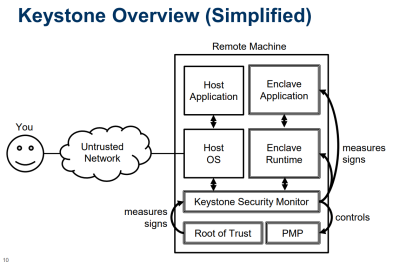 The goals of the Keystone project are to build a chain of trust, starting from a silicon Root of Trust stored in tamper-proof hardware. this leads to a Zeroth-stage bootloader and a tamper-proof platform key store. Defining a hardware Root of Trust (RoT) is exceptionally difficult; you can always decapsulate silicon, you can always perform some sort of analysis on a chip to extract keys, and if your supply chain isn’t managed well, you have no idea if the chip you’re basing your RoT on is actually the chip in your computer. However, by using RISC-V and its Open Source HDL, this RoT can at least be studied, unlike the black box solutions from Intel, AMD, and ARM vendors.

The current plans for Keystone include memory isolation, an open framework for building on top of this security enclave, and a minimal but Open Source solution for a security enclave. 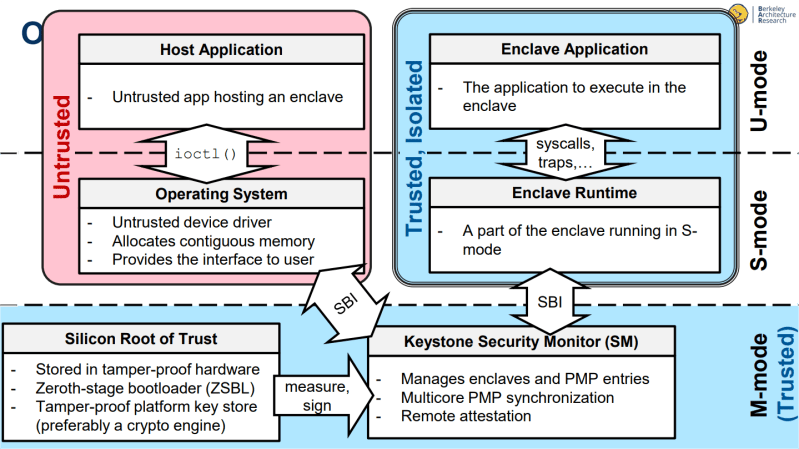 Right now, the Keystone Enclave is testable on various platforms, including QEMU, FireSim, and on real hardware with the SiFive Unleashed. There’s still much work to do, from formal verification to building out the software stack, libraries, and adding hardware extensions.

This is a game changer for security. Silicon vendors and designers have been shoehorning in hardware enclaves into processors for nearly a decade now, and Apple has gone so far as to create their own enclave chips. All of these solutions are black boxes, and there is no third-party verification that these designs are inherently correct. The RISC-V project is different, and the Keystone Enclave is the best chance we have for creating a truly Open hardware enclave that can be studied and verified independently.