[Mark Rober] was fed up with packages going missing. He kept receiving notifications that his shipments had been delivered, but when checking his porch he found nothing there. Reviewing the CCTV footage revealed random passers-by sidling up to his porch and stealing his parcels. It was time to strike back. Over six months, [Mark] and his friends painstakingly designed, prototyped and iterated the perfect trap for package thieves, resulting in a small unit disguised as an Apple HomePod. The whole scheme is wonderfully over-engineered and we love it. 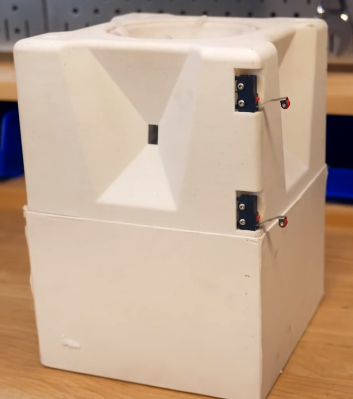 The main feature of the device is a spinning cup on the top which contains a large amount of glitter. When activated, it ejects glitter in every directions. You could say it’s harmless, as it’s just glitter. But then again, glitter has a way of staying with you for the rest of your life — turning up at the least expected times. It certainly leaves an emotional impression.

Activation is quite clever; the fake package sits on the porch until an accelerometer detects movement. At that point, GPS checks to see if the package has traveled outside a geo-fence around [Mark]’s house. A signal is then sent to the four smartphones to start recording — yes, that’s right, there are 4 phones inside, one on each side to capture the reaction of the thief.

How can [Mark] be so confident that he’ll be able to recover the four phones and their footage? That’s answered by GPS tracking and a can of fart spray actuated by a 3D printed cam and DC motor, ensuring the thief won’t want this package around for long. This actuator and the glitter motor are controlled by a custom PCB, which also triggers the phones to start recording through their headphone jacks and detects the opening of the package with some microswitches. This is truly a masterpiece that outsmarts the package thieves in a way that leaves an impression while still being playful.

(Editor’s Note 2: On 12/20/18 it was announced that two of the five thieves shown in the originally video were staged, apparently without [Mark Rober’s] knowledge. Here is his statement on the matter.)

(Editor’s Note 1: [Sean Hodgins] wrote in with bonus video on how the Glitter Bomb works and how it was made.)

If booby traps are your thing, we’ve got you covered. Check out this ticking bomb style puzzle, or this crate challenge which is rigged to blow.

158 thoughts on “Hacker Makes A Flawless Booby Trap, Strikes Back Against Package Thieves”