The WS2812 and WS2812B LED has four pins: power, ground, data in, and data out. The idea is to feed a string of these LEDs some power, send data in, and the LEDs will light up. The WS2812 and WS2812B are nearly identical, with the ~B version having reverse current protection, just in case you forget red is positive and black is negative. It’s pretty simple for a 4-pin device.

One downside of the WS2812 is that when they’re wired in serial, if one goes down, the rest of the string goes down. Sure, the failure rate might only be a quarter of one percent in the worst case, but we’ve seen strings with hundreds of WS2812s hanging off of it. This sort of reliability is not something you want when you’re dealing with hundreds or thousands of a thing.

The WS2813 is the solution to one LED bringing down the rest of the string. There are six pins in this package, and two data signals. There are integrated caps for simplifying the layout, and the refresh frequency can reach up to 2 kHz. Basically, if you’re doing something with WS2812s, do it with WS2813s instead. This is especially true if you’re putting these RGB LEDs through a reflow oven, just trust me on this. 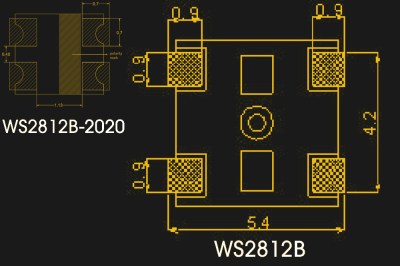 While the WS2812B, 2813, and associated LEDs are great for adding blinky, there’s only so much you can do with a large, 5 mm x 5 mm square package. For some applications, pixel pitch is important, and if you’ve ever seen a high density LED matrix made with small LEDs, you’ll know what I’m talking about. Just look at the screen that’s displaying this text.

What if there were an individaully addressable RGB LED that were smaller? That’s where the WS2812B-2020 comes in. Instead of 5 mm square, it’s 2 mm square. How big of a difference does that make? Check out the graphic to the right. That’s the footprint for a regular 2812B and a 2020-sized version, scaled to the correct relative dimensions. You can fit four of them in the footprint of a WS2182.

While the WS2812 plays well with five volts, ohm’s law is a thing and RGB LEDs draw a lot of current. It would be nice if there were an individually addressable RGB LED that worked with higher voltages. It’s like how electric kettles aren’t a thing with 120 V mains power. Sometimes more voltage is better.

As much as we enjoy shouting “WorldSemi” as often and as loudly as possible, there are other manufacturers of serially addressable LEDs, and some of these chips have some interesting features.

I’d like to tell you a story about why engineers and marketers should never mix. A few years ago, an engineer at Sharp was reading the relevant literature on wide color gamut displays and discovered a vast amount of research into producing more vivid colors. The literature said there was a deficiency in traditional RGB color spaces, and the human eye is incredibly sensitive to green. If you want to create a display with a wide color gamut, you need to make a display with four colors: red, green, blue, and what’s best described as ’emerald’. The emerald is deeper, and not as ‘neon’ as a traditional green sub-pixel on an LCD TV.

An executive at Sharp ran with the idea until a marketer stepped in and said that nobody can sell two greens. What would you call it, “other green”. The engineer went back to the drawing board, crossed out ’emerald’, and wrote in ‘yellow’. This was Sharp’s Quattron technology, found in their Aquos line of TVs, and yes, each pixel had four subpixels: red, green, blue, and yellow. There were ads starring the captain of the Excelsior. Yes, there was a television ad (that you would watch on a TV) showing off the capabilities of a television with a wider color gamut enabled by a fourth primary color in the display. It’s around this time that your mind undergoes liquefaction under the intense pressure of attempting to comprehend reality. Don’t worry, the feeling won’t pass, but you do get used to it.

The APA-109B is the solution to trying to display white with red, green, and blue LEDs. If you’ve ever tried to put white on a panel of WS2812s, you’ll notice it isn’t quite right. It’s an electric Monet, with visible pastels swirling about, or at least that’s what it looks like when you’re staring into five hundred watts of RGB LEDs. The APA-109B adds a fourth LED in a 5 mm package, in this case a white LED. It takes up literally half the package, but if you need a white serially addressable LED, this is the one you go for.