We’ve seen more projects based on books, TV shows, movies, and video games than we could ever hope to count. Hackers and makers derive inspiration from what they see around them, and it turns out there’s considerable overlap between the folks who sit in their labs building stuff all day and the ones who spend their free time playing games or watching movies. Big surprise, right? But among them, few can match the influence of the Fallout franchise. 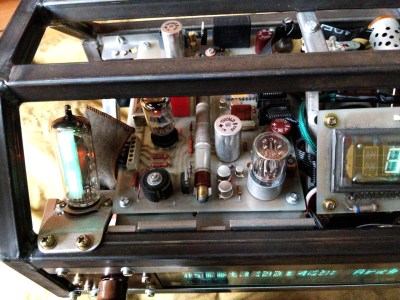 As the latest entry in a long line of incredible Fallout-inspired builds, we present the Octoglow VFD by [Michał Słomkowski]. While this build isn’t trying to replicate anything directly from the games, it captures all the hallmarks that make up the game’s distinctive post-apocalyptic chic : antiquated vintage components, exposed internals, and above all, a dirty, industrial look. It’s supposed to look like somebody built the stuff out of parts they found in the trash, primarily because that’s exactly what they would’ve needed to do.

So what is it? Well, that’s a little hard to nail down. Frankly we’d say it’s a little more like art than anything, but it does have some useful functions. Currently it shows the time, date, weather information, and various RSS feeds on its dual vacuum fluorescent displays. There’s also a real-life Geiger-Müller counter onboard, because what says Fallout more than a little radiation?

The build itself is absolutely fascinating, and [Michał] leaves no stone unturned in his comprehensive write-up. Every module of the Octoglow has its own page on his site, and each one is bristling with hardware details, schematics, and firmware documentation. Reading along you’ll run into all sorts of interesting side notes: like how he reverse engineered a wireless temperature sensor with his sound card, or devised his own ten-pin bus to interconnect all the modules.

If the Octoglow doesn’t quite scratch that Vault-Tec itch, there’s plenty more where that came from. How about this replica of the wall terminals from Fallout 4, or this radiation monitor perfect for roaming the wastelands? Don’t forget to bring along this 3D printed Thirst Zapper for protection.

9 thoughts on “Fallout Inspired Display Is Ready For The Apocalypse”