It may be hard to believe, but thanks to the expert work of Nintendo aficionado [Bill Paxton], the Game Boy Advance SP and GameCube lovechild that you see before you started its life as a Wii. That means not only can it play commercial GameCube and Wii games, but also has access to the wide library of homebrew games and emulators available for those systems. 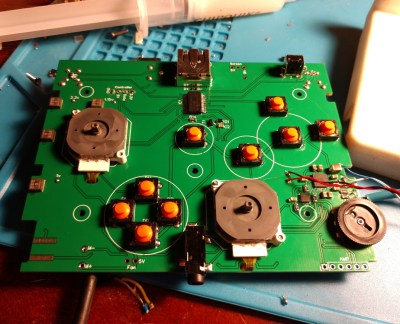 To create this marvel, [Bill] first had to expertly cut away extraneous components from the Wii’s motherboard. He then mated the “trimmed” PCB to a new board that holds the controls as well as some other ancillary components such as the audio amplifier and USB port. He even managed to squeeze a battery in there, as demonstrated in the video after the break.

Finally, he designed a 3D printed enclosure that incorporates GameCube-style controls (complete with printed buttons) into the classic clamshell Game Boy SP shape. Because of the complexity of the design, [Bill] decided to have it professionally printed at Shapeways rather than trying to run it off of his home printer, which he says helps sells the professional look. It did take him some trial and error before he got the hang of painting the printed material to his satisfaction, but we think the end result was certainly worth the effort.

It probably won’t come as a huge surprise to find that this isn’t the first time [Bill] has pulled off a stunt like this. A few years back he created a very similar “GameCube SP”, but by the looks of it, this revised attempt improves on the original version in every way possible.

3 thoughts on “A Wii Playing The GameCube, Disguised As A Game Boy SP”