Certainly the smallest of the currently operational spacecraft, Chipsats (also known as Sprites) are the product of a Kickstarter from 2011. The idea was to create an extremely simplistic free-flying satellite that could be packed by the hundreds into a dispenser which itself would travel to space as ridesharing payload. To reduce cost and mass, the craft wouldn’t bother with any sort of physical radiation shielding, or even a rigid frame for that matter. As the name implies, they would literally be bare PCBs with exposed chips on them. They wouldn’t last long, and some might not even survive the deployment, but when you’re releasing 100 of them at a shot you can afford to lose a couple.

Each Chipsat weighed less than 4 g, and measured 3.6 cm a side. Being essentially prototypes, they carried only the bare essential electronics: small photovoltaic panels for energy production, a Texas Instruments CC430F513X microcontroller with integrated RF transceiver running at 437 MHz, and a LSM9DS1 three axis accelerometer. Even batteries were considered a luxury; the Chipsats would only be able to operate when exposed to direct sunlight. The upside of this rather spartan Bill of Materials meant that each Chipsat could be manufactured for less than $100, even when using space-rated components.

Prototype Chipsats spent three years exposed to the space environment as part of the eighth Materials International Space Station Experiment (MISSE), which proved the design was more than robust enough to survive the short mission durations planned for them. In April 2014 the first operational Chipsat mission, known as KickSat, was released from the ISS. Unfortunately, due to a glitch in the KickSat “mothership”, the individual Chipsats failed to deploy.

The second attempt, KickSat-2, was deployed from the free-flying Cygnus SS John Glenn after it completed its cargo mission to the ISS in February of 2019. After spending a few weeks in orbit, KickSat-2 successfully deployed 105 Chipsats, setting a record for the highest number of satellites ever released simultaneously. Before reentering the Earth’s atmosphere just days later, ground stations were able to pick up signals from the individual Chipsats and verify they were operating as expected. Now that they’ve proved viable in low Earth orbit, NASA believes Chipsats could be deployed to nearby asteroids or even Mars in the future.

A Swarm of SpaceBEEs

Taking a considerably less minimalistic approach to small satellite design is the SpaceBEE from Swarm Technologies. With dimensions of 100 mm x 100 mm x 25 mm, these craft are quite a bit larger than the Chipsat, though still around 1/4 the size of the smallest CubeSat. They are intended to provide global low-bandwidth connectivity for sensors or devices that might otherwise not be able to get onto the Internet. 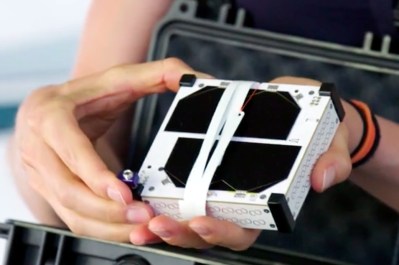 Interestingly, the size of the SpaceBEEs has become something of a stumbling block. They’re in the awkward situation of being large enough that they could potentially pose a danger to other spacecraft, but also small enough that it makes tracking them difficult. To help combat this, the sides of the SpaceBEE are covered with an experimental passive radar reflective material developed by the U.S. Space and Naval Warfare Systems Command. The material reportedly makes the sandwich-sized craft appear up to ten times as large on ground based radar.

Unfortunately, the Federal Communications Commission wasn’t convinced and rejected the application to launch and operate the SpaceBEEs. Incredibly, Swarm Technologies disregarded the FCC’s decision, and launched four SpaceBEE satellites in January of 2018 by way of an Indian rocket. The unauthorized launch earned the company a $900,000 fine and increased FCC oversight for the next three years.

Concerns over the radar visibility of the SpaceBEE prompted the decision to up-size the next four satellites in the constellation to a more traditional 1U CubeSat form factor, but it’s unclear if that was a stopgap measure due to the FCC’s concerns or the company’s new long-term plan for the constellation.

The major downside of designs like the Chipsat or SpaceBEE, officially referred to as femtosatellites, is that their size makes it difficult to equip them with much of the hardware you’d expect in a traditional free-flying spacecraft. For example, a propulsion system. While the SpaceBEE does have the ability to rotate itself into a high drag orientation that allows for rudimentary orbital adjustments, the Chipsat is essentially just along for the ride. On short missions in Earth orbit the lack of propulsion isn’t that big of a deal, but for spacecraft like these to have a chance at doing real science far from home, they’ll need to be able to move around.

While the small size and low mass of femtosatellites means the classic bipropellant rocket engine is a nonstarter, those same traits do open up some interesting possibilities. As part of the ambitious Breakthrough Initiatives project, an attempt to search for and ultimately communicate with extraterrestrial life, several novel propulsion schemes have been proposed for gram-scale interstellar probes.

This hypothetical probe, called StarChip, would make use of photonic propulsion such as a solar sail and laser thrusters; concepts that would be far more difficult to realize with a larger craft. Today such technology is, at best, in the early stages of development. But thanks to this new era of micro spacecraft, engineers will be able to test and develop these concepts in real-world situations far faster and cheaper than was ever possible before.

12 thoughts on “The Future Of Space Is Tiny”