Have you looked up into the night sky recently and seen a bizarre line of luminous dots? Have you noticed an uptick in the number of UFO reports mentioned in the news and social media? If so, you may have already been touched by what many have come to affectionately call Elon Musk’s “Space Train”: a line of tightly grouped Starlink satellites that are making their way around the globe.

Some have wondered what’s so unique about the Starlink satellites that allows them to be visible from the ground by the naked eye, but that’s actually nothing new. It’s all about being in the right place at the right time, for both the observer and the spacecraft in question. The trick is having the object in space catch the light from the Sun when it has, from the observer’s point of view, already set. It’s essentially the same reason the Moon shines at night, but on a far smaller scale.

The phenomena is known as “satellite flare”, and chasing them is a favorite pastime of avid sky watchers. If you know when and where to look on a clear night, you can easily spot the International Space Station as it zips across the sky thanks to this principle. NASA even offers a service which uses email or SMS to tell you when the ISS should be visible from your location.

What makes the Starlink satellites unique isn’t that we can see them from the ground, but that there’s so many of them flying in a straight line. The initial launch released 60 satellites in a far tighter formation than we’ve ever seen before; Elon even warned that collisions between the individual Starlink satellites wasn’t out of the realm of possibility. The cumulative effect of these close proximity satellite flares is a bit startling, and understandably has people concerned about what the night sky might look like when all 12,000 Starlink satellites are in orbit.

The good news is, the effect is only temporary. As the satellites spread out and begin individual maneuvers, that long line in the sky will fade away. But before Elon’s “Space Train” departs for good, let’s look at how it was created, and how you can still catch a glimpse of this unique phenomena.

As a general rule, satellites are ejected from their carrier rocket with some degree of force so they’ll keep a safe distance from each other. To keep complexity down and reliability up, this mechanism in many cases is nothing more exotic than a large spring which can be released remotely. Even this slight nudge is enough to make sure the gap between the objects continues to widen, as they move through their now separate (though still very similar) orbits.

But the Starlink launch was unique in that no powered ejection system was used. Instead, the satellites were allowed to drift away from the second stage of the Falcon 9 propelled by nothing more than simple physics. Not only was this cheaper and easier than creating an ejection system for 60 satellites, but keeping them close together at release also simplifies the orbital maneuvers necessary to move them into their final orbits.

So how was this accomplished? We can get our first clue by taking a close look at SpaceX’s live mission coverage. Before the satellites are deployed, the movement of the Sun and Earth in the background shows the second stage of the Falcon 9 was in a flat spin. If you’ve ever watched the live coverage of previous SpaceX launches, or really any launch for that matter, you’ll know how unusual this is.

Normally the launch vehicle would be stabilized so that the only momentum imparted on the payload is that of the ejection force. But here, SpaceX intentionally spun up the second stage of the vehicle so that when the satellites were released they would essentially be “thrown” by centrifugal force. Talking about the deployment in a pre-launch press conference, Elon Musk said it “will seem like spreading a deck of cards on a table.”

To help visualize this, we can recreate the deployment on a smaller scale with everyone’s favorite rocket simulator, Kerbal Space Program:

Seen from this perspective, it’s clear how the “Space Train” was initially formed by this unusual method of satellite deployment.

See Them Before They’re Gone

If that was the end of the story, we could expect to see a relatively tight line of Starlink satellites in the sky for quite some time. But these satellites have a job to do, and their own individual propulsion systems. Once the inertia imparted on them by the Falcon 9’s rotation gave them a bit of breathing room, they were able to activate their thrusters and begin making the maneuvers necessary to put them into their final orbits.

As you read this, the “Train” is breaking up. The low-thrust ion engines used by the Starlink satellites mean that their separation won’t happen overnight, but every day that passes puts more distance between this once extremely tight-knit group. Nobody outside of SpaceX knows exactly how long this process will take, but a few weeks is probably not an unreasonable estimate given the motion we’ve already seen since launch.

That means there’s still some time to see them for yourself. The website N2YO is currently tracking the mass of Starlink satellites and will generate a list of dates and times where they should be visible from your location. Keep in mind that as these satellites are actively maneuvering, the exact time they make their pass could vary slightly from these calculations. For best results, get your eyes adjusted to the dark and start start looking a few minutes before the predicted pass.

Logically, one could assume that a similar “Space Train” should be visible for the first couple of weeks after each new batch of Starlink satellites is launched. So even if you end up missing this one due to cloud cover or the fact you don’t want to get up before dawn, there should still be literally hundreds of opportunities to do so in the next few years. 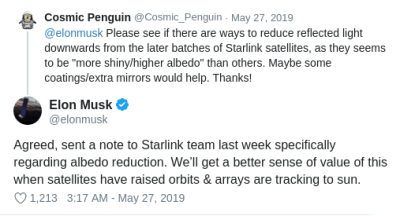 But we already know these satellites were only a step above the prototype stage, and that SpaceX anticipates they will go through several design changes before they really start ramping up production. Elon has also commented that he’s directed the Starlink team to look at ways of reducing the reflectivity of the satellites. It’s possible that hardware tweaks to the next batch of satellites to get launched reduces or eliminates the flare effect entirely.

Whether or not the next generations of Starlink satellites manage to eliminate the post-launch “Space Train” effect, one thing is certain: there’s no reason to worry that the night sky of the future will be criss-crossed with illuminated dotted lines. Once all of the maneuvers are complete and they’ve been deposited in their final orbits, the Starlink satellites will be no more visible in the night sky than the thousands that are already whizzing around overhead.

Images of Starlink satellites in orbit taken from a video posted to YouTube by Movie Vertigo.