High resolution digital cameras are built into half of the devices we own (whether we want them or not), so why is it still so hard to find good pictures of all the incredible projects our readers are working on? In the recently concluded Beautiful Hardware Contest, we challenged you to take your project photography to the next level. Rather than being an afterthought, this time the pictures would take center stage. Ranging from creative images of personal projects to new ways of looking at existing pieces of hardware, the 100+ entries we received for this contest proved that there’s more beauty in a hacker’s parts bin than most of them probably realize.

As always, it was a struggle to narrow down all the fantastic entries to just a handful of winners. But without further adieu, let’s take a look at the photos that we think truly blurred the line between workbench and work of art:

If you ever needed a reminder that beauty is all around you, look no further than the work Evilmonkeyz has done with these CRM200 MEMS gyroscopes. With the lids removed, the intricate internal features of these tiny gadgets become visible under the microscope. Most people have a MEMS gyroscope or two in their pocket courtesy of the modern smartphone, but even counting the technologically enthralled readers of Hackaday, we wager the vast majority have never seen the three dimensional nature of the device when viewed from an angle like this.

Evilmonkeyz says it only took a few minutes of manual labor with 400 grit sandpaper to ablate the encapsulation on these chips and uncover the incredible world underneath; something to keep in mind if you’re considering your own microscopic exploration. We also appreciate the fact that he gave the viewer some scale by stacking four of the CRM200s on a 100 yen coin in honor of their Japanese heritage.

If Alpha 1 Zero hadn’t included the “candid” shot of this incredible science-fiction skyline that showed the Arduino and tangle of wires that power it, we would have had a hard time believing it wasn’t computer-generated. Reminiscent of the misty, neon-drenched, cyberpunk worlds of Blade Runner or Altered Carbon, this electronic metropolis was created entirely from custom PCBs and addressable RGB LEDs. 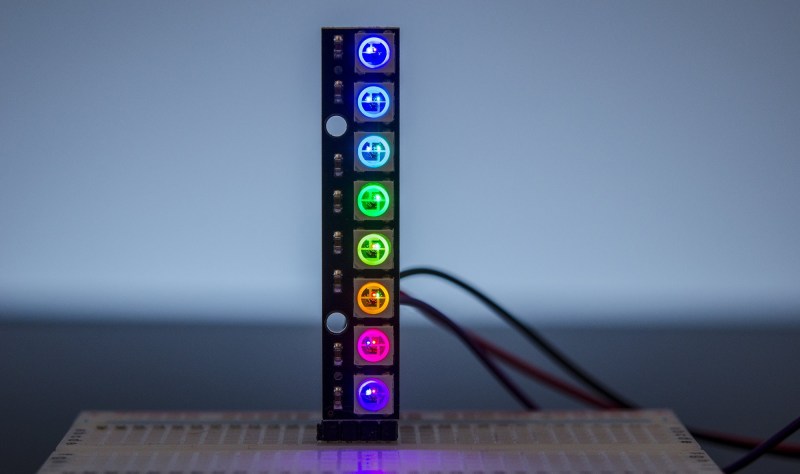 There’s an undeniable beauty in simplicity, and that principle is in ample display with Pixel Republic by ACROBOTIC Industries. On the surface, it seems little more than an admittedly well-framed photograph of a column of RGB LEDs doing what they’re designed to do. But upon closer examination, you realize that the photographer has captured the individual colored emitters glowing; clearly illustrating how one little device is able to generate so many colors.

Still, the name Pixel Republic hints at a deeper meaning. Is this the national flag of some hitherto unknown digital domain? Or perhaps its display of rainbow colors is meant to signify the creative diversity of the hacker culture? Pondering the true meaning, if any, remains an exercise for the reader.

There were so many fantastic entries into the Beautiful Hardware Contest that we couldn’t announce these winners without also calling out a few Honorable Mentions:

This contest challenged hackers to step a bit outside of their comfort zone, but we think the results speak for themselves. If you’re looking to take your project documentation to new heights, a stroll through the complete list of entries should provide plenty of inspiration.