The new power plants are produced by Siemens and use “aeroderivitave” gas turbines for power production. Aeroderivitave turbines are, like the name suggests, based on aircraft technology and are very similar to a jet engine. The high quality of materials and high tolerances in the aviation world are put to use making power rather than pushing airplanes. They are also more reliable than other types of generators, like diesel piston generators, because they have comparatively few moving parts. Typically, gas turbines like this are used for peaking power production rather than base load, such as the afternoon in the summer time when air conditioners are running. They can be turned off and on quickly, unlike base load plants like nuclear or combined cycle turbines. And these also float, which comes with advantages like being semi-moble and not taking up valuable real estate in the city.

Another benefit of this specific FPP is that it helps to modernize New York’s generation capabilities. The old plant used several turbines that burned fuel oil. This fuel type has fallen out of favor recently as the price of natural gas has plummeted with the rise of hydraulic fracturing. Natural gas is also reported to be cleaner and more efficient than fuel oil, easing a small amount of environmental concerns associated with burning fossil fuels. 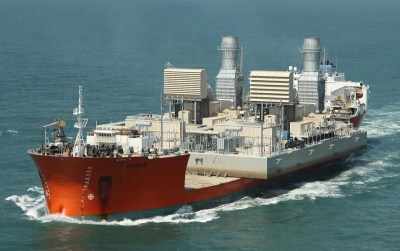 Not all floating power plants float, either. Some companies are offering similar plants, based on water, but are actually built on permanent piers rather than barges. Waller Marine builds jack-up plants (in addition to several other designs of FPP) like this which also facilitate liquid natural gas (LNG) tankers offloading their fuel to ports without the need for pipelines or large land-based storage facilities. If LNG is the preferred fuel over natural gas, this is a much more efficient way to deal with the tankers that are involved in delivering this type of fuel.

Some other ideas for delivering more power to urban areas have been floated as well, but the logistical concerns have kept them from holding water. Offshore power plants have been proposed but, aside from wind farms, haven’t been built because of the difficulty of transporting the power via undersea cables, maintaining the plant, and several other considerations. These problems seem to be mostly economical, however, and make sense for wind generation, but for fossil fuel or nuclear plants the solution seems to be to locate the plants on barges close to shore rather than further out to sea to make the logistics easier. The power transmission lines can simply be attached to the ship from land, with enough slack to allow for the tides, and some of the FPPs actually include step-up transformers to tie directly into the land-based electric grid. Undersea cables are incredibly expensive compared to overhead lines, and the other benefits of barge-based plants outweigh offshore generation capabilities in most cases.

Floating Power Plants On the Move

Of course, these FPPs in New York aren’t the only ones in the world. Large FPPs are also active in India, Venezeula, and many other coastal cities. They also weren’t the first floating power generating facilities, either. The SS Jacona was built in the early 1900s and then converted to a mobile power plant to help provide power to a local utility in Maine after a blizzard knocked out much of the transmission infrastructure in the area. It was then commissioned for various purposes during World War 2. The first nuclear-powered power ship was built in the 1960s and commissioned for use at the Panama Canal where it provided 10 MW of electricity during the late 60s and into the 70s. It became an invaluable resource when a water shortage prevented a hydroelectric dam on part of the canal from operating, and allowed boats to traverse the canal lock system without a decrease in the amount of electricity available to the surrounding areas.

While it’s feasible that any nuclear-powered vessel, like an aircraft carrier or a submarine, could be used in a pinch as a floating power plant, some purpose-built nuclear-powered FPPs are still being constructed today, mostly by Russia to provide power and heat to cities that are hard to reach by land. The Akademik Lomonosov floating nuclear power plant was constructed last year and was sent to Pevek, a small port town in extreme northeastern Russia. Shipping all of the materials over rail and building the plant on land would have been too difficult comparatively because of the extreme size of Russia, so this was a preferred option. Some express valid concerns over having a nuclear power plant in the ocean, and there have been nuclear accidents in the ocean in the past, but hopefully the engineers and designers of the plants have mitigated the risks the best that they can.

More Floating Power on the Horizon

It seems as though the construction of these plants, both nuclear- and fossil fuel-powered, will increase as the demand for energy rises especially in developing countries with access to large ports. Even some of the downsides of building these types of plants may turn out to be advantages in the long run, such as having to deal with hurricanes and typhoons. As long as they can be moved relatively quickly, they could be taken out of the path of the storm and then brought back in, while a land-based plant may suffer more severe damage. Rising sea levels as a result of global warming will also present challenges to coastal cities in the future, but power barges and FPPs will be immune to these risks as long as the surrounding power grid infrastructure is available. For certain, expect to see more of these units in the future.

62 thoughts on “Floating Power Plants; The Coastal City Solution Sure To Be Increasingly Popular”