Power is the bane of drone pilots. You’d like to fly longer which means a bigger battery. But a bigger battery will weigh more which leads to less flight time. You have to strike a balance and for most consumer drones that balance is about 20 minutes of flight time, more or less. Researchers at Berkeley have a different idea: don’t use a bigger battery, but simply replace the battery in flight. 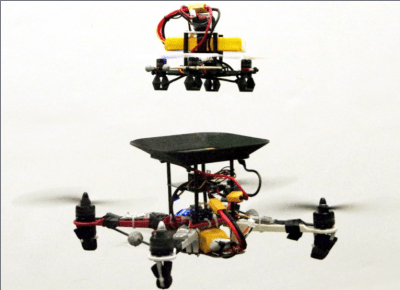 In theory, it sounds pretty simple. In practice, though, you really have two drones. The main drone and a smaller one that carries the battery back and forth. Of course, you also need a way for the drones to find each other and dock.

The devil is in the details. Do you put a separate battery on the flying battery or do you let it sip from the payload’s charge? Do you fly batteries away gracefully or just dump them? How do they find each other? All things for a designer to consider. You also don’t want to put two wildly mismatched batteries in parallel, so the design uses some diodes, a FET, and a relay to keep the power source to one battery at a time.

We’ve looked at hybrid drones that combine electric motors with internal combustion engines to try to solve this problem. Or just throw in the towel and use gas.

21 thoughts on “Flying Batteries For Drones”