If you hadn’t noticed, we had a bit of an FPGA theme running at this year’s Superconference. Why? Because the open-source FPGA toolchain is ripening, and because many of the problems that hackers (and academics) are tackling these days have become complex enough to warrant using them. A case in point: David Williams is a university professor who just wanted to build a quadruped robotics project. Each leg has a complex set of motors, motor drivers, sensors, and other feedback mechanisms. Centralizing all of this data put real strains on the robot’s network, and with so many devices the microcontrollers were running out of GPIOs. This lead him to become, in his words, “FPGA-curious”.

If you’re looking for a gentle introduction to the state of the art in open-source FPGAs, this is your talk. David covers everything, from a bird’s eye view of hardware description languages, through the entire Yosys-based open-source toolchain, and even through to embedding soft-CPUs into the FPGA fabric. And that’s just the first 18 minutes. (Slides for your enjoyment, and you can watch the talk embedded below the break.)

The second half of the talk is more about his personal experience and advice based on the last year or so of his experience going from FPGA newbie to master of his own robot. He highlights the versatility of a soft-CPU in an FPGA versus a pre-baked microcontroller solution. With the microcontroller you get all of the peripherals built into the silicon, but with the FPGA you get to write your own peripherals. Want a 10-wire SPI-like bus? Just code it up. Your peripherals are as simple or complex as you need them to be.

On the hardware side, David touts the PMOD standard (a man after our own heart!) and points out the large ecology of PMOD-compatible devices out there. Going for a plug-in solution also means that your engineering job is reduced to building a carrier board that can seat the FPGA brainboard of your choosing and interface it with a bunch of PMODs. It’s hard to get much simpler than that.

David is very much interested in the software layer as well, and encouraging re-usability of Verilog code among designs. Towards this end he’s written his own bus and interconnect standard, and a few modules that do things such as buffer data, process video, and so on. While we would have probably gone for the open-source standard WISHBONE interconnect architecture, David bundled a bunch of the possible signals together and called it a “pipe”. Compared to WISHBONE, David’s design makes a few judicious choices and thus streamlines interconnection greatly. He has code to go with it all, so have a look if you’re interested. We’re just speculating, but if you wrote a “pipe” to WISHBONE connector, you’d have the best of both worlds. 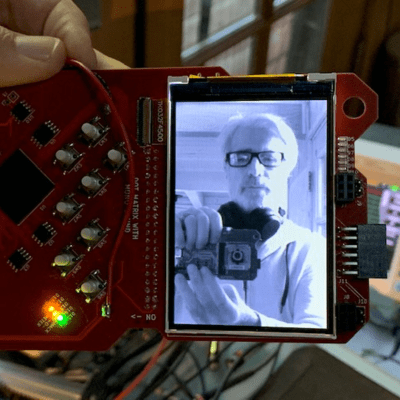 Finally, David isn’t just whistling Dixie. He took a video camera, plugged it into his Supercon badge via the cartridge slot, and had it displaying video in real time, all of this using pieces of code that he’d previously written and simply connected together with his “pipes”. A great demo is very convincing.

In sum, David’s talk is a great summary of the state of play in open-source FPGAs right now. Whether you’re getting your first taste, or are a moderately skilled FPGA developer, there is something for you here. And if anything, David’s call to end the fifty years of secrecy and IP-hoarding that have surrounded FPGAs is a rallying cry that we can get behind. We’ve gotten the tools in our hands now, and the hardware has become cheap and accessible. If you’re looking for a place to start, try the self-guided FPGA workshop from Supercon, and then maybe Al Williams’ FPGA Bootcamp. The time for a hacker FPGA revolution is ripe. To arms!

17 thoughts on “David Williams Is “FPGA-Curious””