As a concept, wearable technology excites many of us, but in practice, it’s been hard to nail down. Up to this point, the most high-tech thing the average person might reasonably wear has been a wrist watch. Devices like Google Glass tried to push the state-of-the-art, but it arguably raised more questions than it answered. It demonstrated in a very public way that developing wearable technology that’s simultaneously visually appealing, useful, and robust enough to handle daily life is exceptionally difficult. If Google couldn’t pull it off, what hope do we lowly hackers have? 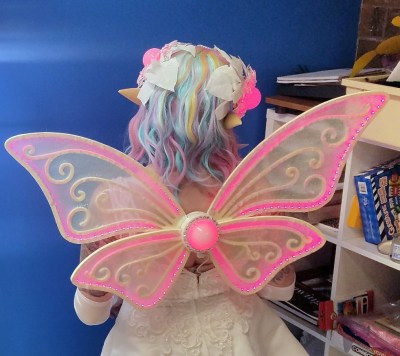 But maybe we’ve been going about things the wrong way. Compelling as the end result may seem, the move from wrist watches to head-mounted computers is simply too large of a technical and psychological leap to make. To help develop the skills and techniques necessary to build practical wearable electronics, it might help to take a slightly more fanciful approach.

It seems to be working pretty well for Angela Sheehan, at least. In her talk “Building Whimsical Wearables: Leveling Up Through Playful Prototyping” at the 2019 Hackaday Superconference, she went over some of the things she’s learned while developing her Color Stealing Fairy costume. The product of several years of iterative design, the costume is able to mimic colors seen in the environment through the use of a wireless sensor wand, and features a number of design elements that are critical to any successful wearable project.

Even if a custom RGB Fairy costume isn’t on your short list of projects, there’s information in this talk that will surely be of interest to anyone who’s even contemplated a wearable project. From technical aspects like battery placement to logistical considerations such as making adjustments for multiple wearers, Angela’s make-believe creation has become a testbed for real-world considerations.

Angela starts her talk by saying she isn’t a programmer or an engineer, but an artist who “crash landed” into the world of wearable technology. When she started this project, her goals were more emotional than technical. She simply wanted a way to recreate magical effects like those seen in movies, particularly the enchanted color changing dress from the animated Sleeping Beauty. She knew exactly where she wanted to go with this project, all she had to do was figure out how to get there.

As such, her first piece of advice for anyone looking to start their own project is to do something that excites them. Even if it’s just for your own enjoyment and serves no practical purpose, if you’re passionate about it, you’ll have the drive to keep pushing forward when you might otherwise have given up. All the while, you’ll be increasing your personal knowledge and honing your skills.

Coming from a more artistic background. Angela perhaps had a bit farther to go but she eventually found a workflow that played to her particular strengths. Describing herself as a “two dimensional thinker”, she approaches her designs conceptually as flat layers that stack up. She’s also found success sketching out her ideas in Adobe Illustrator, importing the design into her CAD software as a DXF file, and then extruding it into the third dimension. Interestingly, fellow wearable creator Sophy Wong utilizes a similar technique to bring her hand-drawn sketches into the physical world.

In taking on this project Angela checked a number of “firsts” off her list, from creating a custom PCB in Eagle to learning Fusion 360. Coming from a purely personal standpoint, her skills have come a long way since she committed to making her childhood dreams a reality. On these merits alone, the project has been an incredible success, and she’s a better and more well-rounded maker for it.

But in building the Color Stealing Fairy costume and sharing what she’s learned along the way, she’s done an invaluable service to anyone else working on their own wearable projects. Through both her talk at Supercon and the impeccably well documented Hackaday.io page for the costume, she reveals a wealth of information that you can put to use even if your ideal wearable doesn’t include giant glowing butterfly wings.

Perhaps the biggest lesson she learned is how rough the real-world can be on hardware. Between simply moving around and the fact that young children can’t seem to help but run up and throw their arms around her when they see the costume light up, the first generation of her laser-cut foam wings didn’t last long once they left the workshop. Not wanting to compromise on her goal of making the wings lightweight enough to wear comfortably, Angela eventually adapted the design to include Delrin ribs to add mechanical strength while maintaining the ethereal look.

She eventually embraced a modular design with connectors that can be quickly and easily undone, as it not only made repairs and maintenance easier, but meant she could take the costume apart to more easily transport it. She also realized that embedding the battery into the costume was not only inconvenient but potentially unsafe. In her case, the solution was to use a hip-mounted battery pack that always remains within reach.

The first time another person asked to use her costume in a performance was also a valuable learning experience. As the creator of the piece she was always very careful while wearing it, but once away from her almost maternal care, it was subjected to a much rougher handling than she anticipated. While the costume ultimately survived the ordeal unscathed, it did make Angela reflect on the challenges of “multi-user” wearable technology. For example, designing in sufficient adjustments so it can be fitted to different wearers without significant modification.

Angela’s talk wasn’t Fairy Making 101, nor does she presume that everyone in the audience is working on their own cosplay project. In reality, her talk is about the benefits of following your passion wherever it may take you, learning as you go, and not letting yourself get discouraged because you don’t (yet) have the knowledge to achieve your goals. 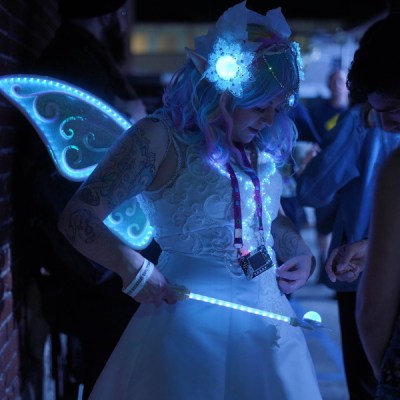 Calling it “inspirational” might be a bit heavy handed. After all, there’s a fairly high likelihood that most of the people attending the Hackaday Supercon have an oddball project or two back home that they’re inching to get back to. But it’s a fantastic reminder of why those sort of passion projects are so important. As hackers and makers, it’s sometimes easy to forget that every project we take on is a learning experience. Even if you’re a seasoned professional, working on the occasional “pointless” project is an excellent way to stay on the ball.

So whatever you’re excited about, keep building and iterating until it comes out just the way you want it. But don’t keep it to yourself. Take pictures, document the project, maybe even give a talk on it! There’s an excellent chance that somebody out there can learn from your experience, and in the end, that’s what this whole community is about.

4 thoughts on “Angela Sheehan Is Developing Wearable Tech With Whimsy”