By the late 1920s, the RMA was setting standards and one of them was the RMA standard for color-coding. The problem was that marking small components is difficult, especially back in the 1920s. 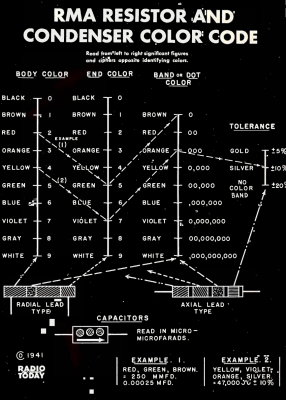 Ads in that magazine promoting resistors were careful to note that they were RMA color-coded. The code soon extended to capacitors (condensers, in the contemporary parlance).

The dot, as with printed piece of text on the cylindrical, might be hidden from view depending on the position of the resistor. So eventually, everyone switched to bands.

The colors are meant to follow the visible spectrum (remember ROY G BIV?). However, the RMA omitted indigo because apparently many people don’t distinguish blue, indigo, and violet as three different colors; indigo is really a tertiary color, anyway and Newton included it because of his interest in the occult, apparently. That leaves four slots, so dark colors represent the low end (black and brown) and bright colors the high end (gray and white).

Of course, none of this was funny if you were color blind. Reading a resistor with a meter or a bridge out of the circuit was certainly an answer. Reading one in a circuit, though, was another matter.

The Origin of E-Series Values

In 1952 the International Electrotechnical Commission (IEC, another standards group) defined the E-series which dictates what values resistors come in so that you get equal spacing on a log scale for resistors. If that sounds confusing, consider an example.

The E12 series is for 10% resistors and the values on it give you 12 values per decade. The base values are 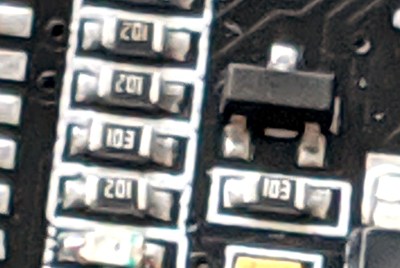 Next time you pick up a resistor and read the code from it, you can recall the history behind it all. The legacy of color bands carries over into the surface mount realm, not as color but as three digits representing the first two numbers and multiplier for the resistor’s value. These days many electronics like wireless modules and lithium batteries include a datamatrix (something like a QR code) on them. Honestly, I’m surprised that all components — through hole and surface mount — don’t have some form of micro data matrix on it that lets you point your phone at them and see their complete datasheet. Maybe one day.

224 thoughts on “Why Do Resistors Have A Color Code?”