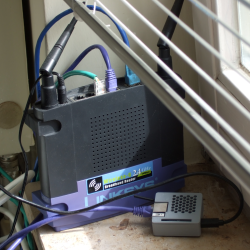 If you haven’t noticed, this is an absolutely fantastic time to be a hacker. The components are cheap, the software is usually free, and there’s so much information floating around online about how to pull it all together that even beginners can produce incredible projects their first time out of the gate. It’s no exaggeration to say that we’re seeing projects today which would have been all but impossible for an individual to pull off ten years ago.

But how did we get here, and perhaps more importantly, where are we going next? While we might arguably be in the Golden Age of DIY, creative folks putting together their own hardware and software is certainly nothing new. As for looking ahead, the hacker and maker movement is showing no signs of slowing down. If anything, we’re just getting started. With a wider array of ever more powerful tools at our disposal, the future is very literally whatever we decide it is.

In her talk at the 2019 Hackaday Superconference, “The Future is Us: Why the Open Source And Hobbyist Community Drive Consumer Products“, Jen Costillo not only presents us with an overview of hacker history thus far, but throws out a few predictions for how the DIY movement will impact the mainstream going forward. It’s always hard to see subtle changes over time, and it’s made even more difficult by the fact that most of us have our noses to the proverbial grindstone most of the time. Her presentation is an excellent way for those of us in the hacking community to take a big step back and look at the paradigm shifts that put such incredible power in the hands of so many.

END_OF_DOCUMENT_TOKEN_TO_BE_REPLACED

For many hardware enthusiasts, it’s hard to stop imagining the possibilities of an almighty fablab in our garage — a glorious suite of machines that can make the widgets of our dreams. Over the years, many of us start to build just that, assembling marvelous workbenches for the rest of us to drool over. The question is: “how do we get there?”

Ok, let’s say we’ve got a blank garage. We might be able to pick up a couple of tools and just “roll with it,” teaching ourselves the basics as we go and learning from our mistakes. With enough endurance, we’ll wake up ten years later and realize that, among the CNC mill, lathe, o-scope, logic analyzer, and the graveyard of projects on the shelves–we’ve made it!

“Just rolling with it,” though, can squeeze the last bits of change out of our wallets–not to mention ten years being a long journey while flying solo the whole time.  Hardware costs money. Aimless experimentation, without understanding the space of “what expectations are realistic,” can cost lots of money when things break.

These days, the internet might do a great job of bringing people together with the same interest. But how does it fare in exchanging the technical know-how that’s tied directly to tools of the trade? Can we get the same experience from a chatroom as we might from a few minutes with the local ‘CNC Whisperer’ who can tell us the ins-and-outs about tuning the machine’s PID controllers?

I’d say that we just can’t. “Getting started” in any subject often seems daunting, but we’re at a compounded disadvantage in that the gurus on the forum have some shared implicit knowledge and jargon on the subject that we wont have if we truly are taking our first steps. (Not to fear, though; none of us were born with this stuff!)

Ruling out forums for taking our first baby steps, where can we find the “seasoned gurus” to give us that founding knowledge? It’s unlikely that any coffee shop would house the local hardware guru sippin’ a joe and taking questions. Fear not, though; there are places for hackers to get their sustenance.

END_OF_DOCUMENT_TOKEN_TO_BE_REPLACED