We’ve all seen the two-color sequin fabrics you can “draw” on by dragging your finger over so the pieces flip to the other color. It’s fun stuff to play with, and very popular with the kids right now, but if you asked us if the material had any practical application we’d have said no. But that was before we saw this clever clock created by [Ekaggrat Singh Kalsi] that he calls Sequino. 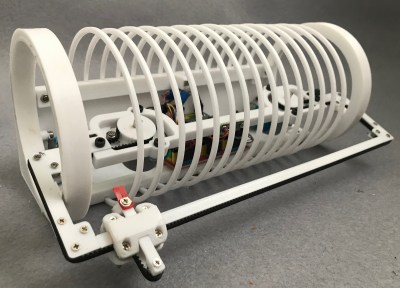 Since a clock (at least one that only shows hours and minutes) doesn’t need to refresh very quickly, [Ekaggrat] thought that the sequin material could work as a display. Of course the tricky part is figuring out how to actually draw on it reliably. It can’t be done from the back, and since the sequins are plastic, you can’t use a magnet. The only way to do it is with a robotic “finger” and some very slick kinematics.

The most obvious feature of the Sequino is the belt drive that goes the length of its cylindrical shape. When the two motors connected to the belt are turning in the same direction, the pointer is moved left or right. But when the motors turn in opposite directions, the tension on the belt forces the pointer to extend and contact the sequins. It’s like an H-bot , but with the shortest ever Y axis. The front bar is moved up and down with rotating rings inside of the device. It will probably make a lot more sense once you watch the video of it in operation after the break.

[Ekaggrat] says this project was developed as part of his quest to build “doodle clocks” that draw out the time continuously. The advantage of using the sequin fabric is that it shouldn’t be damaged by repetitive use, an issue he’s tried to solve via photonic means in the past.