Medical device company Medtronic released designs for one of their ventilators to open source for use in the COVID-19 pandemic. This is a laudable action, and there is plenty to glean from the specs (notable is that the planned release is incomplete as of this writing, so more info is on the way). Some initial reactions: medical devices are complicated, requirements specifications are enormous, the bill of materials (BOM) is gigantic, and component sourcing, supply chain, assembly, and testing are just as vital as the design itself.

The pessimist in me says that this design was open sourced for two reasons; to capitalize on an opportunity to get some good press, and to flex in front of the DIY community and convince them that the big boys should be the ones solving the ventilator shortage. The likelihood of anyone actually taking these specs and building it as designed are essentially zero for a variety of reasons, but let’s assume their intent is to give a good starting point for newer changes. The optimist in me says that after what happened to California over the weekend with 170 ventilators arriving broken, it might be nice to have open designs to aid in repair of existing non-functioning ventilators.

The design details released today are for their PB560 model, which was originally launched in 2010 by a company called Covidien, before it merged with Medtronic, so we’re already starting with a device design that’s a decade old. But it’s also a design that has proven itself through widespread use, and this data dump gives us a great look at what actually goes into one of these machines. Let’s take a look. 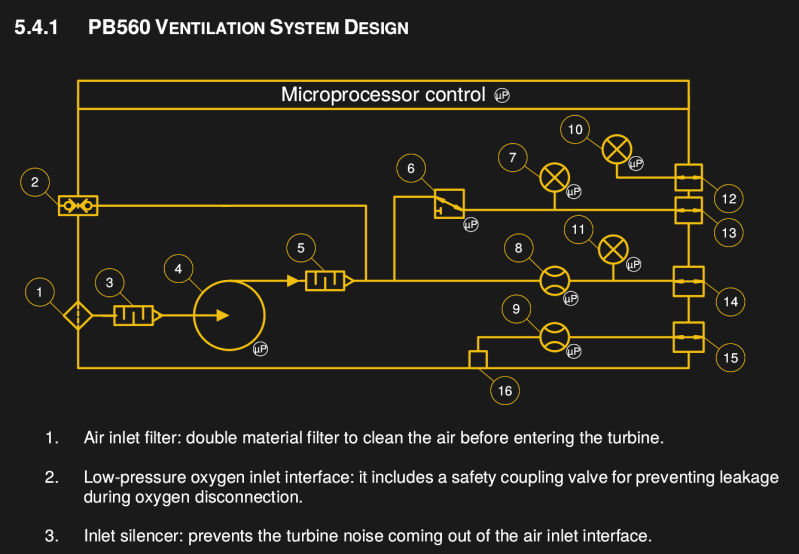 There are a few very long documents in this section, but the overview is that this describes a document for a medical device with a lot of features and a lot of requirements, designed and manufactured in an orderly timeline. Two points that are worth mentioning are that these documents are great for looking at all the technical requirements of a ventilator, and that many pages can be crossed off in the name of expediency.

The design functions around an ST10F27? (where ? is either an 8 or a B or a 3, depending on how you squint when looking at the PDF). There’s an ST10F273M that’s currently in active production by ST, so that might be it. There isn’t a full BOM available yet, but looking at some of the components shows that they are still available. There are no less than 4 different PCBs, with a main board, a board for the buzzer, a board for the power pack connection, and a board to control the motor.

There are lots of pretty pictures inside the manufacturing documents that show how the unit is assembled, with some overview documents that show the details of the assembly workflow. It seems there are some documents missing, though, because there’s nothing about the blower itself.

Despite it being a dump of 53MB, there’s quite a bit missing if you were trying to build this machine. However, Medtronic did mention in their press release that “…software code and other information will follow shortly.” so there are more details on the way. Here are the things we’d like to see:

Thank you, Medtronic. This is a great step, and we hope that useful information can be gleaned from this available design, and that others will follow your lead. While it’s not possible to recreate the product with the currently available files, it is a revealing view of the complexity involved in not just ventilators but any medical device.

We hope that this could be used to repair existing units that are not in service. Already, having the service manual and an explanation of the testing process is a huge help in this area. If they were also to release the mechanical design it would technically become possible to fabricate replacement parts to the original specifications if OEM replacements were for some reason unavailable.

However, we suspect that the amount of work that would be required to spin up assembly of this particular product is more than could be accomplished in the amount of time available, and the resources that would have to be mobilized are probably the same resources already working on building medical devices for other designs. The documentation around the release says any products released based on this are only to be used for COVID-19, so if anyone does manage to take this and use it to start production in a timely manner it will be both incredibly helpful, and super impressive.

Medtronic delivered on many of the missing documents, and have promised to release the rest soon. This release includes all of the mechanical design files, the electronic design files, BOMs, fixtures, and other components like wiring harnesses. It is yet another indication of the complexity of this product and the challenges that would have to be overcome to source all of the components needed to manufacture it.