For reasons that most rational consumers can’t fathom, a not inconsiderable segment of the population believes the key to their continued survival during a pandemic unprecedented in modern times is to stockpile toilet paper. This leaves those of us not compelled to act based on the whims of our bowels looking at bare racks in the paper product aisle more often than not.

Which makes it the perfect time for [Ariel Yahni] to develop his remote controlled toilet paper roll. With this gadget deployed, you just might have a chance at drawing the Karens away from all the rolled gold long enough to grab yourself a pack. Even if it doesn’t distract the other shoppers, you can at least enjoy the looks on their faces as it scurries by. 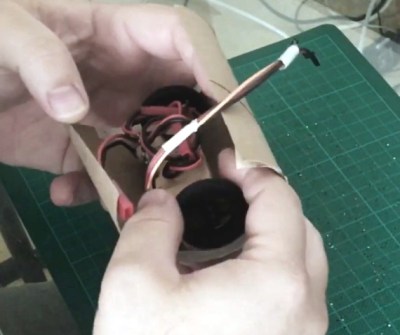 The project starts with, of all things, popsicle sticks. These are used to make a reinforced platform to which the two motors, radio receiver, speed controller, and battery are mounted. With some clever packing, [Ariel] is able to (tightly) fit it inside of a cardboard tube with just the bottoms of the two wheels protruding through cutouts. A careful wrapping with toilet paper is then used to give it the look of a partially used roll, including a trailing “tail” that flutters in its wake.

In the video after the break, you can see [Ariel] take his roll of motorized TP through a local mall for a test drive. We’re sorry to say that nobody appears to make a wild dive for it during the test. But that could be because the video was recorded back in December before people had resorted to fighting over toiletries. It also explains why he was able to get into a mall in the first place.

Just think, if we had embraced the high-tech toilets of the future back when we had a chance, we could have avoided this whole thing. As far as dystopias go, this one is shaping up to be pretty weird.