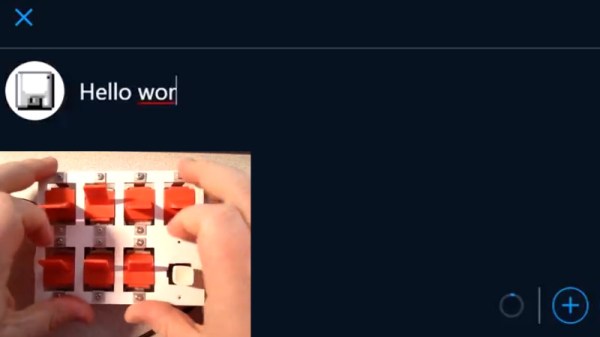 For most of computing history, keyboards have featured at least one key per letter one may wish to type – as far as the Latin alphabet goes, anyway. Mobile phones of the 90s and 2000s showed us that basic typing could be accomplished with less. [foone], however, likes to go way out into left field when designing text entry methods, and post them up on Twitter.

The most elegant, in our opinion, is this binary-based design. 7 flip switches are used to set the binary value of the key you wish to press, at which point hitting the button will send the keypress. It’s painfully slow for just about anything except backspace – set all the switches on for keycode 127, and mash away.

This breadboard design is an excercise in frustration. A keycode is randomly generated approximately once every second. Press the button if this keycode is the one you wish to send. Reportedly, it took ten minutes to type “Hello!”. An analog dial design speeds things up a little, but not by much.

While these may not be useful, they’re fun experiments which we could imagine making an excellent contest at a future hacker con. If you’re a big fan of the esoteric and insane when it comes to input devices, consider this typewriter simulation design.